This information shows the number of residential units authorized to be built by the building permits issued by the City of Austin. The way the information has been recorded changes with data sources and is not as uniform as one might wish, but it serves to provide a broad overview of development trends over the last half-century. The different data sources are listed below –

Here is a look at the trends that can be seen over 50 years of Austin’s residential development. 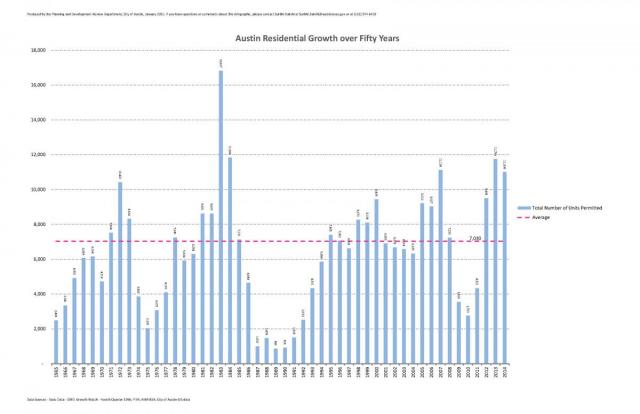 This graphic depicts the total number of residential units that were permitted by the City of Austin per year over the last 50 years. The data span the period from 1965 through 2014. Approximately 7,000 units were added per year, although as the graph shows, the distribution follows the economic booms and busts of the time period. The peak of unit supply was in 1983 when 16,817 units were issued permits. One can clearly see the effect of the Great Recession in the late 2000’s as well as the Savings and Loan Crisis in the late 1980s on the development industry. 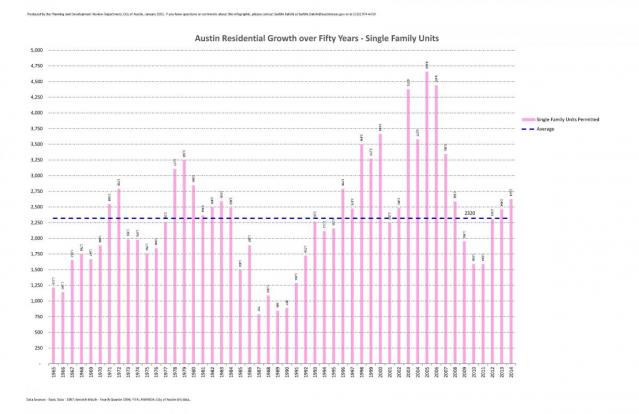 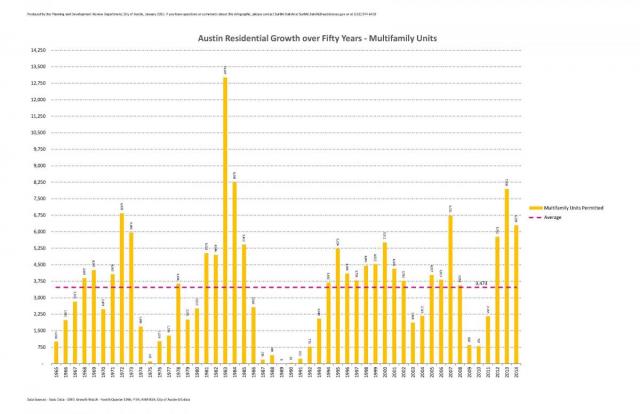 This graphic depicts the number of multifamily residential units that were issued building permits by the City of Austin per year over the last 50 years. The data span the period from 1965 through 2014. Approximately 3,400 units were issued permits every year. Multifamily residential development has been more prone to the vagaries of the economic cycle than single family development, as can be seen from the graph, going from a high of 13,007 units permitted in 1983 to a low of 8 units in 1989. 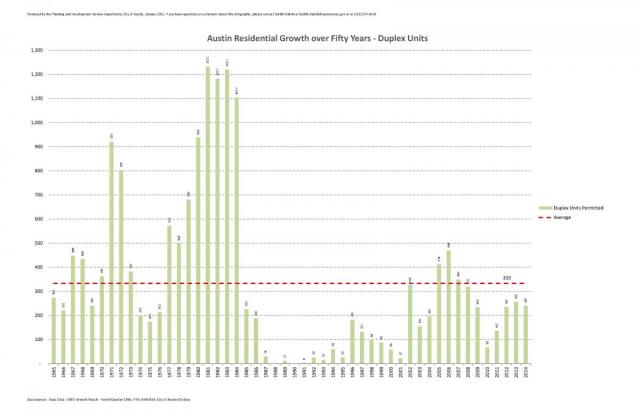 This graphic depicts the number of duplex residential units that were issued building permits by the City of Austin per year over the last 50 years. The data span the period from 1965 through 2014. The average number of duplex units permitted per year has been around 330, though as can be seen from the graph, this residential type formed a larger share of the unit supply in the first twenty years, from 1965 through 1985, peaking at more than 1,200 units in 1981. Very few units were permitted from 1986 through 2001. Over the last decade, the share has increased but not significantly. 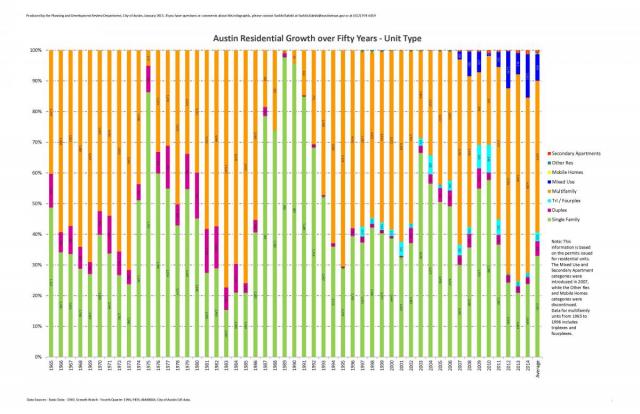 This graphic depicts the number of residential units permitted by the City of Austin per year over the last 50 years, categorized by unit type. The data span the period from 1965 through 2014. As can be seen from the data, multifamily permits were categorized as all structures with more than three units from 1965 through 1996. ‘Other Res’ and ‘Mobile Homes’ were discontinued as categories in 2006, while ‘Secondary Apartments’ and ‘Mixed Use’ were introduced as new categories in 2007. So comparing the data over the time period is not a precise effort. However some trends still stand out –

1. Multifamily residential development, as seen from the average and categorized as all development with more than 5 units per structure forms the bulk of supply, at almost 50%. This does not include the triplexes / fourplexes and mixed use structures from the later years.

3. Duplexes were more popular in the first 20 years; their share of the supply almost disappears from 1987 through 1999 and then forms a small share of the overall supply.

Disclaimer:
There is no guarantee that the all the building permits were built out and all the units were constructed. It is assumed that the each development was built out, which might not be the case for all the permits. It is also assumed that the information reported by the developers and / or retrieved from the different data sources is accurate and complete, although no warranty is made by the City of Austin regarding specific accuracy and completeness.
Tagged
Growth Watch
Residential
Residential Units
Single Family
Multifamily
Duplex
Triplexes
Fourplexes
Mobile Homes
Permits Issued
Austin
Planning and Development Review

With a strong economy and a rapidly-growing urban area, Austin attracts considerable development interest. The Growth Watch blog focuses on development in Austin, both residential and non-residential. It will look at proposed projects and emerging trends as well as related studies and resources.

For questions or comments regarding this blog, please contact DSDGIS.