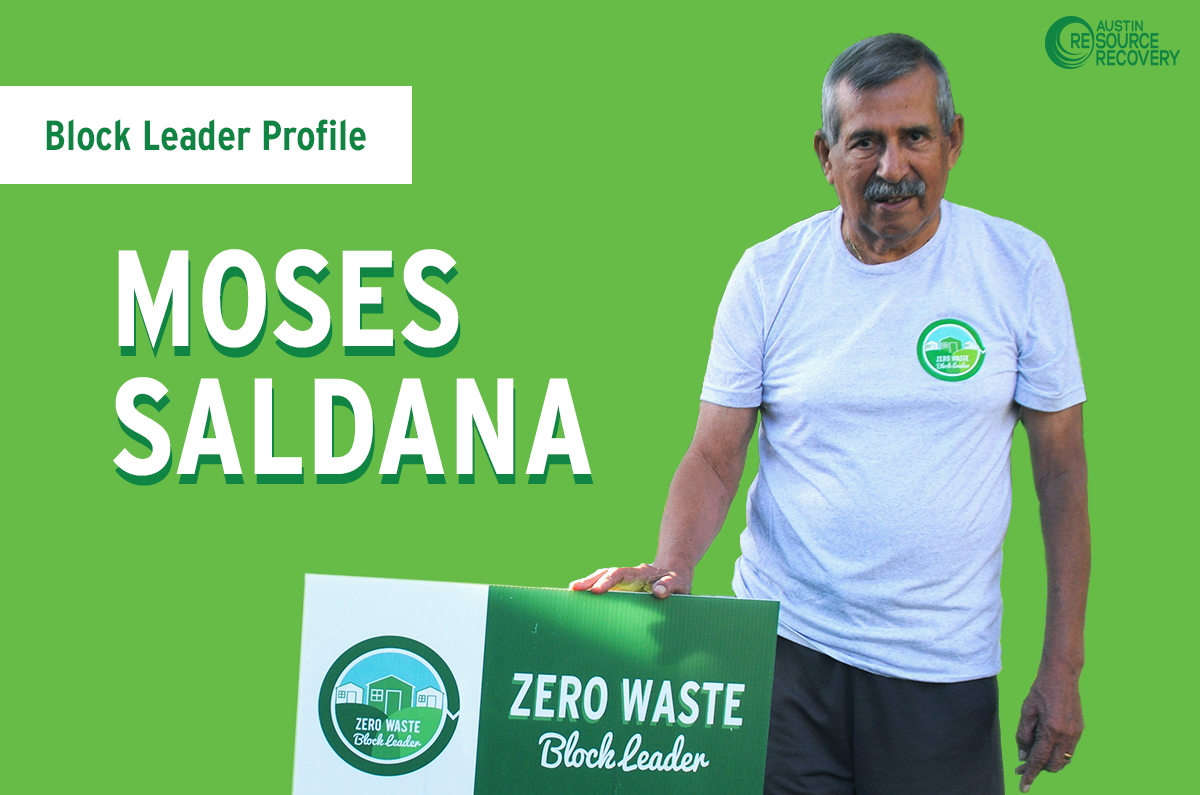 A native Austinite with a strong passion for taking care of our city, it was a no-brainer for Moses Saldana to become a Zero Waste Block Leader, a position he has held for over decade.

After serving in the Marine Corps for over 20 years, Saldana has actively been involved with the Austin community for 40 years in a variety of roles.  Saldana volunteered his time with the Public Safety Commission and Urban Transportation Committee three years each before becoming a Zero Waste Block Leader with Austin Resource Recovery.

I first got involved with this program while I was working in sales for Western Auto Supply Company and their building was right in the middle of my neighborhood. People thought that was my office and they would always call on me when something went on in the neighborhood. Residents always came up to me because they knew that I could help them or at least try to help them, whatever the issue was.  So, I kind of transitioned into a leader that way.

At that time, one of my big to-dos was to keep the street and neighborhood clean and since I live right along the corner of the street, I would go up and down picking up any trash or litter. A neighbor and I worked together to clean up the streets at least twice week.

A few years back, I noticed that people move-in and stay about five to ten years and move again so I make it a point to introduce myself and spread the zero waste message. For example, we have two neighbors from Nebraska who had never recycled before.

A neighbor and I took some of the door hangers and cards that Austin Resource Recovery hand out to kind of educate them. They really liked that since they didn’t know recycling was required here. Also, I have gatherings sometimes where I have my neighbors bring me their plastics, like plastic silverware. I wash them off and separate them to be recycled. I try to chat with my neighbors about what can be recycled and how recycled materials is moved further up the line to be remade into something else.
I go around the neighborhood and just try to make everyone aware of what we are doing here in Austin.

The bathroom and kitchen.

Recycling is more of my thing. Composting is a whole other ball game.

We have two of the small plastic two gallon containers in the bathroom and two extra ones that we put paper and recyclable materials in each container. They’re inside the house where we can easily access them. My family and I dump our recyclables about two times a week. I also use MySchedule to get reminders of when my recycling and my trash get picked up.

I just try to set an example for my son and wife to follow. When they see me doing the right thing, they follow what I do. Right now, my family and I are betting $100 to see who can recycle the most this month.

One big challenge is the different languages in Austin. It’s hard to communicate with people and visually demonstrate how to recycle when they don’t speak English

Also, people who are new to Austin get confused when they see the trash bin and blue bin. A lot of them just throw the trash in blue bin because they only had a trash bin where they came from so I really try explain to them which material goes where.

Out with the old, in with the new: where should old electronics go?

What is the circular economy, anyway?

'Tis the season... for extra recycling

Serve up your Thanksgiving feast, sustainably

What’s up with those violet trash bags appearing around Austin?

Composting is easy, let’s break it all down

Bawk to the future: How backyard chicken keeping began as a war effort

The truth about plastic bags

Gold in your green cart (and in your wallet)

Give a Great Story for a Waste-Free Holiday

What’s the Deal with Composting?

The Flaws of Straws

AMM Series: The Who, the What, then When, the Where, the Why