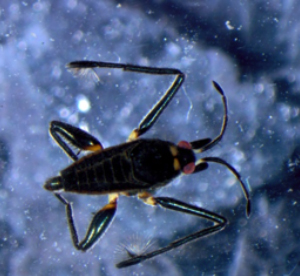 Although Texas winters can be mild, they usually aren’t warm enough to spend the day swimming and discovering nature. In the winter, nature experiences with aquatic animals are usually limited to the view while sitting on the bank of a stream. One of the more interesting insects that might commonly be encountered this way are water striders, which are in the order Hemiptera or “true bugs”. Water striders are those small, fast, long-legged athletes that zip across the surface of water effortlessly like an ice-skater. One of the most common families in this group that you are likely to encounter in Austin are the small and skittish “broad-shouldered water striders” called Rhagovelia.

It’s often hard to get a good look at Rhagovelia because they don’t sit still for long in between bursts of expert speed skating. Occasionally, large groups (50 or more!) of these bugs congregate at the edges of slow waters, appearing to be some kind of alien regatta. These armadas of insects quickly scatter at the drop of a hat, but if you’re fast, you can catch them (don’t worry they can’t hurt you). 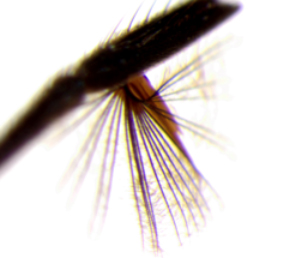 Rhagovelia is mostly black with silvery markings. The back four legs are long and do most of the swimming, while the front two legs are primarily used for grabbing prey. They are predators and will attempt to grab just about any other insect or crustacean that is small enough to eat that is on or just beneath the water’s surface. They generally aren’t used as indicators of water quality because unlike truly aquatic insects, they spend their life on top of the water and not in it. They are also able to move to different places when conditions aren’t good.

Photographs by Todd Jackson. More information and photographs of Rhagovelia can be found at: http://bugguide.net/node/view/164368