Lethocerus uhleri (a.k.a. “toe-biter” or “giant water bug”), is a large (~ 65 mm) aquatic insect in the Hemipteran or “true bug” order and is found throughout most of the eastern half of the United States. In our area the species approaches its western range limits in the central part of the state and is the largest aquatic bug you are likely to see. 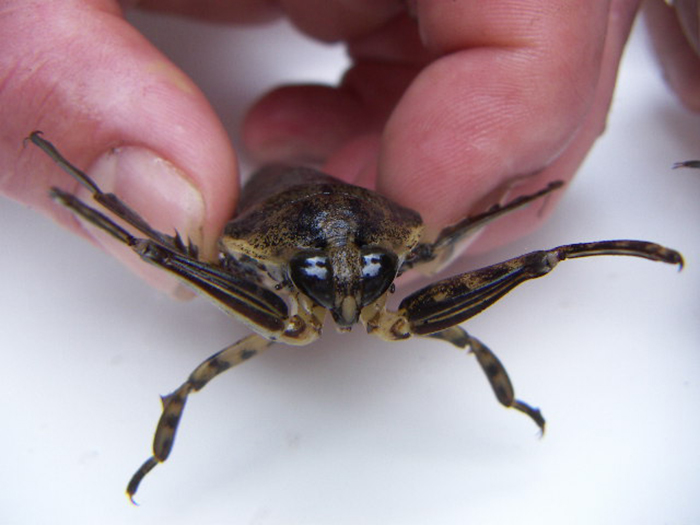 Lethocerus species can be found hiding among overhanging roots and vegetation that extend into the water in slow streams, ponds and wetlands. They are ambush predators that will feed on anything small enough for them to grab, and their diet often includes small vertebrates such as tadpoles, salamanders and smaller fish. While waiting for prey, Lethocerus uhleri can hang submerged for hours among the vegetation, obtaining oxygen through a respiratory siphon formed from two straps extending out from the end of its abdomen (similar to a snorkel). 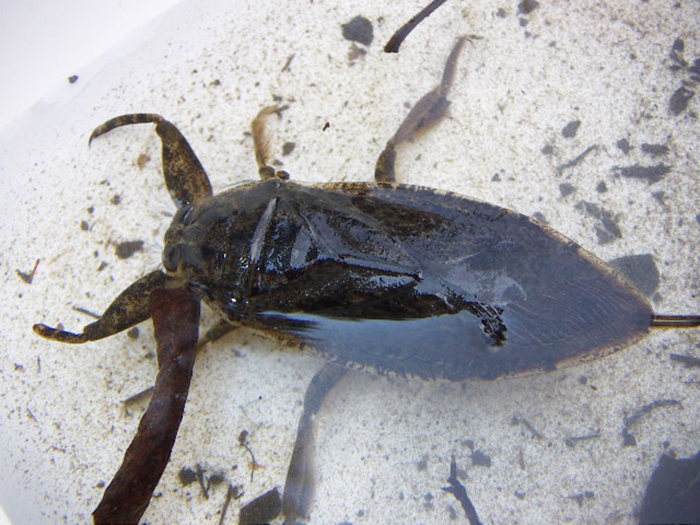 Lethocerus swimming (note the breathing siphon on the right).

They disperse during nocturnal flights (yes, they can fly) to find suitable habitat, and colonize ephemeral wet habitats where competition with larger predatory fish is reduced or absent. Like many other night-flying insects, flights can be disrupted by artificial light sources, because these insects would otherwise be seeking the light of reflected moonlight on water to locate new habitats. In “light” of this, it is rarely encountered in areas with significant light pollution and has a tendency to either be found in streams that are outside of town in less light-polluted areas or those with natural vegetation buffers. Biologists with the Watershed Protection Department of the City of Austin have observed L. uhleri in parts of the Bull, Barton and Onion Creek watersheds, and also in other streams on Balcones Canyonlands Preserve sites.