Hot enough for you? Unfortunately, Austin’s built environment creates a Heat Island Effect that makes summer temperatures in the city even worse and drives up energy use. It discourages walking too. (Think of the difference between a July stroll along a shady Hill Country river vs. walking across the sun-baked expanse of a mall parking lot.) As our city gets bigger and more built-up, the Heat Island Effect intensifies. Fortunately, cooling design strategies for our homes, buildings, paving, landscaping, and even our city as a whole, can help.

The City’s “Cool Spaces" website is a great resource on how to build or improve a home (or other property) in ways that fight the Heat Island Effect. It features six strategies, each with its own resource page:  Shade, trees, cool roofs, green roofs, green walls, and cool pavement. Try them for a pleasant cooling effect on your property -- and help Austin at the same time.

The Heat Island Effect raises air temperatures in a big city anywhere from 2-22 degrees F, according to the U.S. Environmental Protection Agency. (It has the biggest effect by preventing natural cooling-off at night.) That poses serious problems for people’s health, our environment, and energy and water consumption.

Why do temperatures get hotter in the city than in rural areas? The built environment (roadways, buildings, sidewalks, parking lots, etc.) absorbs and retains far more heat than the natural environment. Not only does the whole urban core gets hotter, but specific hot spots – like that expanse of blacktop parking lot – can become intolerable. Suburban places can have heat island hot spots too.

The heat island effect adds several degrees – to the temperature increases caused by climate change and associated drought. Local modeling shows that climate change alone could raise our average summer temperatures in Central Texas by several degrees, by mid-century. The hotter it gets, the more people increase their energy use to cool buildings – which only increases greenhouse gas emissions. It’s a cycle we need to break.

Hot pavement and rooftop surface temperatures heat stormwater runoff, which raises water temperatures in creeks, rivers, and lakes and can be stressful, even fatal, to aquatic life.  Hot buildings drive up demand electricity used for cooling, which leads to an increase in emissions from power plants – both air pollutants and greenhouse gases.  Dark roofs and impervious surfaces such as pavements can be as much as 50–90° hotter than shaded surfaces.  Read more about heat island risks. 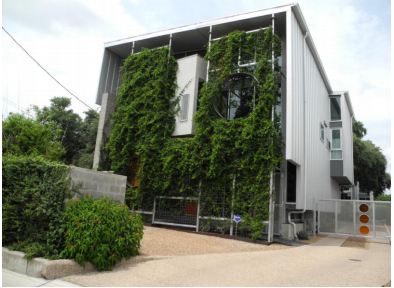 It bears noting that our automobile-oriented lifestyles contribute to the Urban Heat Island Effect, as many of the heat-trapping and -retaining elements of our city are products of our car culture:  wide roadways; driveways; parking lots; etc.  Houston is estimated to have 30 parking spaces per each city resident - each catching and retaining the sun's energy.  And our low-density building pattern produces more overall impervious, hard surfaces - rather than less.

Austinites can help reduce the Heat Island Effect -- by adding features that actively fight it when designing, constructing or remodeling a home or other building. So please consider adopting at least one of these six strategies at your home or business this summer. Go green and lighten up!