The Austin Nature & Science Center welcomed the wonders of Robot Zoo…a traveling exhibit based on the book by the same name and developed by BBH Exhibits, Inc. on September 13th, 2014.  This exhibit was so popular with kids that they would beg their parents to take them back not only twice but three and four times – so the exhibit was extended until January 27th!  Best of all it is FREE!!

Robot Zoo is a study of the form and function of real animals through their biomechanical counterparts – robots.  The history of robots is fairly recent.  Robots are machines with programmable computers.  The word “robot” came from the Czech author Karel Capek in his play R.U.R., written in 1920.  In the play, non-human workers were called robots.  The first “real” robots appeared in the 1930’s as Electro and his dog Sparko, the earliest electric-powered robots, was created in 1939 for the New York World’s Fair.
In Robot Zoo, the “animals” are mechanical, programmable robots displayed in the contest of their habitats.  On display you’ll see a bat, chameleon, giraffe, grasshopper, house fly, platypus, rhino and giant squid.  The robots in Robot Zoo show the amazing mechanics of living things (called biomechanics).  Bring your children by to explore ecology, biology and the branches of physics and engineering which comprises the mechanics.

Going through the Robot Zoo, children will learn about shapes, movement, special body parts called adaptations (like mouths), animal’s ability to sense/respond (through touch, smell, sight and radar) how and why different textures and coloring are important for animals, and much more!
Below are a few pictures and information explaining some of the exhibits that you and your children may expect to experience during the Robot Zoo.  Please come by for the Nature & Science Center’s last exhibit of the Robot Zoo now through January 27th during normal business hours. 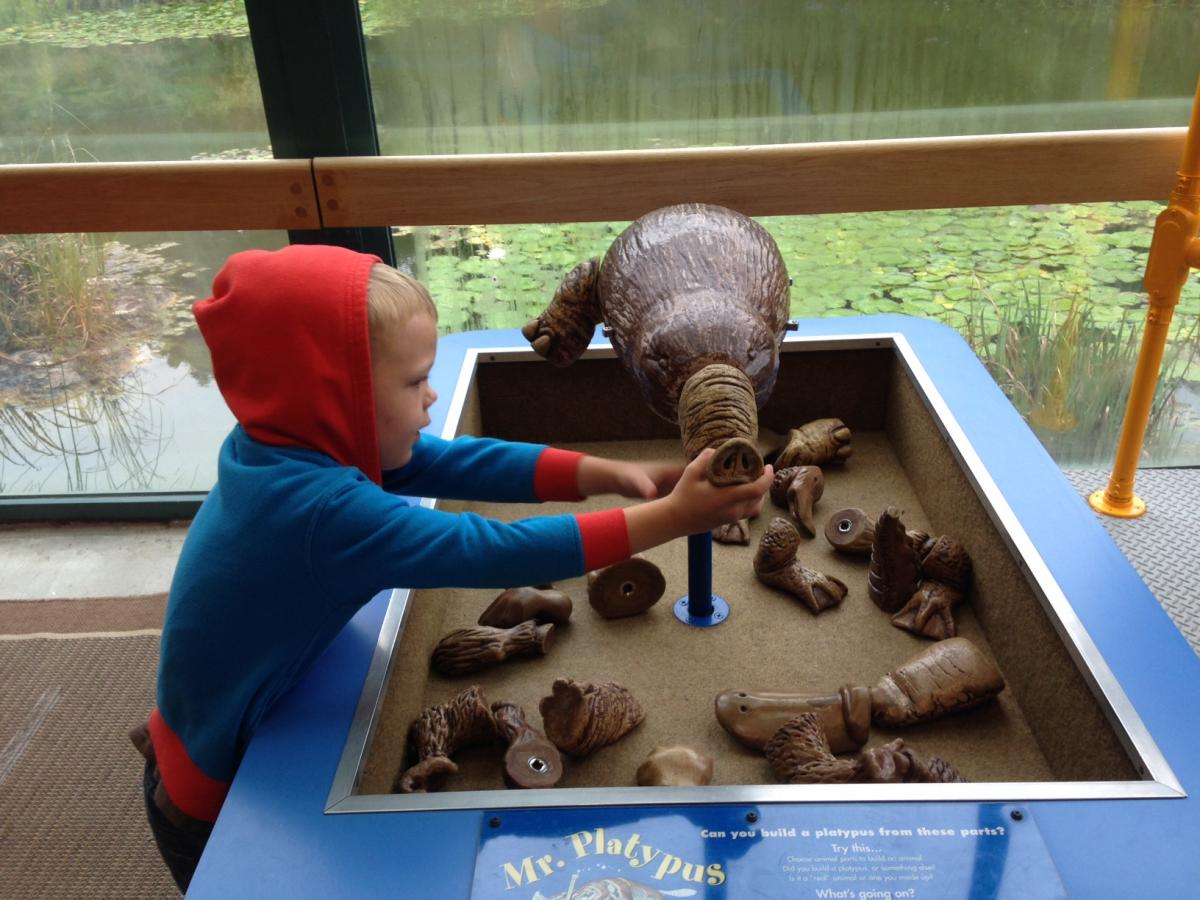 The platypus:  Interchangeable body parts encourage families to investigate and discuss how specific adaptations allow animals to behave in differently.  Here a young boy is proud of his platypus ele-platy-monk-odile. The simple machine: The Robot Zoo exhibit provides hands-on interactive demonstrations of how simple machines change the magnitude or direction of a force. Chameleon tongue photo:  Sharpshooters can fire the robot's rod-like tongue at several targets, demonstrating how a real chameleon shoots out its long, sticky-tipped tongue to reel in a meal.

*Some of the Robot Zoo information above was taken from a document crafted by WordCraft in Monterey, California.  Pictures were taken by the staff of the Austin Nature and Science Center.

May Park of the Month: Mayfield Park