Did you know that stacking rocks impacts soil, plants, and wildlife?

Rock cairns have traditionally served as trail markers, but have recently become trendy on social media. What’s the harm in stacking a few rocks for fun? Actually, this seemingly innocuous act often has a critical impact on the delicate balance of nature.

Also known as rock graffiti, stone stacks damage the ecosystem in a number of ways. This is especially true when the rocks are taken from a body of water.

Stacking rocks is harmful because:

If you love nature, Leave No Trace (LNT). There are seven LNT principles. The fourth principle speaks specifically to behavior such as stacking rocks. 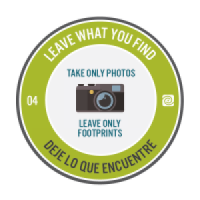 Leave No Trace Principle 4: Leave What You Find

Learn more and spread the word about Leave No Trace at AustinTexas.gov/LeaveNoTrace.