Parthenia Spring, the fourth largest spring in Texas, is fed by the Edwards Aquifer and discharges as part of Barton Creek. Before western colonization of the area, the Native Americans used the springs as healing grounds. Until it burned down at the end of the 19th century, a flour mill utilized part of the spring-fed creek. In 1917, Barton Spring was designated a city park. At the time, only manmade rock dams were built to create a pool for swimming, and after every flood, the dam would have to be rebuilt. In 1929, a permanent lower concrete dam was constructed, and the upper concrete dam followed only three years later creating Barton Springs Pool. A concrete tunnel beneath the north sidewalk of the pool bypasses all creek water from upstream of the pool (except during flood events), discharging the creek water into Barton Creek downstream of the lower pool dam. Although Barton Springs Salamanders inhabit Barton Springs Pool, it is open to the public year round with little to no human disturbance to the salamanders or their habitat.

Individual salamanders are usually observed around the main spring outflows, hidden within a 1 to 6" deep zone of gravel and cobble overlying a coarse sandy or bare limestone substrate. These areas are noticeably clear of fine silt or decomposed organic debris and appear to be kept clean by the briskly flowing spring water. Salamanders are also occasionally found around minor spring outlets within the limestone fissures.

Federal Conservation Status On April 30, 1997 the U.S. Fish and Wildlife Service (USFWS) added the Barton Springs Salamander (Eurycea sosorum) to the list of endangered and threatened wildlife which receive federal protection under the Endangered Species Act. In proposing the listing of E. sosorum, the USFWS cited the following concerns:

"The primary threats to this species are degradation of the quality and quantity of water that feeds Barton Springs due to urban expansion over the Barton Springs watershed. Also of concern is disturbance to the salamander's surface habitat in the pools where it occurs. This action implements Federal protection provided by the Act for the Barton Springs salamander." (USFWS, 1997 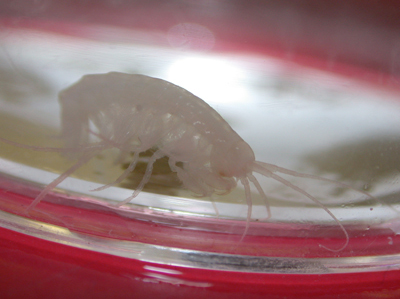 Around 1903, Andrew J. Zilker and the Elks Club built a concrete amphitheater around Eliza Spring for keeping cool during meetings in the summer. The amphitheater allowed for the pre-existing spring run to follow its natural course. A few decades passed and the natural spring opening was covered with concrete to form a solid base for the amphitheater. From this point on, the only inflow from the aquifer into Eliza Spring is a series of small (6-8”) upwelling holes and a series of 15 vents around the base of the lowest bench of the amphitheater. Outflow has since been altered to follow a concrete tunnel underground and to discharge into the Bypass beneath the north sidewalk at Barton Springs Pool.

The only known surface habitats of the Barton Springs Salamander are the Barton Springs segment of the Edwards Aquifer and its contributing zone. They have been found in all four of the springs collectively known as Barton Springs: Parthenia Spring within Barton Springs Pool, Eliza Spring, Old Mill Spring (Sunken Garden), and Upper Barton Spring.  They are most often observed in spring flow under gravel and small cobble a single to a few layers deep that is clear of fine sediment. Unobstructed interstitial space (the space between the rocks) is critical because it provides hiding space from predators and habitat for prey items (macroinvertebrates). When the interstitial space in filled with fine sediment or becomes compacted, the salamanders can no longer move within the safety of the substrate and the macroinvertebrates cannot colonize beneath the rocks. Salamanders are occasionally seen in bryophytes (aquatic moss) and macrophytes (aquatic plants) within the springs.

Surveys to monitor the population size of the Barton Springs Salamander are conducted on a monthly basis at each spring site. During these surveys, biologists carefully search the available habitat by removing stones and cover objects to a solid base (concrete, bedrock or compacted sediment) where the salamanders are typically hiding. Each salamander observed is categorized based on its size. Surveys are done in a systematic fashion to avoid counting any salamanders twice. Additional information is also recorded during these surveys, such as presence and abundance of benthic macroinvertebrates, and various measurements of water quality.

Below is a graph of the combined survey results for the Barton Springs Salamander over the past five years. As you may notice, there are large differences in the number of salamanders found at each site. Eliza Spring has, by far, the largest population of salamanders, followed by Parthenia Spring.

Another interesting trend is how widely salamander counts vary over time. This is important to biologists because their goal is to understand the factors that influence such fluctuations, as they have important consequences for the management and protection of this endangered species. 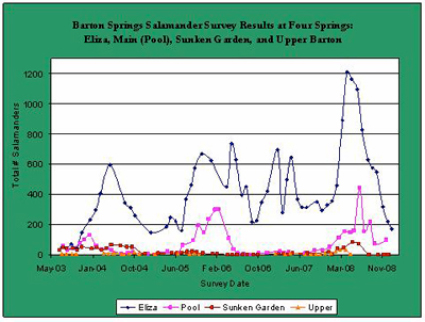 Eliza Spring has the most salamanders in part because large scale rehabilitation has occurred at this site. In late 2002, City biologists assessed the state of aquatic habitat in Eliza and its impact on the number of salamanders observed during a survey. At this point Eliza Spring had about 10 feet of water in it, had multiple layers of compacted rocks, trash and sediment as the substrate, and the outflow pipe was clogged with debris. Looking at the phylogenetic relationship of this species compared with other central Texas Eurycea, it was determined that the Barton Springs Salamander should be found in spring- or stream-like habitats, not pond-like habitat in Eliza.

This assessment brought on a reconstruction effort by City biologists to return Eliza Spring to more spring-fed stream-like conditions. Over the course of a year, trash and rocks were hand excavated by SCUBA diving in the spring and the outflow pipe was dislodged of all debris and native aquatic plants were reintroduced. By the end of the rehabilitation process, Eliza Spring was about a 1 foot deep and had a single layer of gravel/cobble on the concrete surface. The salamanders responded to this improved habitat. The graph below shows that on average the observed number of salamanders during surveys increased from the end of 2003 to 2008.

The response of the salamanders to rehabilitation at Eliza Spring has triggered efforts to improve the habitat at Old Mill Spring (Sunken Garden).  Like Eliza Spring, Old Mill Spring (Sunken Garden) has an accumulation of sediment, rocks, and garbage that need to be removed to improve flow in the spring and provide better habitat for the salamanders and their prey. 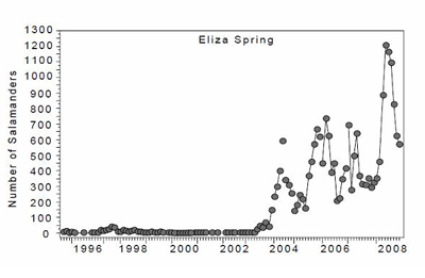 In the late 1800’s, Old Mill Spring, also known as Zenobia Spring, was developed as a grist mill, and as a gathering place. The National Youth Administration began a project building a Sunken Garden surrounding Old Mill Spring in 1938. Rock walls were built around the spring and stone terraced steps were constructed within the spring leading out of the spring pool.

The Barton Springs Salamander (Eurycea sosorum) was not formally described until 1993, despite being known from the springs for at least 50 years. It is a member of the family Plethodontidae, which is the largest family of salamanders. It is in the sub-family Spelerpinae (Chippindale, Bonett, Baldwin, and Wiens, 2004, Evolution, 58: 2809-2822; Macey, 2005, Cladistics, 21: 194-202), which includes four genera: Eurycea Rafinesque, 1822 (27 sp.) Gyrinophilus Cope, 1869 (4 sp.) Pseudotriton Tschudi, 1838 (3 sp.) Stereochilus Cope, 1869 (1 sp.). Eurycea sosorum is most closely related to other species that inhabit the Hill Country in central Texas, south of the Colorado River. All are members of the sub-genus Blepsimolge .

Upper Barton Spring is located upstream of Barton Springs Pool and is the only Barton Springs Salamander locality that is unaltered. It is an ephemeral spring that stops flowing when Barton Springs discharge is about 40 cubic feet/second. The salamanders retreat with the water level and are thought to live within the aquifer until the spring begins to flow again.