TPWD’s September 2013 vegetation survey of Lake Austin documented 203 acres of aquatic vegetation, mostly Eurasian watermilfoil (milfoil), which increased from 136 acres in June. The most notable change was the exotic plant hydrilla, which covered 330 acres in June but was not observed at all on the September survey.

Infesting the lake since 1999, this aggressive, invasive plant has posed significant public safety threats as its dense growth impacted flood flows, water intakes and recreation on the lake. It reached a historic high coverage of over 600 acres in February 2013, due primarily to the drought-induced warmer water that the plant prefers. The recent decline is a result of ongoing stocking of sterile grass carp that eat hydrilla, preferring it to other plants like milfoil.

As hydrilla declined, milfoil (a less problematic exotic) has increased and is providing critical ecosystem benefits like aquatic habitat, food and oxygen that helps keep the lake healthy without the extremely dense growth of hydrilla.

It is important to remember that hydrilla is under control but probably not eradicated; over time, the fish population will decline naturally and hydrilla may re-sprout from underground tubers. Changes in water flow and temperature can also impact growth rates, so the City and TPWD will continue to monitor Lake Austin vegetation and implement control efforts as needed. 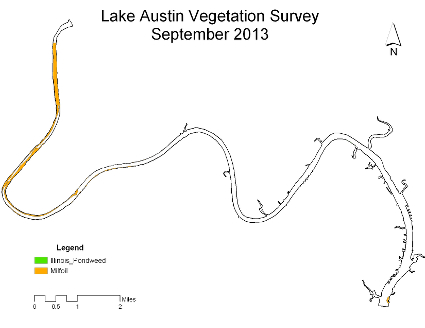 TPWD’s June survey documented 338 acres of the exotic plant hydrilla on Lake Austin, a decrease from the lake’s historic high of 588 acres in February 2013. As hydrilla decreases, the less aggressive exotic milfoil increased to 136 acre from 60 acres in February, making 474 acres of total vegetative cover on the lake. Most of these plants are concentrated from upstream of Emma Long (City) Park to the headwaters, with hydrilla growing in more than 12 feet of water, and only small areas reaching the surface. This is a significant change since last summer, when hydrilla covered 580 acres, and dense mats impacted recreational use of the lake.

The decrease in hydrilla can be attributed to the stocking of grass carp in the lake, with the latest addition in May 2013 bringing the rate to 55.5 fish per hydrilla acre. The fish had kept hydrilla in check from 2005-2010, and the plant coverage stayed below 80 acres throughout that period. But since 2011, Lake Austin’s warmer water and lower flow (due to drought-stricken Lake Travis) allowed hydrilla to increase steadily, and required an increase in the fish stocking rate to gain control.

The extreme low water level on Lake Travis means there is insufficient water available for re-fill after a lake drawdown, so it is not anticipated that the City will request that LCRA conduct a lowering of Lake Austin in January 2013. If Lake Travis water levels rise significantly in the months ahead, this option can be re-evaluated as additional vegetation control. TPWD will continue to conduct quarterly Lake Austin vegetation surveys, using the results to determine appropriate control actions for hydrilla. 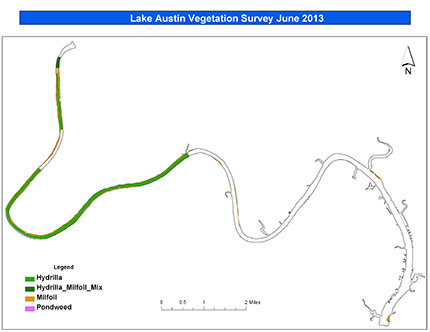 TPWD’s February 2013 Lake Austin vegetation survey (see map below) documented over 580 acres of hydrilla (out of 647 acres total plant coverage), a slight increase since last fall’s survey of 554 acres of hydrilla. This increase over the winter prompted TWPD to approve the stocking of an additional 9,000 sterile grass carp, which the City will purchase and stock at Mary Quinlan Park in early April . This fish stocking is part of an ongoing program designed to limit impacts from hydrilla without removing all beneficial vegetation from the lake.

Estimating loss of fish due to mortality and migration downstream, TPWD has determined these additional fish will bring the stocking rate up to 55.5 fish per acre of hydrilla. This elevated stocking rate was recommended to address the drought conditions favorable to the plants (limited flow, warmer water) that are expected to continue throughout this summer. TPWD anticipates surveying the lake again in June or July to measure the impact from the higher stocking rate. 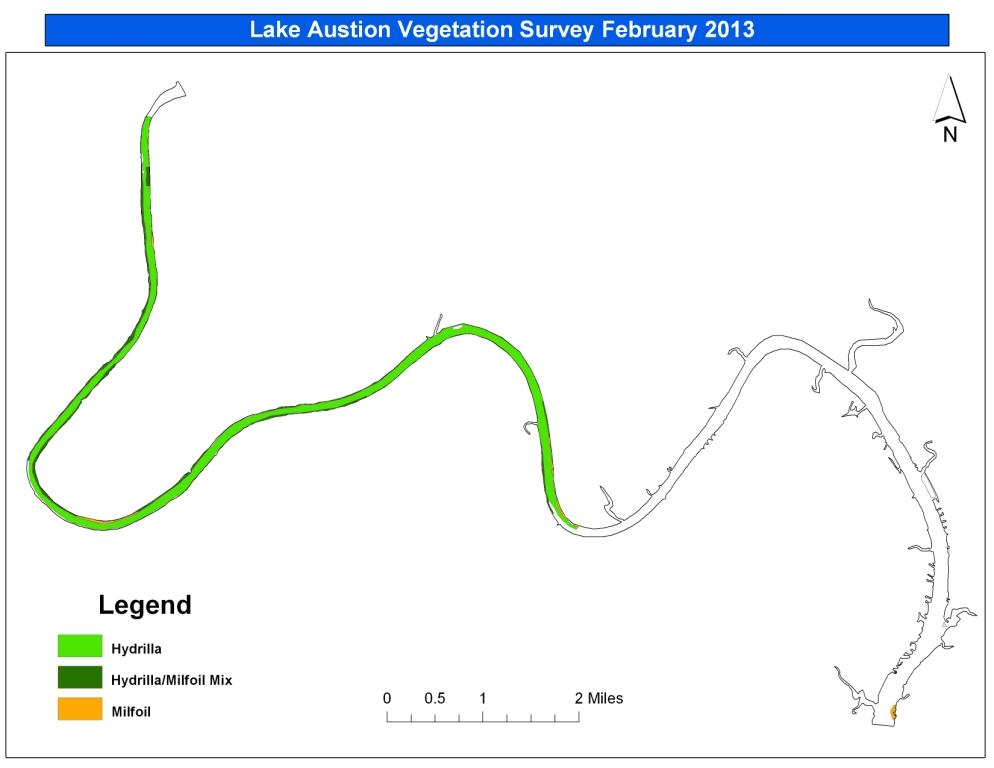 TPWD’s September 2012 survey showed a slight decrease in lake vegetation, with 554 acres of hydrilla, down from the April 2012 historic high of 585 acres. As a comparison, during the same period last year, hydrilla increased over 150 acres (see red arrows on graph below). While hydrilla coverage is still of great concern, and is a result of drought-induced warmer water and lower flow in the lake, this downward trend is encouraging, and is most likely due to the ongoing stocking of sterile grass carp. 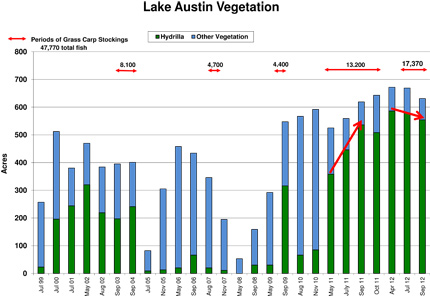 The graph above shows plant growth and fish stocked over time on Lake Austin.

The plants were kept in check from 2005 – 2010 primarily due to the large number of grass carp (fish that prefer hydrilla) stocked.   The City will stock 6,000 more grass carp in early November 2012, following this summer’s cooperative stocking of over 11,300 fish.  But it will take some time for these newly stocked fish to ‘catch up’ to the increased growth spurred by current environmental conditions.

Over 47,700 fish have been stocked in the lake since the program began in 2003, but with natural mortality and other losses, TPWD estimates the 2012 population to be around 27,770 fish.  At current hydrilla coverage, this means there are about 50 fish per hydrilla acre, which is a level TPWD expects to provide control, as coverage has increased whenever the stocking level dropped below that in the past.

While winter drawdowns can provide some control in areas less than 12 feet deep, hydrilla grows in depths well beyond the drawdown’s exposure, and affected plants grow back by the next summer.  LCRA has indicated that current water levels on Lakes Travis and Buchanan make a lake lowering unfeasible, but if water levels increase significantly this fall, that option will be re-considered.

TPWD approved 15,200 sterile grass carp for use in Lake Austin due to results of the April 2012 survey showing over 585 acres of  hydrilla in the lake.  This is 50% of the total number of fish stocked in the past nine years, and more fish than were stocked in all of 2011.   The City of Austin, LCRA and Friends of Lake Austin have agreed to share the cost of these fish.  However, current supplies of grass carp are very limited (2012 has been a banner year for hydrilla growth across the southern United States) so only 10,000 fish can be stocked at this time.  The City will release 3,000 of these fish on Wednesday June 20 at Mary Quinlan Park, and the remaining fish will be stocked in subsequent weeks.

The April 2012 Texas Parks and Wildlife Department (TPWD) survey showed over 585 acres of hydrilla in Lake Austin, with an additional 86 acres of milfoil and other vegetation, for a total of 672 acres of vegetative cover, a historic high. This map shows the extent of the infestation. 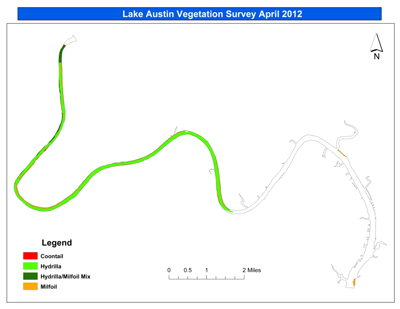 The increase is most likely due to the drought-induced low water levels on Lake Travis, making the deep water releases into Lake Austin warmer than normal. Hydrilla has been increasing steadily over the past year, and has now reached levels that can limit shoreline access as well as other lake activities.  This trend is expected to continue, especially since LCRA is not releasing water for rice irrigation in 2012, so there is limited water flow through the lake. 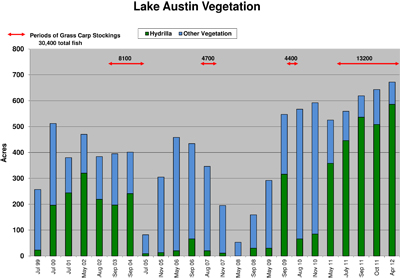 The graph above shows plant growth and fish stocking over time.

From 2003-2011, more than 30,000 fish were stocked in the lake (20,000 purchased by COA, 10,000 by TPWD), and for over five years, the fish were effective in keeping hydrilla below nuisance levels.  With the recent surge in hydrilla growth, TPWD approved an additional 15,200 grass carp, and the cost of these fish will be shared by the COA, LCRA and Friends of Lake Austin.  It is hoped that this large input of fish will provide a significant level of control, as the plants continue to grow and threaten uses of the lake.