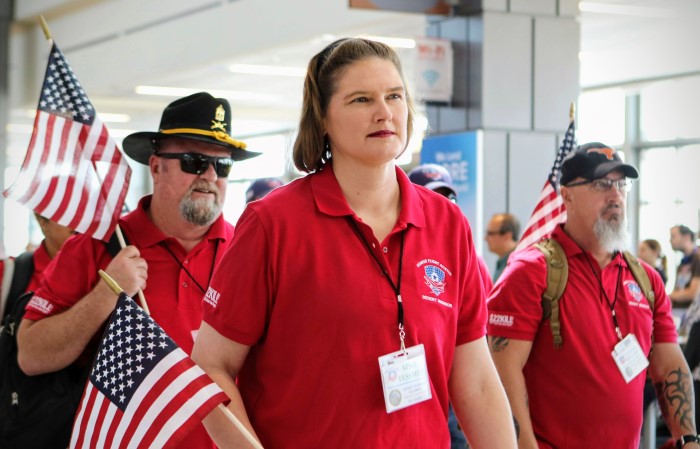 AUSTIN, Texas – On Friday, April 26, 2019, Honor Flight Austin departed Austin-Bergstrom International Airport to Washington D.C., transporting 60 veterans from the Gulf War, Iraq and Afghanistan to the nation’s capital to visit and experience the memorials built in their honor. This is Honor Flight Austin’s 58th overall flight, and the second flight of 2019.

The veterans arrived in the ticketing area at Austin-Bergstrom International Airport (AUS) at 9 a.m. The veterans, guardians, and staff assembled for a procession to Gate 21 around 10:30 a.m. The TSA Honor Guard and Austin Police Department Bag Pipes led the procession.

Honor Flight Austin departed Austin-Bergstrom at 11:45 a.m., and are scheduled to return to Austin Saturday, April 27, at 5:30 p.m.

Join Honor Flight Austin for a welcome home greeting at about 5:30 p.m. on April 27 upstairs in west ticketing.

Southwest Airlines operates the flight. The Hilton Austin Airport is a corporate sponsor of Honor Flight Austin. Lunch and refreshments are provided to veterans courtesy of ThunderCloud Subs. Trips on Honor Flight are made possible at no cost to the veterans through donations. The April 26 flight is sponsored by 22KILL, a non-profit organization committed to researching and understanding the issues connected with suicide.