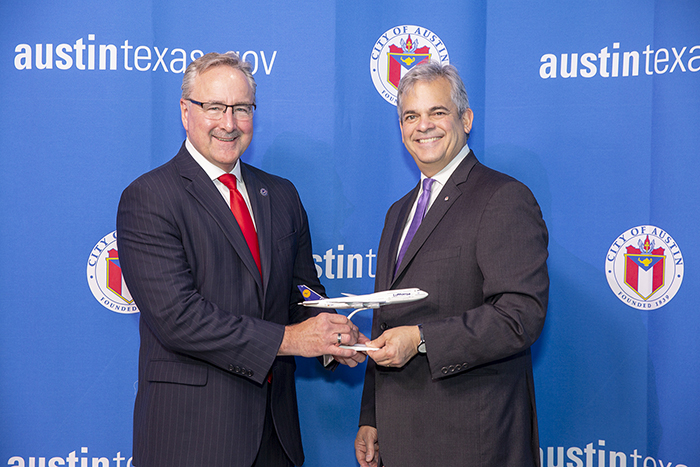 Lufthansa will operate the flight on the Airbus A330-300 in a three-class cabin configuration offering customers Business Class (42), Premium Economy (28), and Economy Class (185). Flights will be operated on Mondays, Wednesdays, Fridays, Saturdays, and Sundays. Optimally timed, flight LH469 will depart Austin at 4 p.m. and arrive at 9:05 a.m. in Frankfurt the following day. This flight offers passengers hundreds of connections to Europe, as well as Africa, the Middle East, and the Indian subcontinent. For passengers flying to Austin, LH 468 is set to take off at 10 a.m. from Frankfurt Airport, arriving in Austin at 2:05 p.m.

“We are thrilled to announce the launch of nonstop service between Austin, Texas and our Frankfurt hub in May of next year, which will offer Austin area residents a world of travel opportunities to more than 200 destinations in 100 countries from our European base,” said Matt Strong, Lufthansa Group General Manager Sales for the South Central region of the USA. “Those living in Texas’ state capital will now be able to experience Lufthansa’s outstanding service and premium product on long-haul travel routes.” 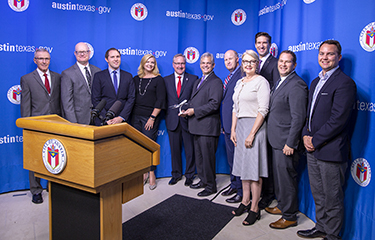 “This is a major leap forward for our community.  We are excited to continue efforts through Opportunity Austin to expand air service at ABIA which makes our region an even more desirable destination for job creators and talent,” said Doug Driskill, Austin Chamber of Commerce Vice Chair for Air Services.  “The new nonstop service to continental Europe, and the addition of an award-winning carrier in Lufthansa that will soon be serving Austin, is crucial to our region’s business recruitment and retention activities.  It also provides direct economic benefits to our local economy.”

“We are very excited with the announcement of Lufthansa Airlines new route between Austin and Frankfurt and welcome tourists from Frankfurt and beyond to enjoy everything Austin has to offer,” said Tom Noonan, President and CEO of Visit Austin. “Lufthansa has long been on Austin’s list for airline route expansion, and with year over year increases in visitors from Europe, we anticipate this flight will be extremely successful.”

Frankfurt is much more than Lufthansa’s main hub. It is Germany’s most international city – offering a rich blend of culture and history. With a population of approximately 5.6 million, the Frankfurt Rhine-Main metropolitan region is one of Europe’s leading economic centers and a popular travel destination. Frankfurt is Germany's financial powerhouse where the German Central Bank & the European Central Bank are both located.