What Is Arundo Donax?

Arundo donax (common name giant reed) is a member of the grass family that grows up to 20 ft tall, with dense compact roots that penetrate deeply into the soil. Flowers are 1 to 2 foot long plumes appearing in August and September.

What Problems Does It Cause?

It spreads quickly by fragments and root like rhizomes, developing into a monoculture that replaces native plants (using up to 3 times the water), and reduces wildlife habitat. As it continues to spread along Lady Bird shoreline, it should be considered as much a threat to the riparian area of Lady Bird as hydrilla is to the waters of Lake Austin.

Where Is It On Lady Bird Lake?

Arundo appears in patches along the shores of the lake but is most abundant near Red Bud Isle, the mouths of Barton and Waller Creeks and the “basin” area downstream of IH-35. Patches range from single plants to 6,000 square feet of dense growth. The plants grow between the water’s edge and the hike and bike trail, usually on fairly steep slopes. 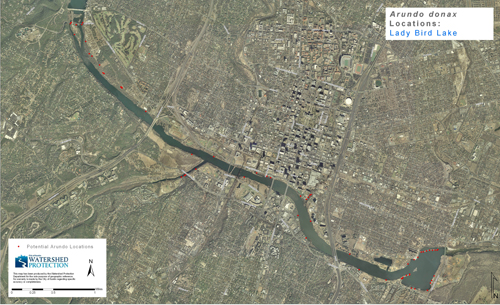 What Is Being Done About It?

The removal plan, developed with input from national and state invasive control experts, involved cutting the plants to reduce biomass, followed by herbicide treatment in the fall of 2011 as plants grew back. Follow up treatment was conducted in 2012 in areas that were not completely controlled in 2011.

Further treatment was performed in 2013, with some areas showing significant die-back of the plants. There was no action taken against Arundo in 2014 and 2015 due to concerns over slope stability at some of the sites. In 2015, all sites were re-evaluated and also looked at in terms of bank stability and potential for restoration with native plants.

Application of EPA-approved herbicide labeled for aquatic use (imazamox, trade name Clearcast™) will begin again in September 2016, using a licensed private contractor who specializes in such work. This particular herbicide was chosen to maximize Arundo control while still protecting the lake and nearby vegetation, and is suitable from both public health and environmental standpoints.

The City and The Trail Foundation have an active restoration program to aid the recovery of shoreline areas impacted by erosion, pedestrian traffic and invasive plants such as Arundo.  Treated patches of Arundo that have sufficient native vegetation surrounding them will be allowed to re-vegetate naturally, while areas that have had larger stands of Arundo removed will be planted with native, drought tolerant grasses and woody plants.

What Can I Do?

Volunteers interested in treating Arundo donax along their adopted parks or creeks may click here to learn more about this restoration technique. If you’re interested in adopting a park or creek, contact - Austin Parks Foundation or Keep Austin Beautiful.