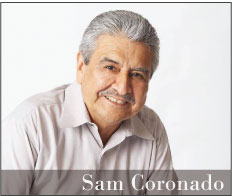 The Sam Z. Coronado Gallery honors one of the most important figures in Austin’s Latino arts community. An accomplished visual artist who specialized in printmaking, Coronado was instrumental in establishing many foundational Latino arts organizations, from the Chicano Art Students Association he helped create as a University of Texas student to the Mexic-Arte Museum, the state’s official Mexican and Mexican-American art museum, which he co-founded in 1984 with Sylvia Orozco and Pio Pulido.

Coronado believed in fostering and promoting fellow artists; in addition to his 25-year teaching career as a professor in Austin Community College’s Visual Communications Department, he established the nonprofit Serie Project, an organization dedicated to promoting Latino art through the historically relevant medium of seriography (screen printing), in 1993. Through Coronado Studio, the commercial screen-printing studio he started in 1991 to offer affordable printmaking services, the Serie Project has hosted more than 300 artist residences and furthered the careers of many printmakers, curators and historians. In 2002, the Coronado and the Serie Project became founding members of Consejo Grafico, the first nationally recognized consortium of Latino printmakers in the United States.

Born in Ennis, Texas, in 1946, Coronado began his artistic career in 1969 as a technical illustrator for Texas Instruments following service in the U.S. Army. He earned a bachelor of fine arts degree in 1975 from the University of Texas at Austin, where he and other students established the Chicano Art Students Association to provide more representation and opportunities for Hispanic art students.

First as a painter, then as a printmaker, Coronado was noted for exploring his personal history and identity through his art, while simultaneously encapsulating the Mexican American experience. His work appeared in solo and group exhibitions worldwide and earned him several lifetime achievement awards from the Emma S. Barrientos Mexican American Cultural Center, the Austin Visual Arts Association and the Mexic-Arte Museum, among others. In February 2013, UT-Austin’s Center for Mexican American Studies renamed its poster scholarship competition the Sam Z. Coronado Student Poster Art Scholarship Contest. Coronado passed away in November 2013; in February 2014, ESB-MACC rededicated its main gallery in his name.

Coronado will be forever remembered not only for his professional achievements, but for his patient and kind demeanor and his warm-hearted and welcoming nature, which heartened and inspired all who knew him. His legacy lives on through every exhibit displayed in the Sam Z. Coronado Gallery.