Continued change marks the past, present and future of this historic park

The park stands out as a block of green in the midst of towering skyscrapers, parking garages and busy traffic. Its downtown location and quiet existence make it a perfect place for Austinites to take a breath before plunging back into their busy lives. For this reason, Republic Square has been a favorite public gathering place since Austin began.

The Past Lives of Republic Square

While Republic Square may only measure 1 acre, its history is anything but small. When Austin was founded in 1839, its original layout included four squares set aside for public use. While one of the squares was never developed as a park and eventually became property of AISD, Wooldridge, Brush and Republic Squares were Austin's first parks and are still enjoyed today.

Later in 1839, City lots were sold under the shade of one or more live oak trees on Republic Square. Restoration of the trees - known as the Auction Oaks - was a central part of Phase I improvements.

In the early 1870s, Mexican immigrants began arriving in Austin in large numbers. Most moved to the area just south, southwest and west of the square. Newspapers from that time show that Mexican residents of the area celebrated Diez y Seis de Septiembre, marking Mexico's (and Texas') independence from Spain, in the public square. Celebrations here continued until 1927, when Mexican cultural and patriotic events moved to Austin's east side, first at Riverside Park and then permanently at Parque Zaragoza. 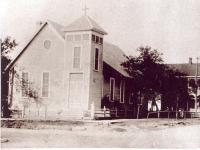 By 1905, the neighborhood to the west and south of the square was largely identified with Austin's Mexican population. Three Hispanic churches were established within 1-2 blocks of the square. In 1907, Our Lady of Guadalupe Catholic Church (pictured at left) was built directly across from and facing the square, at the northeast corner of Guadalupe and West Fifth streets. In 1917, a parochial school associated with the church was established next to the church.

In the 1960s, the park was converted to a parking lot. Ownership of the square was contested between the city, county and state.

In 1974, the Sierra Club and PARD began discussions of converting the parking lot back to a public park. The restoration began in 1976 as part of the Bicentennial celebration. Several names were offered for the park, but the submission provided by the Lions' Club of Austin's - Republic Square - was chosen in tribute to the Republic of Texas.

Completed in January of 2010, Phase I of the park's improvements included building a new deck/stage, planting additional trees and removing berms, or man-made mounds of earth. 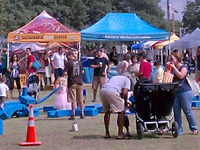 Today, Austinites still gather at Republic Square for a variety of events. The Alamo Drafthouse and Austin Parks Foundation host the Movies in the Park series here. During the summer, Yoga in the Park attracts residents to the square. And the weekly Austin Farmers' Market fills the square with local produce and lively crowds. Republic Square also has one reservable facility - a shady deck under the trees with removable furniture.

The park also sees daily use from those in the area, since there are more than 1,500 residents within walking distance of the park. Project Coordinator Terry Jungman said that because Republic Square is a passive environment in the middle of the bustle of downtown, many people working in the area spend their lunch breaks in the park. "It's a reflective environment," Jungman said.

The Parks and Recreation Department (PARD) recently began engaging the community regarding Republic Square's Phase II improvements through several channels. The team also plans to assess and update the existing Republic Square Vision Plan to turn it into a master plan. PARD Project Coordinator Andrew Linseisen said the goal is to "program how [the park] can grow in the next years to accommodate all the changes in downtown."

In other words, Republic Square will remain a gathering place in the midst of bustling Downtown Austin for years to come.

Phase I work was performed by the City of Austin Parks Forestry Division, Bartlett Tree Experts and Environmental Design, Inc. with TBG Partners, Inc. coordinating overall efforts. Funding was provided by the Austin Parks Foundation, through generous donations from C3 Presents, Inc. and from the 2006 Austin City Limits Music Festival, the Downtown Austin Neighborhood Association and the General Services Administration.

Interested in having a say in Republic Square's restoration efforts? Attend the next public meeting or provide your input on SpeakUp Austin or through the current online poll.