The North Austin Community Garden: Bringing residents together with art, dirt and tools.

The North Austin Community Garden: Bringing residents together with art, dirt and tools.

In an era of smaller lot sizes and high-rise living, community gardens offer resident the opportunity to connect with the earth and fellow neighbors. The North Austin YMCA takes these goals to a new level. When the North Austin YMCA was built, a percentage of the project cost was set aside for the purchase or commission of an art piece; the YMCA, in partnership with Art in Public Places, chose a community garden as their public art piece in the heart of the Rundberg neighborhood. 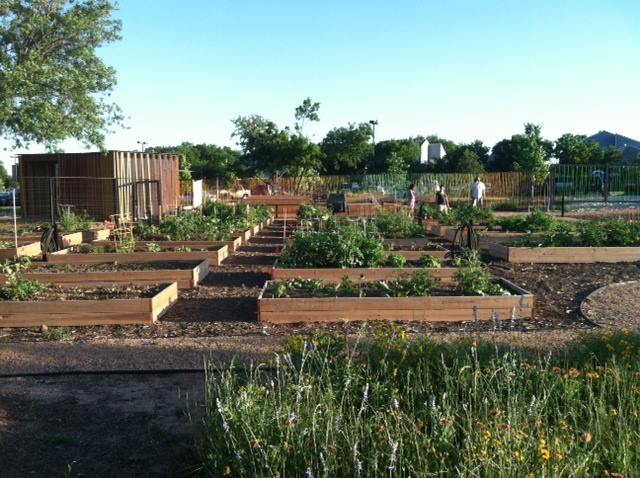 In 2012, local artists Lucy Begg and Robert Gay of Thoughtbarn were commissioned to design and build the garden. During the course of the project, the artists worked extensively with the local community through workshops and public events to develop the garden design. They also established the Garden Leadership Group, now led by community volunteers, to develop a governing structure, membership rules, and fees. As a result of these efforts, the garden officially opened for planting on March 29, 2014.

Co-designers Lucy Begg and Robert Gay have worked with the public before on numerous design projects, but say that on this project “public participation was particularly involved. We formed a Garden Leadership Group to manage the transition of the garden into community ownership. They were instrumental in setting up the social infrastructure of the project (by-laws, registration system, membership and site rules), which was as important for the garden’s success as the physical construction.” 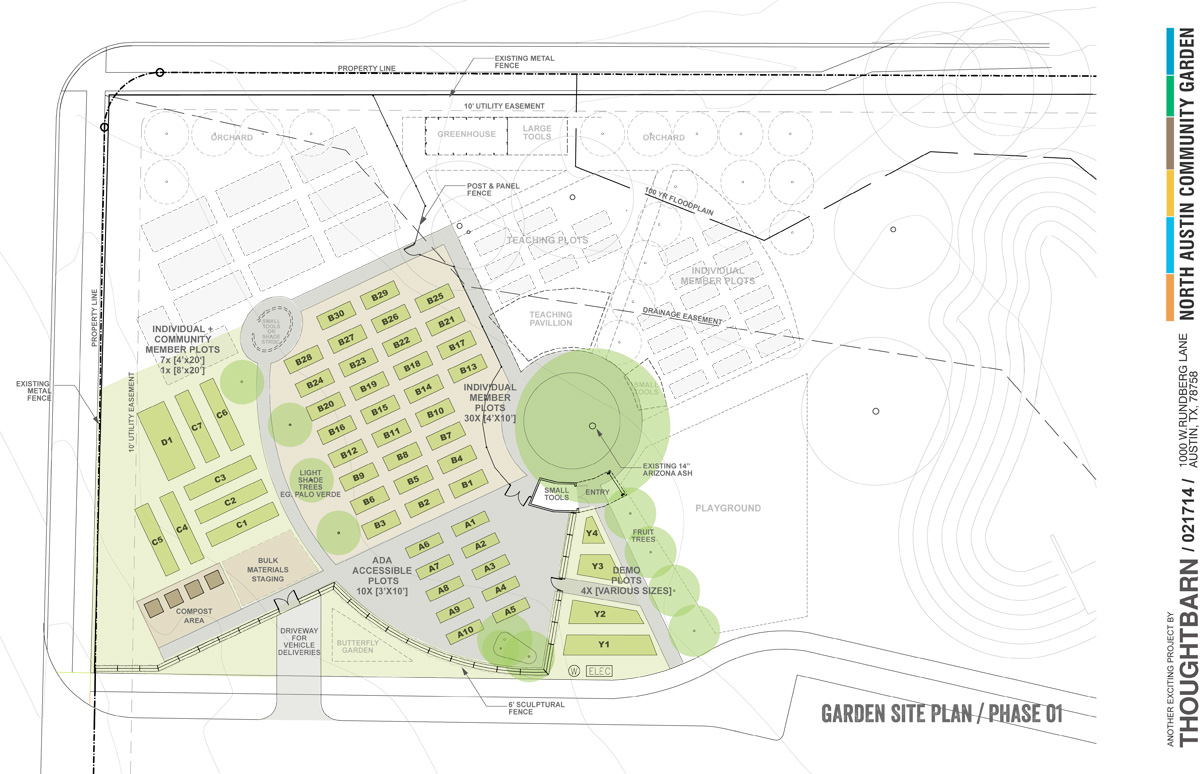 The North Austin Community Garden seeks to create a community gathering and work space that includes a teaching pavilion, teaching garden plots, a picnic area, and a butterfly garden. Maintained by volunteers, the garden offers organic gardening workshops through the Sustainable Food Center’s Basic Organic Garden Series, which educates residents and offers opportunities to increase understanding about the importance of nutrition. The garden offers anyone with a home address in the city, or who belongs to the YMCA, the chance at gardening on one of the 48 plots set aside for public use. As of now, most of the plots are full and producing food! There are plans for an expansion in the future, but for now the garden will occupy a beautifully designed space co-created by residents and designers alike.

We're delighted that the North Austin Community Garden has been shortlisted as a finalist for the SXSW Eco 'Place By Design' competition.  The award celebrates "breakthrough ideas in the reinvention of public space".  We were selected along with fourteen other finalists from a pool of applicants around the world. Winners will be announced on October 7th 2014 at the SXSW Eco Awards at the Austin Convention Center. - See more at: http://thoughtbarn.com/news/ymca-community-garden-sxsw-eco-finalist#sthash.1TOKvFy5.enfVvHaF.dpuf

The North Austin Community Garden has been shortlisted as a finalist for the SXSW Eco 'Place By Design' competition.  The award celebrates "breakthrough ideas in the reinvention of public space".  They were selected along with fourteen other finalists from a pool of applicants around the world. Winners will be announced on October 7th 2014 at the SXSW Eco Awards at the Austin Convention Center.

There are 50 community gardens in Austin -some on private land others on public- producing more than 100,000 pounds of fresh produce every year on a combined total of 3.6 acres. Each garden is different in size, plots available, and eligibility to garden.  If you’d like to get involved with a community garden near you, check the Coalition of Austin Community Garden’s website to locate and learn more.