Department » Parks And Recreation » Locations » Park Of The Month » August Park of the Month: Rosewood Park

When some people think of parks, images of playground equipment and other facilities for kids come to their minds. Others daydream of serene locations with picnic tables under trees. Some picture a mix of athletic and aquatic facilities, where people of all ages can get active or cool off while spending time outdoors. Rosewood Park has all of these facilities (and more!) - all within a neighborhood park in East Austin.

Rosewood Park's grassy hills boast several large, shady trees to keep many of the park's picnic tables cool during the summer. Rustic stone walls and steps lead to many of the park's features and add to its aesthetic. The park even boasts a historical landmark recognized by the Texas Historical Commission and by the City of Austin - the Henry G. Madison cabin, which was built around 1863 and donated to the City of Austin in 1968.

The beautiful and historic Rosewood Recreation Center sits in the middle of the old Bertram-Huppertz place, which Rudolph Bertram acquired in 1875. The older portion of the building was the residence of Mr. Bertram, a local storeowner in the early 1900s. After the death of Mr. Bertram's son-in-law, Charles Huppertz, 17 acres of land were sold to the City. In 1929, the department purchased Rosewood Park, and an after-school program began there. The department developed the land and park in the 1930s. Tennis courts, a picnic area, a bandstand, baseball fields and open spaces became available during this time.

Today, these features (and ones developed since then) are still used by the public. Tennis courts and baseball fields provide locations to get active. Both a bandstand behind the recreation center and a covered pavilion with restrooms (which can be rented for private events) set the stage for events in the park. The Doris Miller Auditorium and the Rosewood Recreation Center provide activities and programming for all ages. Park visitors in the summer will even hear sounds of children laughing and water splashing from the park's neighborhood pool and splash pad.

A big feature of Rosewood Park is its aquatics facilities. Rosewood Park boasts an often busy splash pad, which remains open until Sept. 9. Aquatics Division Program Manager Jodi Jay said the department renovated the facility from a wading pool into a splash pad in 2009. She added that the renovations focused on making features for a wide range of ages. "Splash pads are zoned for different age groups, so when we build them, we build features for different age groups," she said. 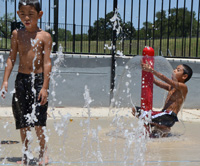 Rosewood's pool received renovations even more recently. According to Jay, the department renovated the pool this year using funds from the 2006 bond. "The pool received new tile, new deck in addition to new return lines," Jay said. "The previous ones were original and leaked water, so all the return lines were fixed." New fencing was also added, resulting in what Jay deemed a "total facelift of the facility." The department finished the renovations just days before the pool opened on June 2. It will stay open until Aug. 11.

Jay also said that general response to the renovations has been positive. In June alone, more than 7,500 people used the facility. "People just think it looks beautiful," she said. "The pool shell is still the original, but the upgrades were just so great that you can't even tell. It looks like a brand new pool." 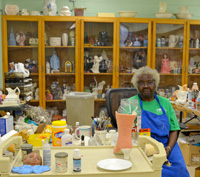 A short walk away from the splash pad and pool, the Doris Miller Auditorium sits near the front of the park. The auditorium was constructed in 1942 for the recreation needs of the Armed Forces and USO programs. The facility was named after Doris "Dorie" Miller, a hero at Pearl Harbor, and the first African American recipient of the Navy's highest honor, the Navy Cross. Today, the auditorium provides a location for the public to participate in a variety of activities and programs.

Rosewood Park is a warm contrast of historic and modern facilities that add to the recreation opportunities and development of the community. Renovated aquatics facilities, places for athletics and activities, shady picnicking spots, historic scenery and even event facilities - whatever you want in a park, Rosewood Park has it.

Rosewood Park is located at 2300 Rosewood Avenue in East Austin.