Art in Public Places (AIPP), a program of the City of Austin’s Cultural Arts Division of the Economic Development Department, is proud to announce the 10 artworks commissioned through the TEMPO 2015 temporary public art project. The artworks are now on display in local parks and City facilities. The community is invited to discover these artworks and attend special events throughout October and November. Visit austintexas.gov/TEMPO to see a map of the installations and more information about each artwork.

The TEMPO project launched in spring of 2015 with an open call to Austin-area artists to submit proposals for temporary artwork on City-owned sites. Ten proposals by eight individual artists and two artist teams were selected and will be installed for varying durations beginning in August 2015 and continuing through January 2016.

The selected artworks address a variety of themes –from Austin’s senior community to local cultural history to environmental issues. 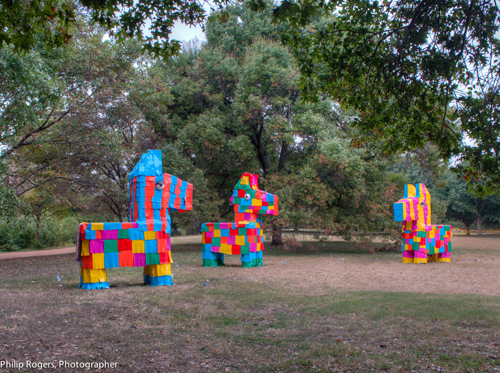 Artist David Goujon was inspired by the razing of the Jumpolin piñata store to create his sculpture Las Piñatas in District 3. Three, 10-foot- tall plywood and colored-paper piñatas burros now “graze” in Edward Rendon Sr. Park (at 1700 Nash Hernandez Sr. Road  and Chicon)and will be on view through November 22. Goujon says the sculptures note that "every act of creation begins as a form of destruction and every city will see the parts of itself die as it grows and expands."

Artist Annelize Machado took her inspiration from the Old Bakery & Emporium, a historic building located on Congress Avenue and 10th Street, and its mission “to celebrate the older adult as a gifted, contributing member of the community.” Machado’s short film Born and Bread features senior clients from the Old Bakery & Emporium as well as the South Austin Senior Center and Conley-Guerrero Senior Activity Center. The film will have its premiere screening on November 14 at the Old Bakery. 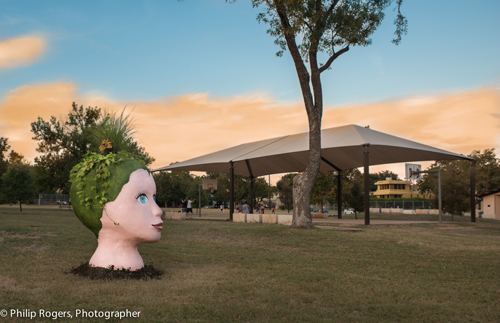 All 10 artworks will be on view during October and November. Check the project website, www.austintexas.gov/ TEMPO, for more information about each artwork.

Artists: Melissa Borrell & Hanna Lupico
Title: Sky Lines
When: October 3 to December 20
Where: Boggy Creek Greenbelt Park, 1114 Nile St.Special performances of “Under the Overpass at Skylines” by Dance Waterloo and Cindertalk November 21 & 22 at 7:00 and 8:00 p.m.

Other Installations now on view:

Get to Know a Local Business: Tots 'N Tutors

The Bare Bones Basics of Texas Business Entities
Get to Know a Local Business: 360 Signs