Brush Square is one of three remaining historic public squares from the 1839 Waller Plan for the City of Austin. The Brush Square Plan was adopted by City Council in 2019. This project is in the construction phase. District 9

Brush Square is one of the three remaining original downtown squares as envisioned in Edwin Waller’s 1839 plan for Austin. Brush Square is named after Seba Bogart Brush, a merchant, who used the Square to store cotton before his death in 1874.

Brush Square currently hosts the former residence of the author William Sidney Porter, better known as O. Henry, who resided in Austin (1893 and 1895, relocated to Brush Square in 1934); the former home of Susanna Dickinson, a famous survivor of the Battle of the Alamo (relocated to Brush Square in 2003; and the Central Fire Station No. 1, built-in 1938. The O. Henry Museum and Susanna Dickinson Museum are operated by PARD. The Fire Station was designed by Edwin Kreisle and Max Brooks and remains an important example of the Art Moderne style. It is still in operation as a fire station.

During the 1950s much of Brush Square was used as a parking lot. In 1969, the Parks and Recreation Board, with support from the Heritage Society of Austin, rejected a City of Austin plans to convert the site into a “fairly pleasing parking lot,” marking the beginning of the contemporary era of maintaining the park as a public open space.

In Spring 2018, the planning process began for the Square and was adopted by City Council in 2019. Phase I Implementation will begin fulfilling the vision of the 2019 Concept Plan.

The City of Austin Parks and Recreation Department (PARD) launched a vision planning effort for Brush Square in spring 2018. The approved 2019 Plan resulted in the funding to begin a Phase I Implementation Plan.

The Phase I plan includes the following goals: 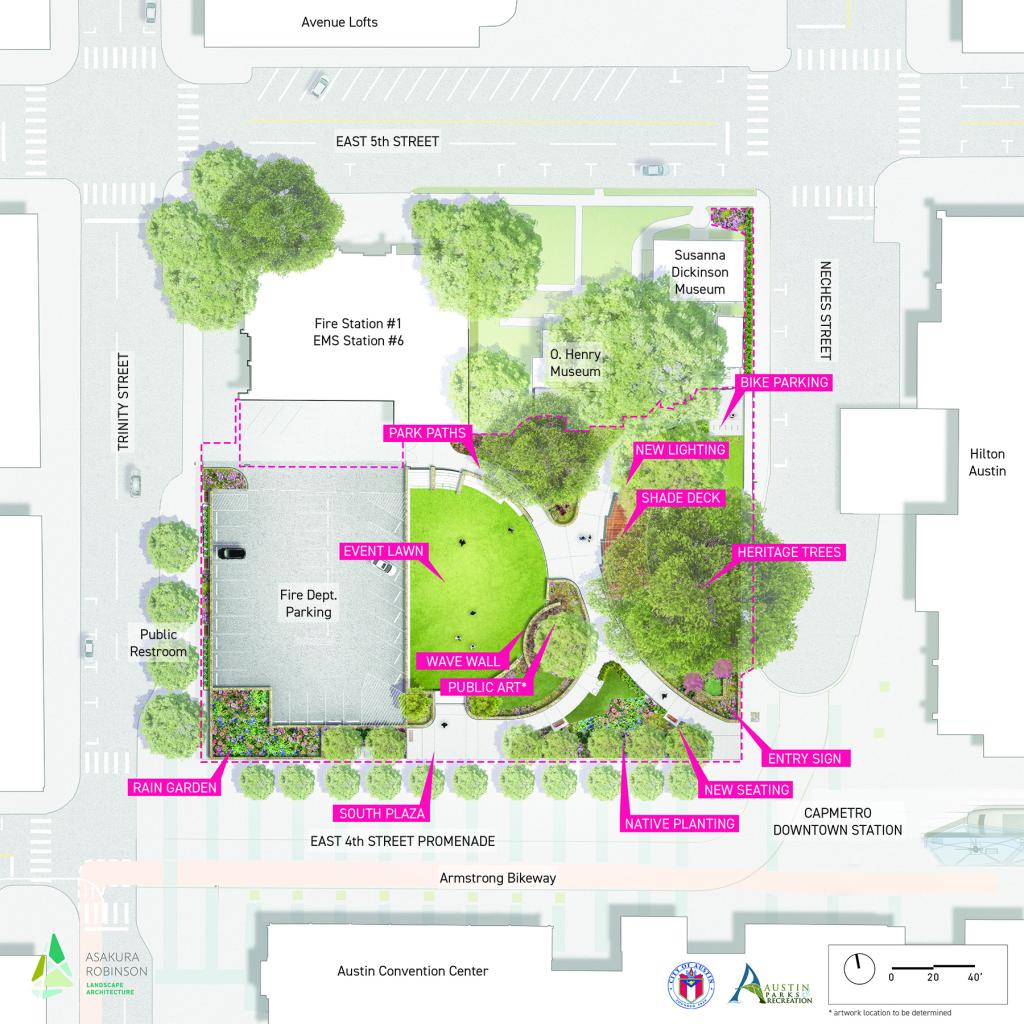 Please note that as in any construction project, schedules are projected as accurately as possible. All dates are subject to change due to the nature of construction and the weather.

PARD is working with the Convention Center, Downtown Austin Alliance, CapMetro, and other organizations to ensure the viability and long-term sustainability of Brush Square for all users. Current funding through the Hotel Occupancy Tax (HOT) is the primary driver for Phase I Implementation.

Discussions are underway to work with the Convention Center and the Transportation Department to identify relocation options for Austin Fire Department and EMS personnel during construction.

The funding for this project is made possible through Hotel Occupancy Tax (HOT) funding to support projects and initiatives that meet allowable uses as defined under Chapter 351 of the Texas Tax Code. HOT revenue is an essential tool for the promotion of tourism and supports the growth of the tourism, convention, and hotel industry. PARD is an important partner in this effort as public parks, museums, and cultural centers are among the top tourist attractions in the City.

The Brush Square Concept Plan* (PDF) was adopted by the Austin City Council on March 28, 2019. Explore the final Concept Plan* Report (PDF). Additional Information about the planning process is below.

* Please note: In 2020, PARD shifted from using the term "master plan" to describe all planning projects to other phrases that were more descriptive and could be used to identify the level of the planning process. For more information, please visit the Planning Terms and Definitions webpage.

The City of Austin Parks and Recreation Department launched a concept planning effort for Brush Square located in downtown Austin. Brush Square is one of three remaining historic public squares from the 1839 Waller Plan for the City of Austin and is located in the southeast quadrant of downtown. Funding for the concept planning effort was provided by the 2012 General Obligation Bonds for Downtown Squares.

The 2019 plan envisions Brush Square as a unique park for downtown Austin that is distinct yet complementary to other downtown squares and public spaces. Existing heritage trees will be protected and an array of native or adapted plantings will be added to provide visual delight and habitat. Shaded, small gathering spaces will be abundant as places of respite for nearby residents, workers, transit users, and event attendees. The square will also comfortably support larger events, such as the annual O. Henry Pun-Off.

The planning process engaged a wide range of participants including downtown residents, workers, tourists, and commuters as well as planning partners including the Brush Square Museums, the Austin Fire Department, the Downtown Austin Alliance, Preservation Austin, the Austin Convention Center, Capital Metro, and the Waller Creek Conservancy. The concept plan process resulted in cost estimates, phasing recommendations for short and long-term capital improvements as well as financing strategies. The Plan was led by Asakura Robinson, a planning, urban design, and landscape architecture firm.

Focus Groups
Focus groups were held throughout the project to focus on specific topics and to gather input on specific technical topics. The following focus group meetings took place: