A disaster-prepared and resilient community.

To serve as the coordinating focal point for preparedness, response, recovery, and education in any emergency or disaster that disrupts the community.

A native Texan, born in Rio Hondo and raised in Brownsville Texas, Juan attended the University of North Texas in Denton. He earned a Bachelor of Science Degree in Emergency Administration and Disaster Planning in May 1994.

The Commission announced the accreditation after conducting a peer-reviewed assessment of the City of Austin’s Office of Homeland Security and Emergency Management (Austin HSEM), which documented Austin HSEM’s compliance with 64 industry-recognized standards.

In 2012, the City of Austin was the first city in Texas to earn the voluntary five-year EMAP accreditation.

During area-wide emergencies, the EOC serves as the command center for the City of Austin and Travis County response and recovery operations.

A variety of communications tools and backup systems are installed in the EOC to aid in the receipt and release of vital information.

The EOC brings together City departments and regional partners to coordinate the flow of information and strategy development. A variety of organizations and government agencies send representatives during an EOC activation, depending on the type and severity of emergency.

HSEM staff are trained in the Federal Emergency Management Agency's Incident Command System. The Incident Command System (ICS), is a standardized, on-scene, all-hazards incident management approach. It allows for the integration of facilities, equipment, personnel, procedures and communications operating within a common organizational structure, enables a coordinated response among various jurisdictions and functional agencies, both public and private, and establishes common processes for planning and managing resources.

Read more about the Incident Command System on FEMA’s website. 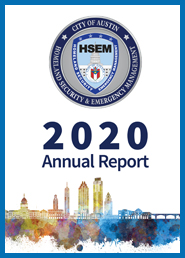