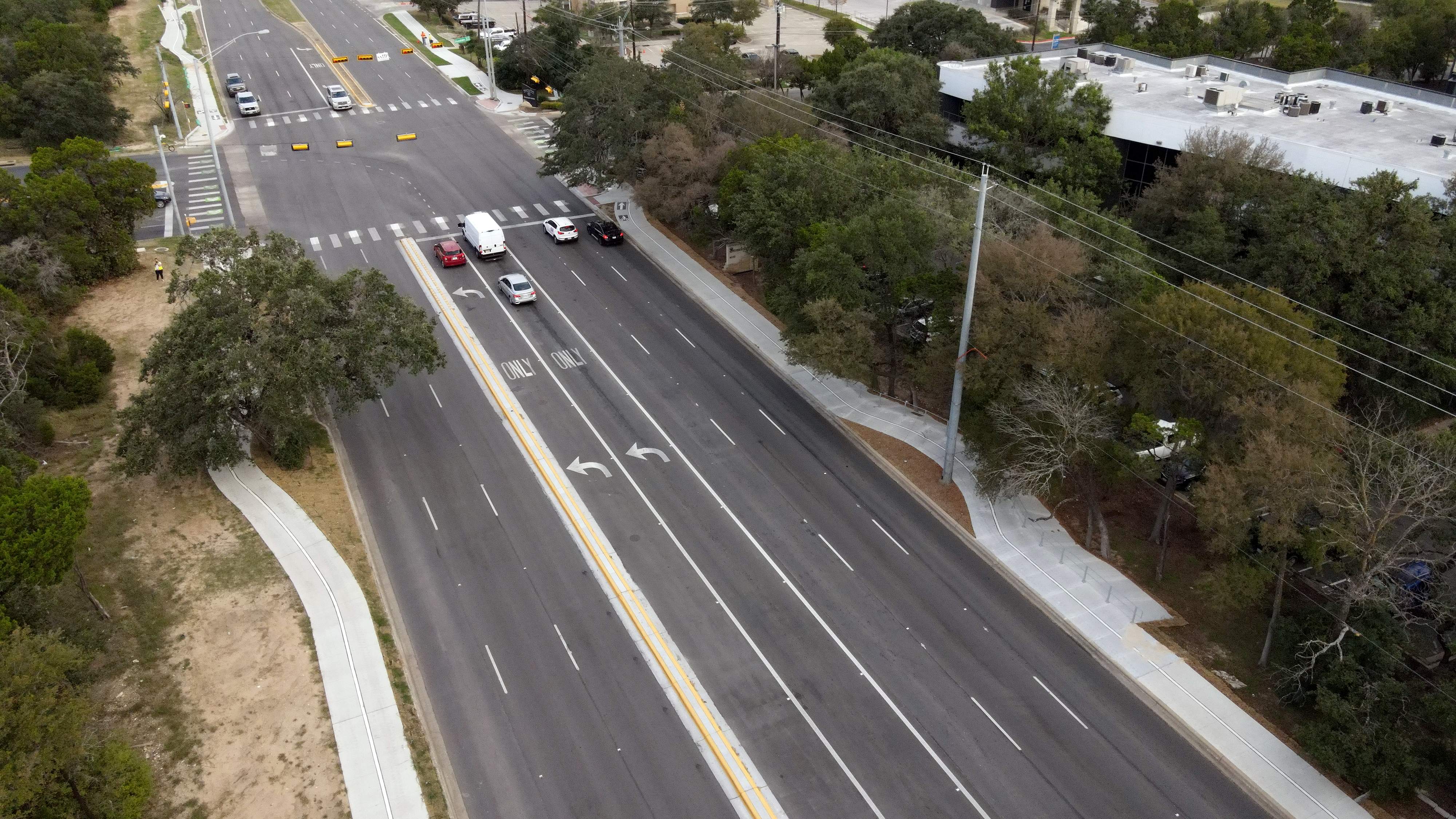 AUSTIN, Texas – Early results show some of the focused work the Austin Transportation Department (ATD)’s Vision Zero team has performed to make city streets safer is having a significant effect in reducing severe crashes, even amidst a local and nationwide trend of increasing traffic deaths. The new analysis on High-Injury Roadways (HIRs) and Leading Pedestrian Intervals (LPIs) is part of an ongoing series of reports called Vision Zero Analytics, which describe the findings in more detail.

“These are early results, but the data is promising,” said Assistant City Manager for Mobility Gina Fiandaca. “We will continue to evaluate the results to find the most effective and impactful ways to improve safety on our roads so everyone makes it home to their loved ones each day.”

Many of these improvements are possible because of voter support. The 2016 Mobility Bond provided $15 million for Vision Zero and intersection safety programs, while 2018's Proposition G provided an additional $15 million and the 2020 Safety and Active Transportation Bond provided $65 million.

“This evaluation shows that Austin’s Vision Zero initiatives are having a positive impact,” said Austin Transportation Director Robert Spillar. “Clearly, we have lots more to do to reach our Vision Zero goals. We will focus on scaling up this work to reach more areas of the city as part of our commitment to make Austin’s streets safer. We will also continue working with our partners like the Austin Police Department to implement our full toolbox of options to reduce fatalities and severe injury on our roadways.” 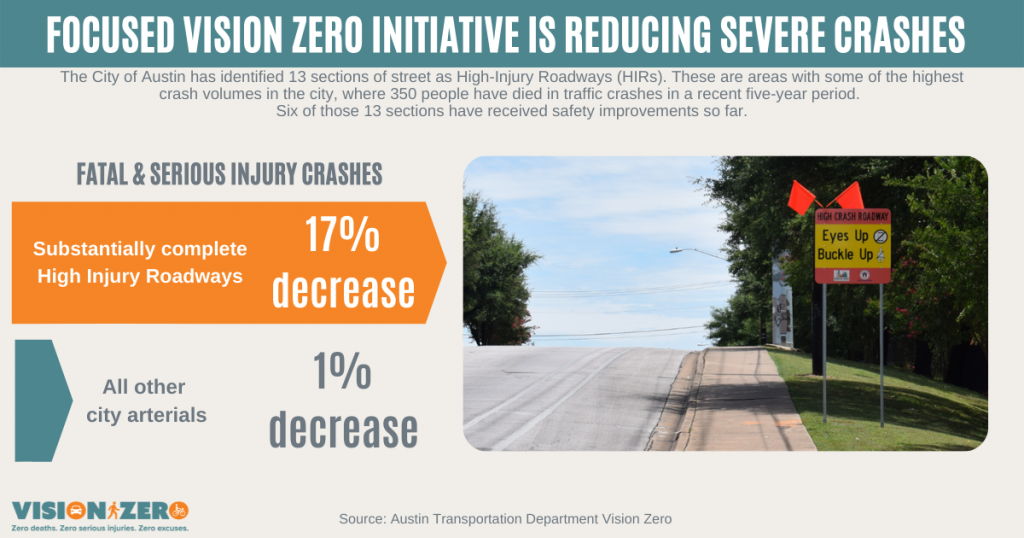 ATD has identified 13 sections of road in Austin containing the greatest concentration of crashes. On those streets, called High-Injury Roadways, more than 350 people were seriously injured or killed over a recent five-year period.

Safety improvements are substantially complete on six of those 13 HIRs. Improvements range from low-cost treatments such as more protected left turns for drivers or backplates for traffic signals to more substantial street design changes, such as the current project on South Pleasant Valley Road between Cesar Chavez Street and Elmont Drive consisting of new left-turn lanes, centerline hardening, pedestrian crossings and shared use pathways to address several crash types accounting for over $40 million in comprehensive crash costs between 2015-2019.

The improvements have shown positive results. Crashes resulting in deaths and serious injuries were down 17% on the six HIRs where work is considered substantially complete in 2021 through August compared to the 2017-19 average in the same eight-month time period. The 2017-19 average was used to analyze a time period before the pandemic changed traffic volumes citywide.

ATD then compared these six streets to all other arterial streets in Austin and found that crashes resulting in deaths and serious injuries were down just 1% on the control group through August 2021 compared to the 2017-19 average.

Click here to see a map of where the city has completed work on HIRs and where additional improvements are planned. 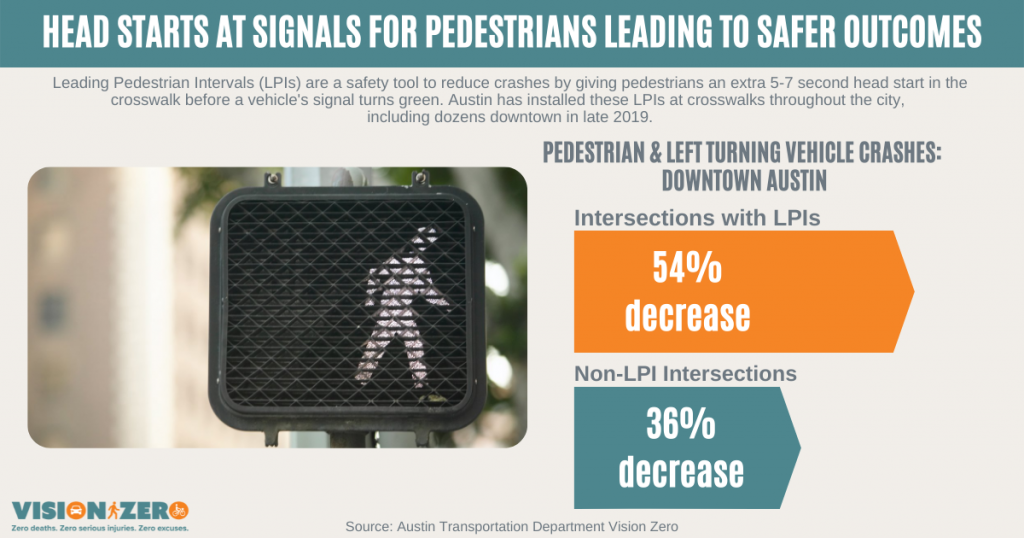 Citywide, there have been more than 100 fatalities on the roadways this year, up 30% from 2020. More than 1 out of 3 of the traffic-related fatalities on Austin roads in 2021 have been drivers hitting people who are walking or rolling—more than 35 people outside of vehicles have died in car crashes this year.

One strategy Austin is implementing to protect pedestrians is installing Leading Pedestrian Intervals (LPIs), which give pedestrians a 5- to 7-second head start in the crosswalk before vehicles receive a green light. ATD installed these at dozens of downtown crossings in late 2019 and has continued to expand use of LPIs throughout the city at more than 40 other locations.

At the downtown crossings, there was a 54% decrease in crashes involving a pedestrian and a left-turning driver following the installation of the LPIs compared with the previous three years. This is compared to a 36% decrease at downtown signals that did not receive LPIs over that same period.

Many of these improvements are possible because of voter support. The 2016 Mobility Bond provided $15 million for Vision Zero and intersection safety programs, while 2018's Proposition G provided an additional $15 million and the 2020 Safety and Active Transportation Bond provided $65 million.

The City of Austin Transportation Department works to provide a safe, efficient, innovative, cost-effective and sustainable transportation system that connects roadways, bikeways, walkways and transit systems in order to bring improved access and mobility to our community. We are taking proactive steps to engage and educate the community. Visit AustinTexas.gov/Transportation.