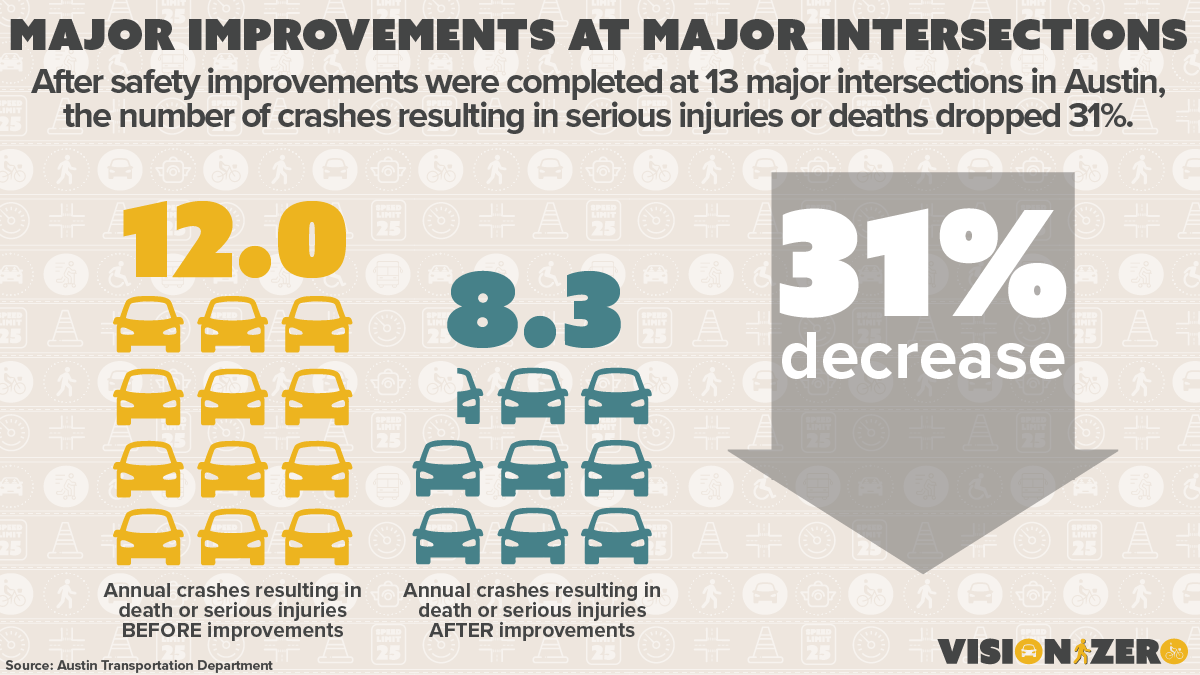 AUSTIN, Texas – Between 2017 and 2021, more than one-third of crashes that resulted in serious injury or death in Austin occurred at signalized intersections.

Through funding from the City budget and the 2016, 2018, and 2020 Mobility Bonds, Austin Transportation is working to improve safety at dozens of high-crash intersections as part of its Vision Zero goal of eliminating serious injuries and fatalities on Austin’s roadways. Since 2016, ATD has completed work at 19 major intersections.

Early data in a new Vision Zero Analytics report show promising results at completed intersections. Of the 13 intersections with at least one year of crash data following project completion, the annualized data showed a combined 30% reduction in total crashes and a 31% reduction in crashes resulting in serious injury or death.

At the 13 locations studied as part of the report, total crashes went from 326 per year before the work was performed to 229 crashes per year after completion. The serious injury or fatal crashes declined from an average of 12 per year to 8.3 per year. ATD also analyzed a control group of similar intersections across the city to better contextualize broader crash trends in Austin over the same period. At those locations, total crashes per year decreased by 4% and serious injury and fatal crashes increased by 8%.

The injury reductions come at a time when traffic fatalities are rapidly rising across the country. The reductions at these locations, however, provide evidence to support an idea at the heart of Austin’s Vision Zero strategy: that changing the design of our streets is the most effective strategy to reduce severe crashes over time.

These crash reductions have additional benefits beyond fewer people suffering life-changing or life-ending injuries in crashes: there is reduced traffic congestion for all roadway users caused by these crashes, and fewer public safety resources are needed to respond to crashes.

Undoing more than 80 years of vehicle-centric street design in a city of approximately 300 square miles will take time, but the work continues as every avoided traffic fatality or serious injury is worth the effort.

ATD teams finished upgrades to another major intersection at Cameron Road and Ferguson Lane in May, and four more projects are scheduled to start construction before the end of 2022. You can learn more about completed and planned work at the Transportation Safety Improvement Program web page. 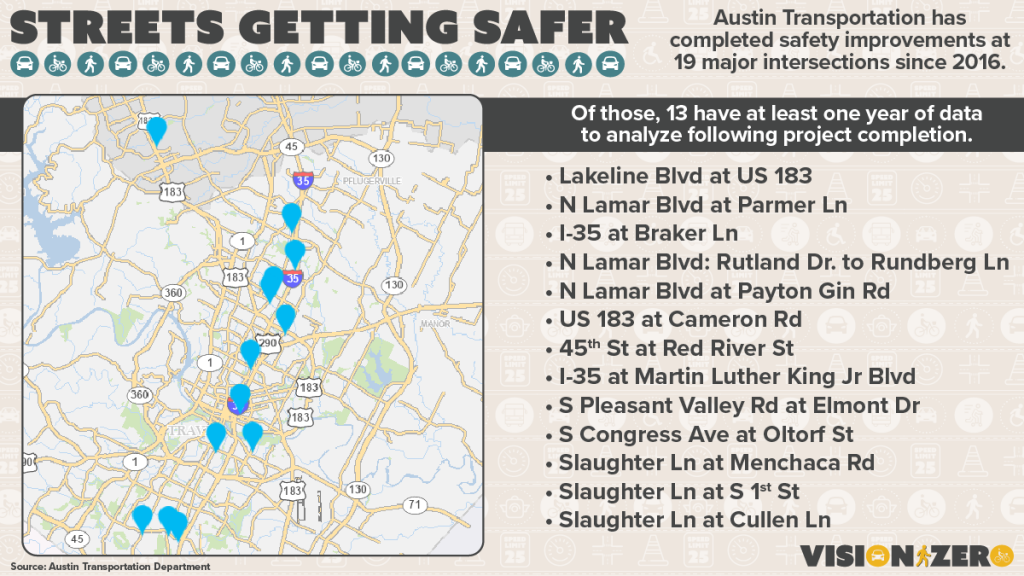 The City of Austin Transportation Department works to provide a safe, efficient, innovative, cost-effective and sustainable transportation system that connects roadways, bikeways, walkways and transit systems in order to bring improved access and mobility to our community. We are taking proactive steps to engage and educate the community. Visit AustinTexas.gov/Transportation.