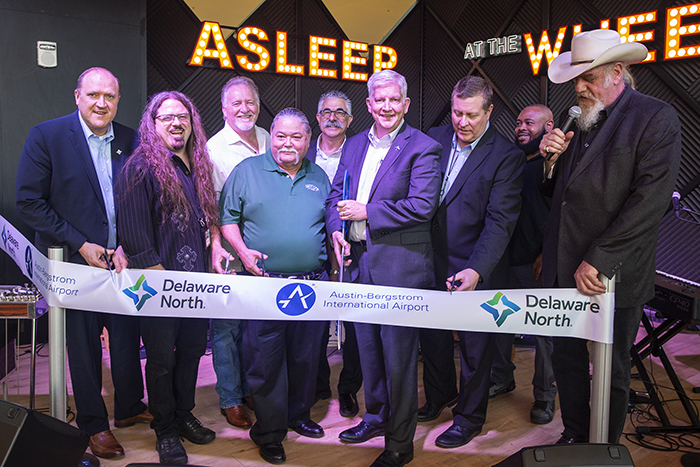 AUSTIN, Texas – The Heart of Austin, Saxon Pub – Asleep at the Wheel Stage located in the center of the Barbara Jordan Terminal at the Austin-Bergstrom International Airport celebrated with a star-studded line up of performances, a ribbon cutting and grand opening speeches, on Friday, April 19.

Delaware North hosted the grand opening program that included a ribbon cutting ceremony and performances by Ray Benson, Heybale Band, and Love & Chaos. Also in attendance was legendary Texas Longhorn All-American, Heisman Trophy Winner, Earl Campbell, an NFL Hall of Famer who played with the Houston Oilers and New Orleans Saints. The program celebrated the opening of the Heart of Austin area that includes the Saxon Pub – Asleep at the Wheel Stage, the Saxon Pub Bar, Jo’s Coffee, and the Earl Campbell Food Truck. 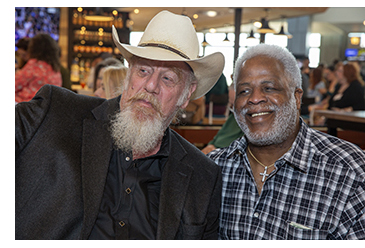 “Can’t wait for everyone to see the new ‘Asleep at the Wheel’ stage and Saxon Pub in ABIA!” said Ray Benson, legendary songwriter, musical performer and voice actor. “From the beginning, it was extremely important to me to have music in our airport. We have continued to grow and make the music experience for all travelers, from all over the world and for us Austinites to have a top-notch experience. I think everyone will be thrilled with the new layout!”

Located near Gate 19, the 4,456 square feet Heart of Austin has a 9-foot neon lighted guitar spinning above the area and seating for 190 patrons. The live music performance stage is 317 square feet with state of the art sound system and equipment for musical and acoustic shows. The area includes bar and stadium seating, creating a comfortable backyard porch and patio vibe, along with the 876 square foot Saxon Pub bar.

“The new Saxon Pub at ABIA is absolutely beautiful and quite a treat for travelers in and out of Austin. Sharing this incredible space with Ray Benson’s Asleep at the Wheel stage and the Earl Campbell branded taco truck is quite an honor. Delaware North should be commended for their amazing commitment to supporting live music in Austin,” said Saxon Pub owner Joe Ables.

“Live music is in Austin’s roots and culture, we work hard to make it part of the Austin passenger experience. I believe that we have one of the best airport music programs in the world and have now taken it to the next level,” said Austin airport music coordinator, Michael Pennock.