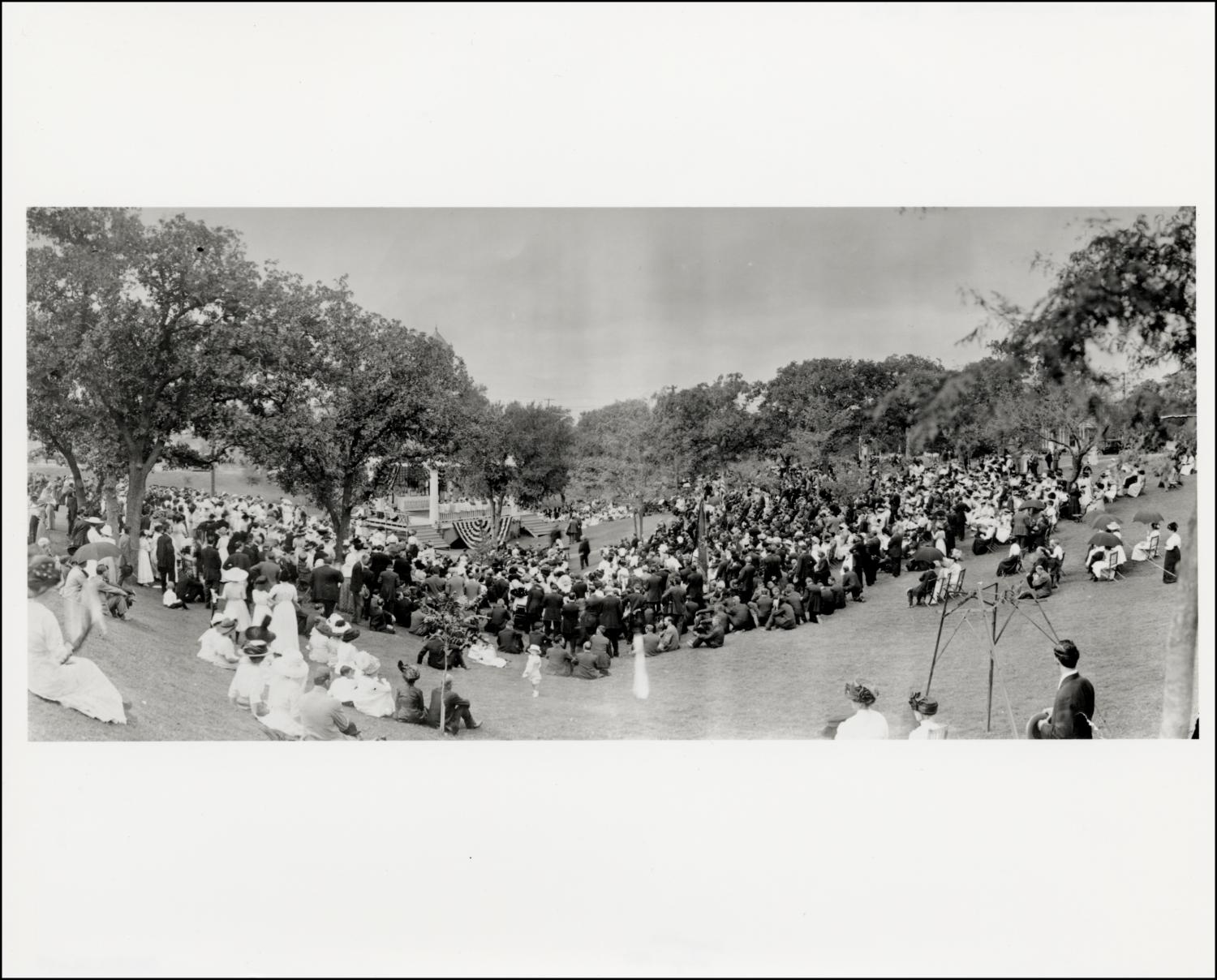 The National Votes for Women Trail (NVWT) is a major effort to document the significant sites of the women’s suffrage movement across the United States commemorating the fight for voting rights for women. NVWT is installing up to 250 roadside markers across the country to share the little-known stories of the struggle for equality, culminating in the passage of the 19th amendment allowing women the right to vote. The NVWT is a project of the National Collaborative for Women’s History Sites in partnership with the William G. Pomeroy Foundation, which funded the National Votes for Women Trail Marker Program.

The dedication will also include a marker celebrating Wooldridge Square’s designation as a Texas Recreation and Park Society (TRAPS) Lone Star Legacy Park, which is a park that holds special prominence in the local community and the state of Texas. To qualify for consideration, the park must have endured the test of time and become iconic to those who have visited, played, and rested on its grounds. Nominated parks must be a minimum of 50 years old and meet criteria related to historic, architectural, and natural significance.

When Judge Edwin Waller platted the City of Austin in 1839, he designated four public squares in each quadrant of the city. Only three of the original squares remain and Wooldridge Square, in the northwest quadrant of downtown, is relatively unchanged and retains a high degree of historic integrity. For its first sixty years, Wooldridge Square was used by the public but remained municipally undeveloped.

By 1907, improvements were made to the park, and in 1909, Austin Mayor A. P. Wooldridge, for whom the square was already named, sponsored the construction of a classical revival-style gazebo for public engagements in the park. In the early 20th century, many women's suffrage rallies leading to Texas ratifying the 19th Amendment to the U.S. Constitution were held at Woolridge Park.

Texas Equal Suffrage Association (TESA), the state chapter of the National American Woman Suffrage Association (NAWSA), documented 98 suffrage organizations in 1918. TESA and its members were instrumental in Texas becoming the ninth state to ratify the U.S. Constitution 19th Amendment, which maintains that the right to vote shall not be denied by any state on account of sex. Local groups, such as the Austin Woman Suffrage Association, formed in 1908 as a chapter under the TESA, and the Austin Chapter of the National Woman’s Party (NWP) formed in 1916 by Austinite Clara Snell Wolfe.

Minnie Fisher Cunningham, of New Waverly and Galveston, Texas was elected president of TESA in 1915 and served in this position until the suffrage victory in 1919. Activists also held a rally at the park to support “The Melting Pot Movement,” which encouraged women to donate funds to the efforts being waged in other states that had women’s suffrage on the ballot in 1914. Cunningham also held a rally at Woolridge Park in 1928 when she became the first woman from Texas to run for the U.S. Senate.

Wooldridge Square’s significance reaches beyond Austin and is closely tied to significant statewide and national events. In 1948, Lyndon Baines Johnson, who would later serve as the 36th U.S. President, launched his U.S. senatorial campaign at a rally at Wooldridge Square.

About Texas Recreation & Park Society
The Texas Recreation & Park Society is a nonprofit dedicated to advancing the parks, recreation and leisure industry through connection, advocacy, resources and education. The Society serves as a clearinghouse of information and resources to help with a wide range of challenges facing park, recreation, and leisure service professionals. Find out more at traps.org.

About NCWHS
The National Collaborative for Women’s History Sites is a non-profit organization established to support and promote the preservation and interpretation of sites and locales that bear witness to women’s participation in American history. NCWHS is dedicated to making women’s contributions to history visible so all women’s experiences and potential are fully valued. For more information visit ncwhs.org.

About the Pomeroy Foundation
The William G. Pomeroy Foundation is a private, grant-making foundation established in 2005. The Foundation is committed to supporting the celebration and preservation of community history; and to raising awareness, supporting research and improving the quality of care for patients and their families who are facing a blood cancer diagnosis. To date, the Foundation has awarded over 1,100 roadside markers and plaques nationwide. Learn more at wgpfoundation.org.