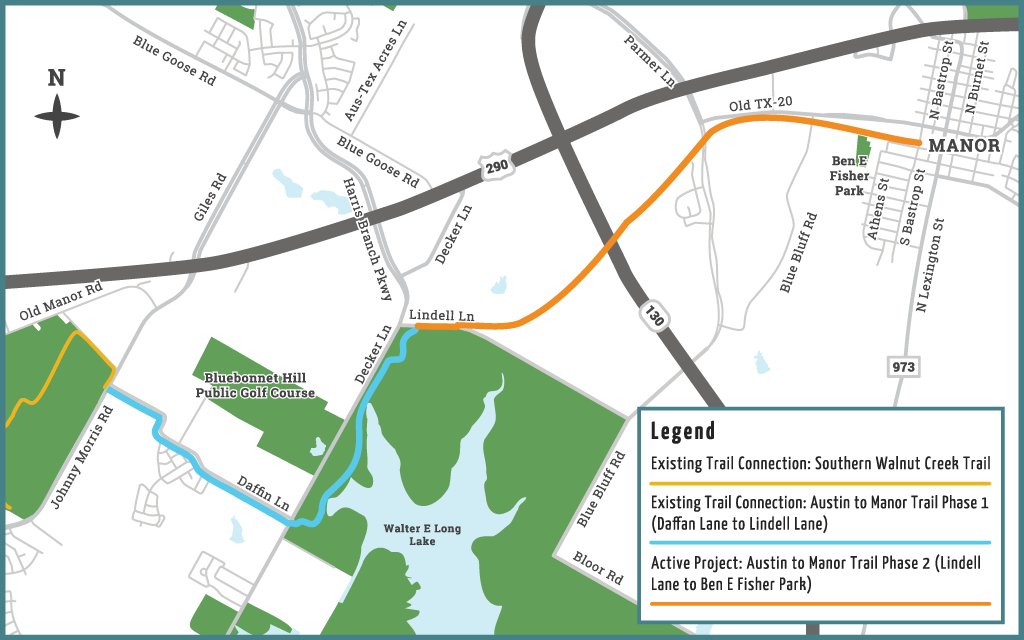 The Urban Trails program is working to connect Austin’s trails network to the city of Manor, located east of Austin. Recommended in the City’s 2014 Urban Trails Plan, the Austin to Manor Trail will create an additional route for commuters between both cities.

This section of the trail is complete and opened to the public in Fall of 2014. It connects from Daffan Lane and the Southern Walnut Creek Trail to Lindell Lane. This section is 2.5 miles long and a ten-foot wide concrete path.

This section of the Austin to Manor Trail is being developed through the Local Mobility Program of the 2016 Mobility Bond. The Mobility Bond was approved by voters in November 2016. It dedicates $26 million for urban trails with a transportation and mobility purpose.

This project will connect to the existing section of the Austin to Manor trail to create a complete connection from Manor, Texas to Austin. Austin to Manor connects to Austin’s larger trail network and increases trails access to southeast Austin. This section will be 2.9 miles long and will include a 12-foot wide concrete path.

The Urban Trails Program released a Preliminary Engineering Report in 2013. This report shows the recommended route for this trail. It also lists topics the City needs to consider to build this trail, such as environmental concerns, wildlife, nearby property ownership, and more. See the Austin to Manor Trail (Lindell Lane to Ben E Fisher Park) preliminary engineering report here.

The project is now in the design phase with design expected to be complete by Fall of 2021 and construction to be completed in Summer of 2023.

Sign up for email updates on Austin to Manor Trail and other Urban Trails projects here!