History of the Southcentral Waterfront

History of the South Central Waterfront

For the first 120 years since Austin was founded the area now known as the South Central Waterfront (SCW) was river bottom and floor plains. With the creation of Town Lake (now Lady Bird Lake) in 1960 the SCW finally had a stable bank and became developable. But unlike the downtown which had a grid of streets and blocks from the beginning, the SCW had no physical framework to orchestrate orderly development.

A view from the south side of the river, looking north in the early 1900's. Photo courtesy, Austin History Center.

Since its creation of the lake in 1960 the Lady Bird Lake corridor is one of Austin’s most distinctive and valuable natural assets, as well as one of Austin’s most beloved places. Formerly known as Town Lake, the lake was renamed in 2007 to honor long-time Austin resident Lady Bird Johnson (wife of President Lyndon B. Johnson) and her contributions to spearheading the Town Lake Beautification Project in 1970’s.

Further planning studies for the waterfront that date back 30 years have consistently called for harmonious development which respects the tremendous asset of the lake and shoreline. Planning studies specifically for the vicinity of the South Central Waterfront over the past 15 years have consistently noted that a lack of a good network of streets and blocks is a prime obstacle to harmonious development. Some of those key studies for the waterfront in general and for the South Central Waterfront vicinity in particular are shown below.

Portions of this report have been integrated into the adopted South Central Waterfront Vision Framework Plan. Click here to view the EPA report. 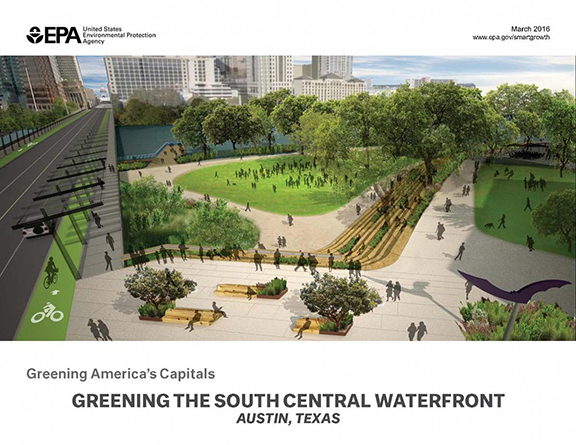 2014
The Interim Draft Vision Framework Report, August, 2014, was created in response to the City Council directive to report the results of initial community engagement for the South Central Waterfront (SCW) Initiative. This Report incorporates best practices and previous studies for the SCW, and represents an early, interim stage in achieving a fully realized SCW Small Area Plan.
The draft Vision Framework identifies three key requirements in order to realize community aspirations for the SCW:

The Sustainable Places Project was a region-wide effort to help Central Texas communities align their planning and investment choices with their community values to create healthy and sustainable activity centers. As part of this federally-funded grant, the Sustainable Place Project (SPP) utilized a computer-based analytic tool to assess and compare the financial, environmental and social impacts of three potential redevelopment scenarios for the South Shore Central (87 acres within the South Central Waterfront). The SPP analysis modeled: Scenario 1 following the current economic treads and existing regulations; Scenario 2 based on a version of the Report from the AIA Sustainable Design Assessment Team (SDAT); and Scenario 3 from the University of Texas School of Architecture/Texas Futures Lab. View the 2013 SPP Scenario Planning Report.

2012
The Council appointed Waterfront Planning Advisory Board (WPAB) for engagement with Austin’s citizens in city-wide public workshops. For the past two years the WPAB has supported two key planning initiatives for the South Central waterfront area:

Each of these initiatives provided opportunity for public input, analysis, and preliminary recommendations on how to best achieve the principles of the 1985 Town Lake Corridor Study.

In 2012, Austin was one of seven communities nationwide to win a grant for technical and design assistance from the AIA/SDAT public service program. As part of the SDAT program, Austin hosted a team of national sustainable design experts who worked with more than 200 citizens, City staff and officials, and other stakeholders. The City of Austin received the final October 2012 AIA Sustainable Design Assessment Team (SDAT) report.

1986
The 1986 Waterfront Overlay Combining District Ordinance, remains in effect today, much as it was when first enacted. The Ordinance was established to protect and enhance the waterfront while providing a framework for future development. The Ordinance established 15 sub-districts (now 16) along the 5.4-mile Town Lake Corridor.

1985
Forward-looking waterfront planning has been rooted in the 1985 Town Lake Corridor Study. This study, conducted in 1985, established broad principles and goals to promote that future public and private development along and near the lake be in harmony with protecting the waterfront, enhance public access along and to the shoreline, and encourage excellence in urban design.

The Town Lake Corridor Study called for developing long-range comprehensive plans to address both the water’s edge and urban edge. To date, this has not been accomplished for several key locations. The study also led to the creation of the 1986 Waterfront Overlay Combining District Ordinance.