Improvements are underway at the Airport 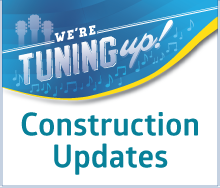 The former Learning and Resource Center building, located at 2800 Spirit of Texas Drive is currently under construction to be converted into the new Airport Career and Development Center. The Airport Career and Development Center will consolidate job openings at the airport, centralize the application process and host employee training. The center’s function is to support jobs at the airport including positions in the Department of Aviation, airlines, concessionaires and other aviation job support services and providers.

The 21,300 square foot steel frame building will also have offices for the employment and talent acquisition staff, a records room, interview rooms, conference and meeting rooms, a job board, testing center, and application stations.

The building makeover for the new Airport Career and Development Center, estimated to be completed in fall 2019, will feature more open spaces, bigger windows, a patio area, new trellis, canopies and sunshade fins, and a reception desk.

To accommodate and continue the support of the Department of Aviation’s connectivity and technology development, the Austin airport is expanding and renovating the existing Information Technology building on campus.

The existing single-story 10,000 square foot IT building was built in 1952. With the demand and growth for Data Center need, IT lab and staff meeting space, communication operations and more office and network equipment space, the new two-story facility will triple the size of the existing IT building. The new building, with 40,124 square feet of total space to be renovated and constructed, is designed to meet the physical security protection requirements to safeguard equipment from non-natural and weather hazards.

Construction is estimated to begin in fall of 2019 and be completed by the end of 2020 and is aimed for LEED Silver certification from the United States Green Building Council.

Located on 29.88 acres on current airport property, the single complex design supports the need for additional maintenance facilities that are currently located at various locations at the Austin airport. It will also provide covered storage of maintenance vehicles and other important and expensive assets.

Construction on the consolidated maintenance complex buildings totaling 133,150 square feet is estimated to begin in 2019 with an estimated completion date in 2020. 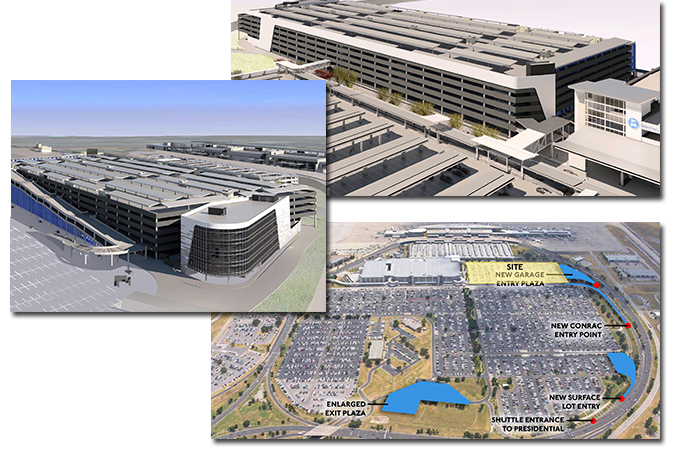 A new six level parking garage is in construction at Austin-Bergstrom International Airport. The garage will provide 6,000 covered parking spaces within walking distance of the Barbara Jordan Terminal. It is located at the site that previously was Lot A. Lot A is now closed for the construction of the parking garage.

The project, funded at $250 million, includes improvements in addition to the garage. The overall project includes:

The project was approved by the Austin City Council on March 23, 2017. City Council approved PGAL as the project architect. Austin Commercial was approved as the contractor. The garage is scheduled to be completed in 2018 and the administrative building in 2019.

The former Lot A location accommodated 1,021 parking spaces. The new garage with 6,000 significantly increases parking capacity in that area. Currently, ABIA Parking offers 4,088 garage parking spaces available with 7,268 economy spaces in surface open lots B-G. There are 850 spaces available for overflow at the economy rate that opens when all lots are full.

ABIA Parking is managed by SP Plus Corp and offers several convenient parking options including Family Friendly Valet and Executive Valet services. There is also a Complimentary Cell Phone Lot to wait for arriving passenger pickups. More airport parking information can be found at www.abiaparking.com and passengers can follow on Twitter for parking updates @ABIA_Parking. 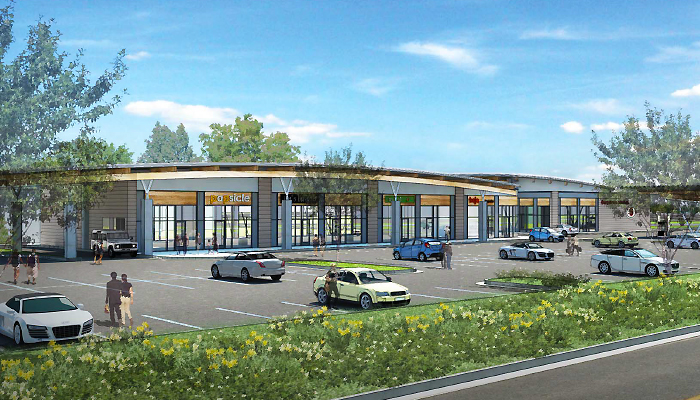 A ground breaking ceremony for a new ABIA Retail Center and cell phone parking lot at Austin-Bergstrom International Airport was held on Aug. 5, 2016. Construction on the 9,750 square foot retail/restaurant building and 4,500 square foot convenience store, with 10 gas pumps, is expected to be completed in 2017. The development plans to include a playground, public restrooms, Austin Energy electric vehicle fast charging stations and additional free cell phone parking spaces for those waiting to pick up passengers.

The Retail Center will be located in close proximity to the airport’s Barbara Jordan Terminal and adjacent to the Hyatt Place Austin Airport hotel. The development is situated along the airport’s main roadway, Presidential Boulevard. This access point will be highly visible and very convenient for airport users and nearby residents.

The Retail Center is a public/private development with the City of Austin Department of Aviation and is being developed and managed by ABIA Retail, LLC on leased airport land. Austin Commercial, L.P. is the general contractor on the project. 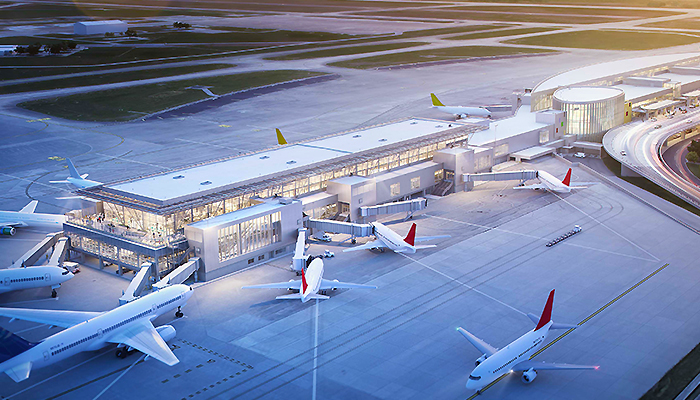 Austin-Bergstrom International Airport is undergoing a terminal expansion project to add nine more gates to keep pace with increasing passenger traffic and to prepare for the future growth of air service to the rapidly growing area.

The Austin City Council in October 2015 authorized the Aviation Department, to contract with Gensler (designer) for up to $36 million and Hensel-Phelps (builder) for up to $289 million, to complete the additional gates to the east end of the current terminal. The total project funding is $350 million which includes the architectural and engineering fees, furniture and equipment, testing and inspections and other project cost. The expansion, starting near Gate 2, will increase the number of contact gates with boarding bridges at ABIA from 24 to 33 and is anticipated to be completed in 2019.

Additionally, the expansion will provide an additional 48 acres of space for more aircraft to the existing terminal facility and supports the recommendations made in the 2003 and 2008 Master Plan Phasing Projects.

Due to the expansion of the existing terminal facility and the increase in aircraft size, the existing apron pavements need to be expanded.  The apron expansion is separated into three phases of work with targeted completion dates.

Additional water quality pond infrastructure will also be required to adequately treat storm water runoff due to the added impervious cover from the apron expansion.

The four-story, 139-room Hyatt Place Austin Airport hotel was completed on May 31, 2017. The 77,000 square foot hotel was built between undeveloped land located adjacent to retail development at the Austin-Bergstrom International Airport, off Presidential Boulevard, the main airport roadway.

Bark&Zoom, a 13,000 square feet covered valet parking and pet hotel complex at the Austin-Bergstrom International Airport opened on May 14, 2017. The development located at 2601 Cardinal Loop, north of the airport’s main entry is open 24-hours with 153 parking spots for Austin airport travelers.

Veterinarian services for dogs and cats are available. Along with a guitar shaped doggie pool, the pet hotel offers a suite service that includes webcam and streaming television services. Passengers park at the facility, drop off their pets and are transported to the Barbara Jordan Terminal.

Developed by local Austin business Scott Airport Parking, Park&Zoom offers convenient transportation to the terminal, EV charging stations, bicycle racks and showers for cyclists, and a mix of electric and low-emission diesel shuttles that provide travelers with rides to the terminal.

The 1.6 million square foot complex hosted a grand opening ceremony in October of 2015 to showcase the consolidation of all rental car operations.

See a time lapse video of construction here https://vimeo.com/143430558 and you can  Click here to visit the Flickr gallery, or view the photo album on http://on.fb.me/1SdbfOM

The Terminal East Infill Project was completed in July 2015 with the opening of a new six lane passenger security checkpoint. This created a new connection from the east ticket lobby to the concourse at approximately Gate 5. In December 2014, the lower level of the project was completed. This provided a new Customs facility that is larger and more efficient. With the new Customs facility, the processing of international arrivals has increased from 200 passengers per hour to 400 per hour. Further, it has the capability of processing up to 600 passengers per hour. The Terminal East Infill Project added approximately 56,700 square feet to the terminal and renovated approximately 17,000 square feet of the existing terminal. This included adding two luggage carousels to bag claim. The completion of the project comes in a very timely fashion as Austin-Bergstrom International Airport is experiencing record passenger growth. A record 10.7 million passengers traveled through the airport in 2014 and 2015 passengers are on pace to exceed the previous year. The project was budgeted at $62 million. Construction of the Terminal East Infill was performed by the design-build team of Hensel Phelps (construction) and Austin design firm PageSoutherlandPage. In addition to function, the new terminal addition incorporates colorful and cultural expressions into the architecture. Learn more here.

Another full-length taxiway is now operational at Austin-Bergstrom International Airport. The year-long project to extend the north and south ends of Taxiway A was completed on July 9, 2015. This completes the taxiway to its full length, providing multiple access points to the airport’s east runway and allowing air traffic control more options in handling high density traffic.

Taxiway A is parallel to one of the two runways at ABIA. It has been constructed in phases, with prior expansion taking place in 2002. To complete the south and north portions, outlined in red in the aerial photo, a 75-foot wide concrete taxiway pavement was laid, along with a 30-foot wide pavement shoulder, as well as other additions including taxiway lights and guidance signs.

The Taxiway A Completion project was funded at about $9 million, which includes design, construction, testing, inspections, etc… The Federal Aviation Administration (FAA) will fund 75% of the project up to $7.2 million, with the airport responsible for the remainder.