There has been a lot of discussion about transition areas and transition zones. Here’s what you need to know:

Conceptually, think of transition areas as the space (not necessarily empty) between areas with single-family homes and areas with commercial buildings. In transition areas, the size and height of buildings generally get smaller as you move (or transition) away from commercial areas into neighborhood residential areas. Transition zones are the zoning categories assigned to parcels or lots in a transition area.

Why are transition areas important?

Transition areas can help address housing supply and manage traffic congestion as the City grows. They can provide diverse housing choices to serve more people in a wider range of income brackets. Transition areas are strategically located within an approximate five-minute walking distance to commercial goods and services, as well as major multimodal roadways (aka corridors).

Where are transition areas and zones going to be?

Transition areas and zones are being developed with the current Land Development Code Revision. Their location and regulations are guided by City Council’s May 2, 2019 policy direction. Applying Council’s direction, transition areas are expected to make up approximately 2% of the City’s land area.

Depending on how many of the criteria are met, staff is applying transition zoning regulations to properties using the 2-5 lots range as a guide.

How are transition areas being mapped?

Like a lot of cities, many parts of Austin do not have consistent lot sizes or are not designed in perfect grid systems. Therefore, strictly following the 2-5 lots criteria provided by Council in areas with inconsistent lot configurations can be challenging. In order to offer consistency in the size of a transition area near a corridor, staff used distance measurements to apply transitions as evenly as possible. But these measurements will vary from corridor to corridor. In some instances, especially where lot sizes are not consistent, the transition area may also exceed 5 lots. A full explanation and discussion of the approach to transition areas was presented to City Council on August 28, 2019. If you would like to discuss transition areas in more detail and/or have a question about your property you can also schedule one-on-one time to speak with staff by signing up for Office Hours (available after October 4).

I live in a transition area. How does this affect me?

Over time, you may have more neighbors as people are accommodated by additional housing stock.

Owners of single-family homes in the transition areas will be able to choose to maintain, rebuild or remodel their single-family home. If they instead choose to build one or more additional housing units on their property, they could not go back to a single housing unit. Property owners will have full rights to make whatever decision is best for them.

What about areas experiencing gentrification and displacement?

Anything else I need to know?

Consistent with City Council’s May 2, 2019 policy direction, staff aimed to reduce the depth and scale of the transition areas so that the transition zone(s) do not overlap with the majority of an existing single-family neighborhood area. Additionally, new transition zones and areas will not be applied to environmentally sensitive areas, such as properties within the floodplain defined by estimated Atlas 14 data.

We wanted to provide further clarification to how staff is defining a ‘lot’. Lots can vary greatly in size and shape but are generally individual pieces of land defined by property lines. This is not to be confused with blocks which are defined groups of contiguous lots and bounded by streets (see diagram below). How transition zoning was applied to lots within transition areas is described in the blog post above. 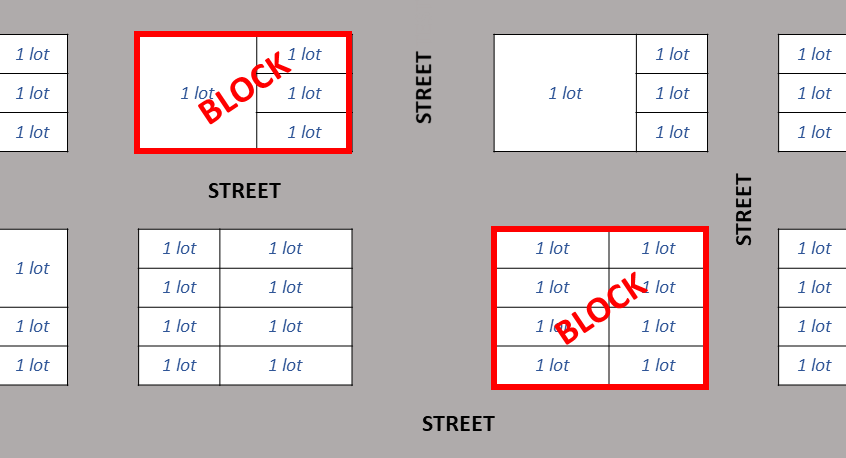