Did you know trees communicate with each other through a network like our World Wide Web? Tree roots live underground, but they are not alone. They are part of a vibrant ecosystem. There are more bacteria in a teaspoon of soil than people on the planet. Of course, soil also contains large organisms like insects, worms, moles, and spiders, but the microsphere is often overlooked for its importance to tree health. Other tiny inhabitants include fungi, algae, and protozoa. Soil inhabitants create pathways through the soil for air and water to soak in and become available to roots. The soil ecosystem helps break down organic material into its basic elements. These become the nutrients that the tree uses to produce its food. 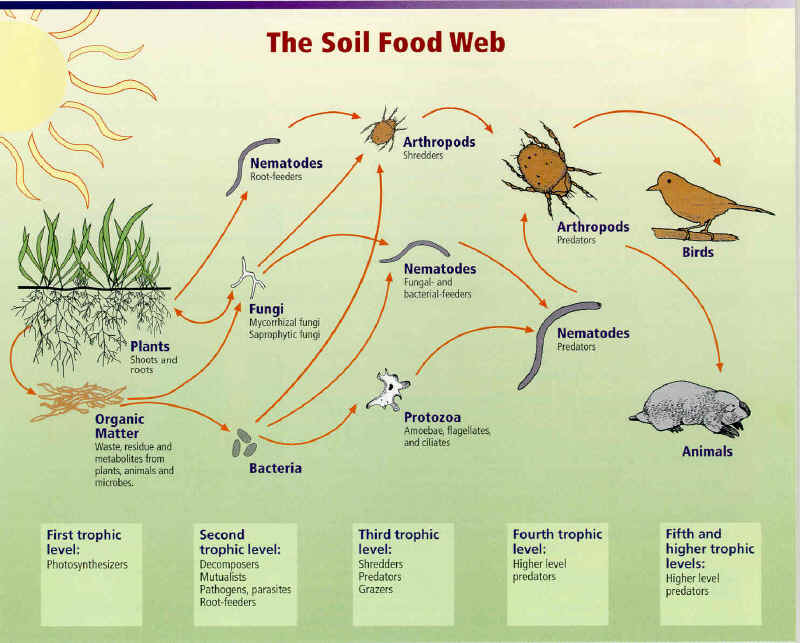 Among the inhabitants of soil are a special class of fungi called mycorrhizae. These fungi colonize the tips of fine, feeder roots and extend out into the soil. The fungus gets some protection and help from the tree, but provides a much greater service by helping to absorb nutrients and bring them into the tree’s cells. They also help the tree defend against other fungi that might colonize the roots and cause damage. There is even evidence that, when one tree is attacked by a disease or pest, the defensive signals are transmitted through mycorrhizae to other trees, which then begin producing defensive compounds before the attack arrives (http://www.bbc.com/earth/story/20141111-plants-have-a-hidden-internet). So, even though we typically preserve a “critical” root zone based on the tree’s diameter, there is actually often one continuous network of trees, roots, and fungi. It’s important to bear this in mind, particularly in suburban and urban areas where what we do to our soil might affect several of our neighbors.

Image 2) Brown tree roots living together with the white mycorrizal fungi. In nature, these fungi would spread outward and join up with other roots on other trees. Image courtesy New York Botanical Garden.