Influenza, known as "the flu," is a contagious respiratory illness caused by a virus. Most people will have mild illness, but some cases can result in hospitalization or even death.

The Centers for Disease Control and Prevention recommends that anyone six months of age and older should be vaccinated for the flu every flu season. High-risk individuals include:

Flu shots are available at Shots for Tots/Big Shots clinics for uninsured children and adults. The shot costs $25 for adults, $10 for children, and free for children with Medicaid. For an appointment, call 512-972-5520.

For those who are insured, visit VaccineFinder.org to find a location with flu shots near you.

In addition to the flu vaccine, there are preventative measures people can take to prevent the flu:

You many be contagious from one day before and up to seven days after becoming sick. Influenza may present the following symptoms:

If you contact your doctor within 48 hours of symptom onset, you may be able to take an antiviral drug, which will reduce the severity of symptoms and length of the illness.

The official flu season began on September 29, 2019. The information below contains data through January 11, 2020: 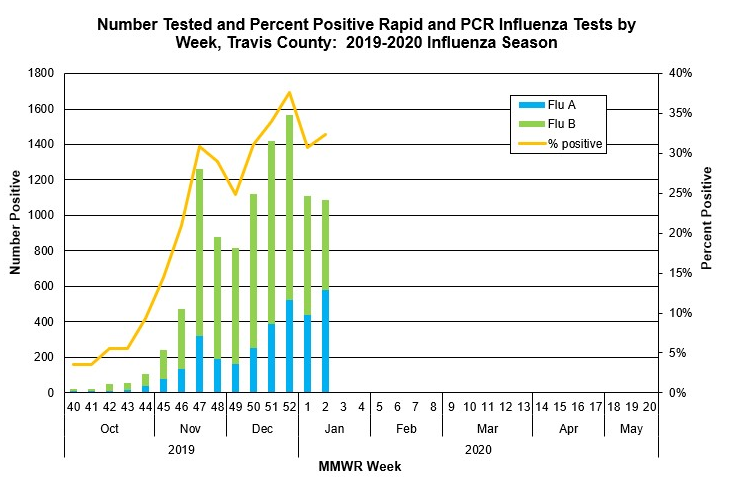 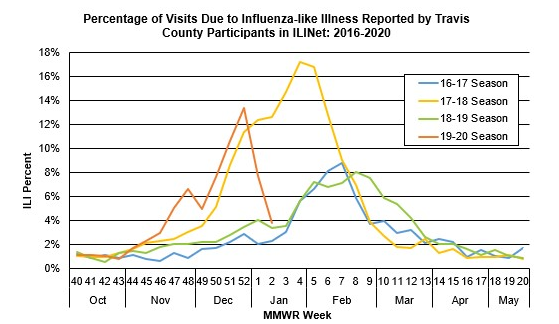 Austin/Travis County influenza surveillance does not capture all cases of influenza or influenza-like illness. The reporting of seasonal influenza is voluntary. This data should be used for trending purposes over time and for identifying types/strains of influenza that are occurring in the Austin area rather than for estimating the total number of cases.

For more information about flu at the state level, visit the Texas Department of State Health Services.

For more information about flu at the national level, visit the Centers for Disease Control and Prevention.

To find out where you can get a flu shot in Austin, click on the link above.