The City of Austin amended its Code to ban the use and sale of pavement sealants with more than .1% (1000 ppm) PAH by weight within the City’s planning jurisdiction (full purpose city limits and ETJ). The one exception is that the sealant may be sold if the intended application area is outside the City’s ETJ. The Austin ban was effective January 1, 2006 and was amended October 17, 2019 to expand the prohibition from coal tar to high Polycyclic Aromatic Hydrocarbons (PAH) sealants.

PAH’s are a group of chemicals formed during the incomplete burning of coal, gasoline, wood, garbage or other organic substances such as tobacco, charcoal broiled meat, and incense. As a pollutant, they are of concern because some compounds have been identified as cancer-causing. For example, one PAH compound, benzo[a]pyrene, is notable for being one of the first chemical carcinogens discovered; one of many found in cigarette smoke. PAHs are lipophilic (mix more easily with oil than water). The larger compounds are less water-soluble and less volatile (less prone to evaporate). Therefore, PAHs in the environment are found primarily in soil, sediment and oil substances, as opposed to water or air. However, they can be found in particulate matter suspended in air.

Basis for the Ban

Concentrations of PAHs in Austin’s waterways

During our annual surveys of stream sediment chemistry, concentrations of Total PAHs (the sum of 16 compounds) generally range from <1mg/kg to over 200 over the past 15 years (Fig. 1). A screening value of 23 mg/kg is used as a threshold, above which, aquatic life use is expected to be negatively effected (Probably Effects Concentration, or PEC), and most of our data falls below this value. However there are a number of locations that have exceeded this value one or more times, and we are looking at these sites carefully for temporal trends and potential best practices that will address the source of PAHs to these sites. 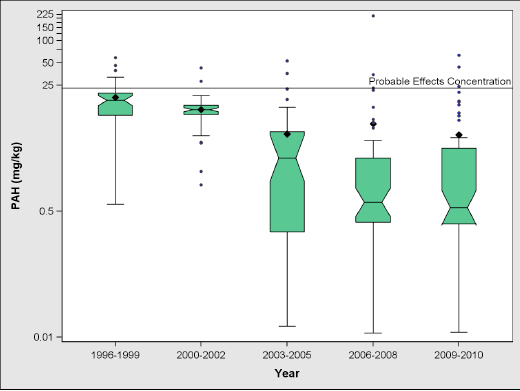 Effectiveness - Is the City of Austin Ban helping to reduce the PAHs found in area waterways?

By removing this potent source of PAHs to our environment, we are reducing PAHs in our streams. A United States Geological Survey (USGS) study conducted in 2014 showed a 58% reduction in PAH’s in lake sediment from Lady Bird Lake. 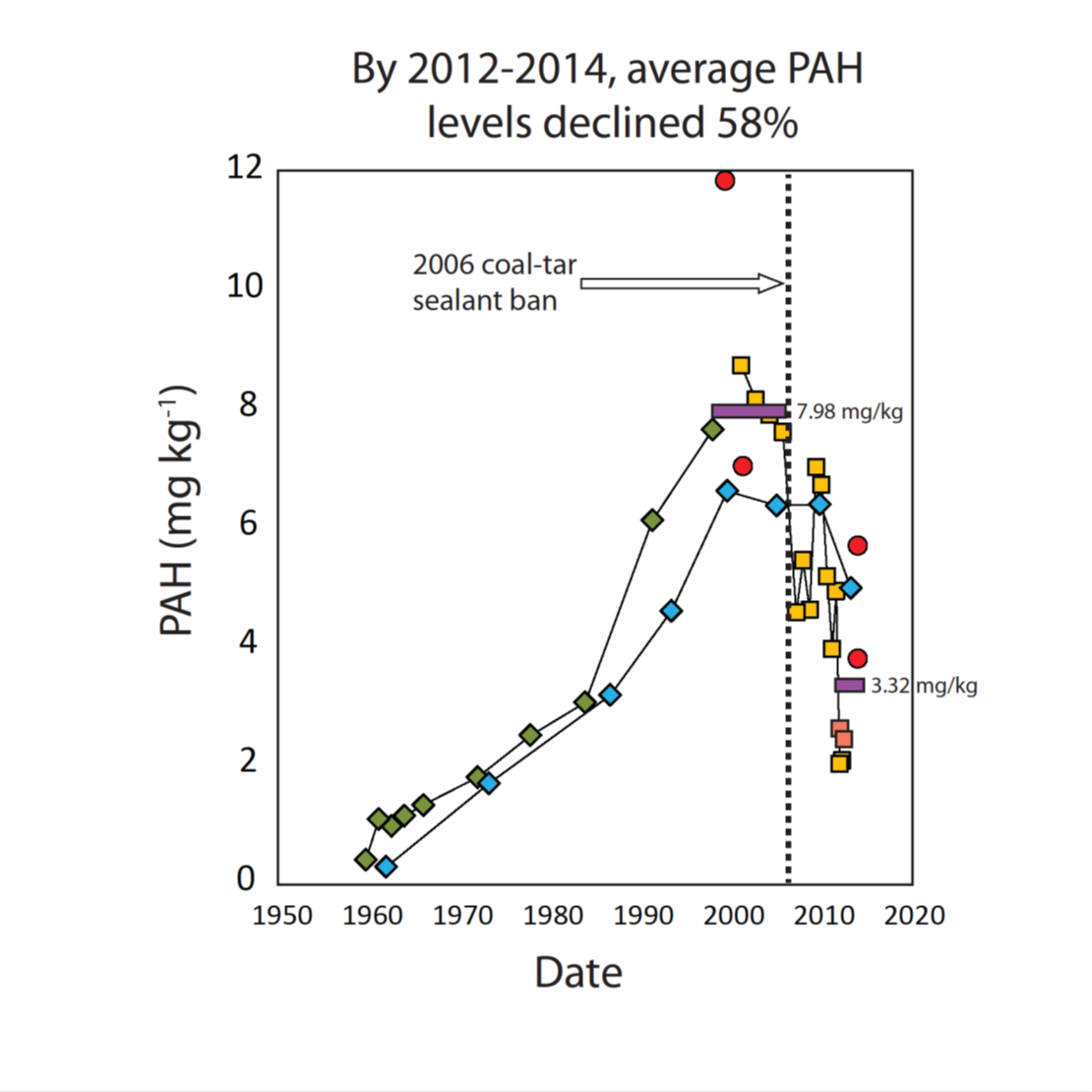 Movement - How does pavement sealant get from parking lots into the environment?

Vehicle tires abrade parking lot sealcoat into small particles. These small particles are washed off parking lots by precipitation and into storm sewers and streams. Sealcoat “wear and tear” is visible in high traffic areas within a few months after application. Sealcoat manufacturers recommend reapplication every 2 to 3 years.

Other sources of PAHs in the environment

Besides urban runoff as a pathway, PAH can originate from atmospheric fallout of particulates from naturally occurring combustion sources like forest fires or from fossil fuel combustion - incomplete burning of carbon-containing materials like oil, wood, garbage, and coal. Automobile exhaust and industrial emissions are additional sources. They contain high levels of PAHs. More PAHs form when materials burn at low temperatures such as in wood fires and cigarettes than in high-temperature furnaces.

Many useful products such as mothballs, blacktop, and creosote wood preservatives contain PAHs. They are also found at low concentrations in some special purpose skin creams and anti-dandruff shampoos that contain coal tars.

Field staff for the Watershed Protection Department watch for sealant applications in progress and freshly sealed parking lots as they drive throughout the city on their other job duties.  Newly applied sealants are screened for the presence of high PAHs.  Enforcement action is taken when high PAH pavement sealant is found to be applied after the ban was initiated.  Enforcement action through municipal court typically involves remediation of the applied sealant.  The requirement for remediation is full removal of the applied sealant and fines.

The city produces and disseminates educational materials to producers, applicators, buyers, and to the general public through various means. City staff also periodically checks distributors to monitor product on their shelves.

Citizens may call in suspected high PAH applications to the City’s 24-Hour Pollution Hotline at 512-974-2550.

The City of Austin has conducted a range of laboratory and field experiments which documented the negative effect that PAHs from coal tar sealants have on benthic invertebrates that live in our streams. This work was a primary support and motivator for the ban of coal tar sealants in Austin

Sealants containing high levels of PAH should not be disposed of as regular garbage. Austin and Travis County residents may dispose of small quantities of these based products at the City of Austin’s Facility Recycle and Reuse Drop-Off Center. The facility is located at 2514 Business Center Drive and is open on Tuesdays and Wednesdays from noon to 7 p.m. Businesses requiring information regarding the disposal of coal tar based products may call 512-974-3443.

If you have specific questions concerning the regulations governing the disposal of high PAH wastes, please contact the Municipal Solid Waste Permits Section of the Texas Commission on Environmental Quality at (512) 239-2334.

When a violation of the ordinance occurs, the City of Austin requires removal of the coal tar sealant. One of the most effective ways to meet this requirement is by a process called ‘shot-blasting’. Shot-blasting uses small steel beads or “shot”, and a blasting machine, to remove the top layer or layers of sealant. Blasting machines come in two different styles, walk behind (self-propelled or push) and ride-on, with varying blasting widths ranging from 8” to 48”.

The City of Austin requires that shot-blasting machines have a dust collection system (bag or cartridge filters) that minimizes or eliminates air-born dust particles containing harmful PAH’s from contaminating nearby soils, lakes or streams.  The removed sealant should be properly contained on the site.  Depending on the size of the removal project, some containment options may be bagging the waste in heavy-duty black trash bags or using a roll-off dumpster.  Roll-off dumpsters should be properly covered with tarps or plastic sheeting to prevent runoff should precipitation occur.  Once the project is completed the generated coal tar waste should be properly disposed of (See “Coal PAH Disposal” under the FAQ section)

Property and business owners should ensure that their contractor is properly licensed and bonded and will use the correct removal and disposal methods.

Listed below are contractors known to provide shot-blasting services for the removal of coal tar-based sealants.  There may be other contractors that can perform the work.  Contractors that are interested in being added to this list may email Christopher Miller to begin the process.

This list is compiled from various listings and company contacts and may not represent all shot-blasting companies that service the Austin area. The Watershed Protection Department does not endorse company products or services and is not responsible for their performance.

For additional information of the recommendations provided, please call 512-974-2550.

Time - How quickly do PAH contaminants from pavement sealants wear off a sealed lot?

There are a variety of forces that wear sealant off of lots and driveways, but the abrasion of tires is probably the dominant one.  In temperate northern climates, snow plows are probably another major factor.  The City of Austin did a photographic coal tar sealant wear study, finding that drive areas wear at about 5% per year, and parking areas at about 1.5%, with an average of about 2.5% per year.  A study in 2010 by the University of New Hampshire found that export of PAHs off of parking lots was much greater in the first three months (1357ug/L) than in the two years following application (17-116 ug/L), although elevated concentrations (52ug/L) of PAH from coal tar lots can persist for at least 5 years (Selbig, 2005).