City Manager to work with Office of Police Oversight and Equity Office on best service delivery model to move social services and public health functions performed by the Austin Police Department (APD) to other City departments or outside government and non-governmental entities.

Rewrite of APD General Orders, audit of APD disciplinary actions and development of a process that engages the Office of Police Oversight, the Equity Office, the City-Community Reimaging Task Force and other community members in developing best practices for public safety training, policies and practices and implementation of the Equity Assessment Tool to measure the equity in public safety outcomes for communities of color and other marginalized groups.

These elements of the reform resolution are considered complete, as of December 2021. Some changes were implemented starting with the 2020 budget and some were for the 2021 budget.

On August 12, 2021, Austin City Council approved a $443.1 million budget for APD as part of the City's Fiscal Year 2022 (FY22) budget. The funding amount ensures full compliance with the recently enacted State Legislation HB 1900 which sets a funding minimum at the higher amount of a city's police budgets from the two prior fiscal years.

The ongoing funding approved in the FY 21 budget that will continue into FY 22 is for a variety of initiatives including the Reimagined Police Training Academy, Office of Violence Prevention, mental health first response, a family violence shelter, permanent supportive housing and services, and other alternative public safety strategies.

Increased funding of $2.8 million to the Housing Trust Fund for anti-displacement initiatives including emergency relocation assistance, the tenant stabilization program, and for projects providing affordable housing.

“We’ve already made tremendous strides in our efforts to reimagine public safety,” said Cronk.  “Our core mission is to ensure that everyone – everyone – no matter who they are or where they live in our community – is valued, is respected, and can count on us to show up for them in a crisis, without fear that they will be treated differently,” he said. Read more. 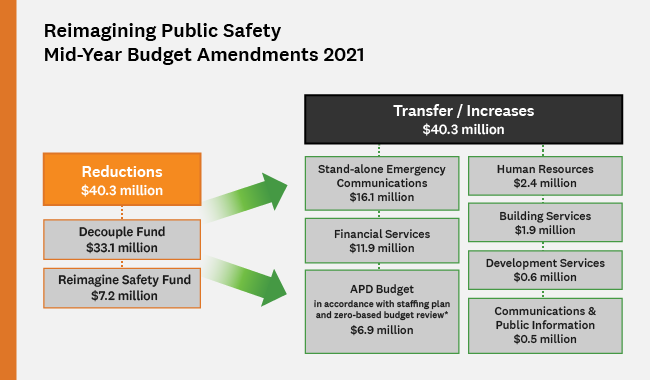 The changes, focused on realigning City services and resources to allow the Austin Police Department to focus on its core mission of law enforcement, includes the creation of a new Emergency Communications Department to handle emergency calls. Read more in English here and in Spanish here. 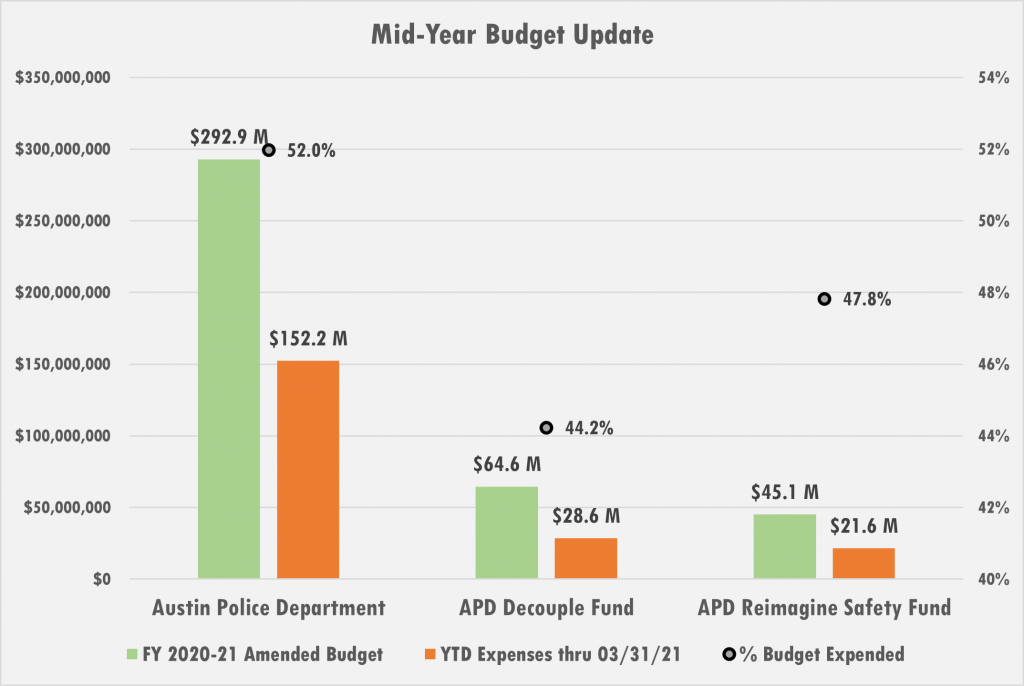 City Council approved an ordinance to create a Forensic Science Department under the control and direction of the City Manager on February 4, 2021. The restructuring transfers APD Forensic Science Bureau funding and positions to the new, independent Forensic Science Department. The change provides an opportunity for the City to achieve a higher level of forensic objectivity and operational independence, in alignment with recommendations included in the Quattrone Report’s comprehensive review of the APD DNA Lab. Those findings were released in October 2020.

APD purchased naloxone for officers to carry with them to assist in treating victims of opioid overdose. The department is working with the Office of the Medical Director on training officers in its use.

APD reinvested $50,000 to hire three counselors and one counselor supervisor to work with victims of trauma.

APD reinvested $15,000 in funds to aid crime victims. The funds will be used for emergency needs, such as clothing.

An investment of $2.5M was budgeted in the FY 2020-21 in Police, Emergency Medical Services, and Downtown Austin Community Court – including an Integral Care contract – for the Homeless Outreach Street Team (HOST). This is a cross-departmental initiative that offers a proactive approach to addressing a person’s needs by referring them to appropriate resources before they reach a state of crisis. This reduces arrests, emergency room visits, and admissions to emergency psychiatric facilities. HOST is working to identify appropriate cases for referral. Integral Care has hired three team members and is actively recruiting to fill other positions. HOST is helping to train new Integral Care team members and will establish a set schedule to partner with Integral Care team.

Resources for Immigrant and Underserved Communities

In March, funds from APD allowed for contract increases related to immigration services provided by the City of Austin. The services include funding for immigration legal services and deportation defense, and counseling. Funds will also be provided for affordable groceries, health and wellness, and financial literacy resources for underserved communities. Substance misuse services will also be provided to low-income individuals through the reinvestment of these funds.

In a memo to Mayor and Council on March 3, 2021, Assistant City Manager for Public Safety Rey Arellano summarized the results of a review of all state and federal grants managed by APD. The review found the projects and programming supported by the funds are in alignment with City Council’s vision for APD policies and practices. The mental health intervention and grant alignment review are outcomes of Council Resolution 20200611-096, along with the decoupling and reinvestment activities summarized in this report.

On March 10, the Public Safety Committee of the Austin City Council received a briefing from the RPS leadership team which provided an update on reimagining activities. The briefing focused on progress in the areas of decoupling (shifting) services and operations from APD to other City Departments, and reinvestments in alignment with the overall goals of resolution 96 to redirect APD funds and positions to alternative public health and public safety initiatives to provide preventative measures that reduce the community needs issues that become public safety issues.

As of February 1, 2021, 9-1-1 callers are now asked if they need police, fire, EMS, or mental health services. This addition is in response to community requests, and Austin represents the first department in the country to include mental health crises in the emergency call triage process. Read more about the initiative. 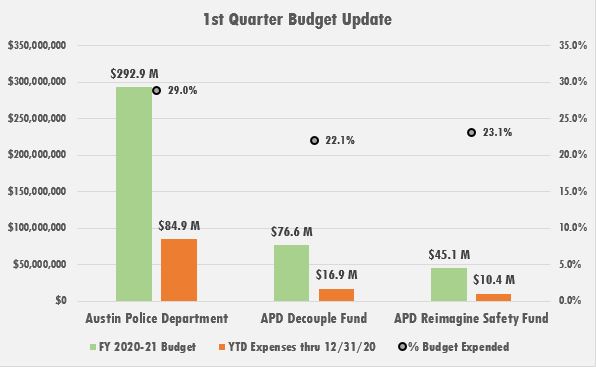 APD is nearing completion of a zero-based budgeting review of their FY 2020-21 budget. This will serve as the base budget for an outcomes-based budgeting approach, informed by the results of the Reimagining Public Safety process.

Several immediate actions have been completed or addressed in the approved 2021 Budget under the framework of this resolution including:

Additionally, as outlined in a memo on August 10, 2020, City staff has developed an initial timeline for transitioning public safety programs and services identified for reimagining. Human resources department staff is conducting leadership team meetings and focus groups with the affected departments to develop recommendations for the City Manager on how to proceed with re-alignment plan with the least amount of impact on department operations and service.

On August 13, 2020, Council approved an APD budget of approximately $290 million which reflects a budget change of $153.2 million.

The adopted budget directs that $153.2 million in police funding to be reallocated in the following ways: 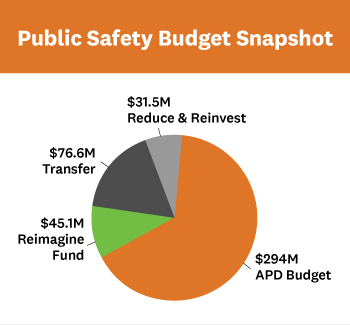 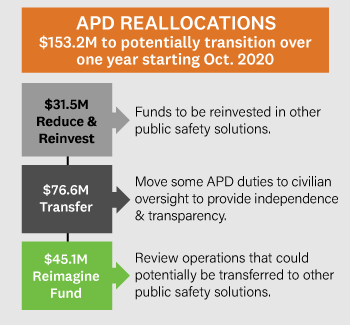 Council also directed the City Manager to return to Council no later than March 2021 to amend the public safety budget following public engagement on the Reimagining Public Safety Process.