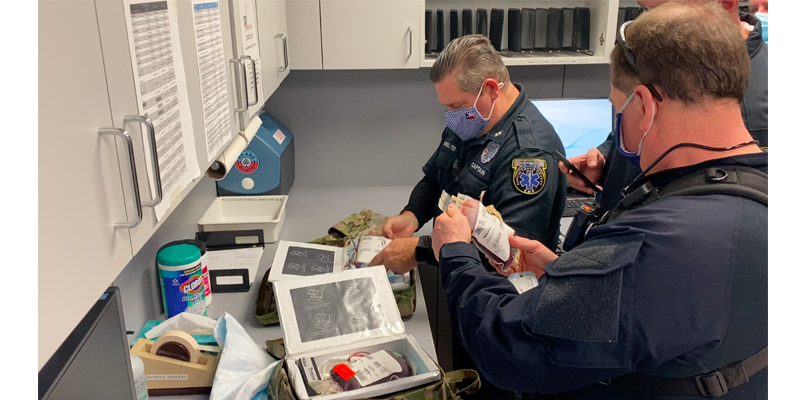 A pilot program that enables paramedics to provide blood transfusions to patients who are hemorrhaging blood before they reach the hospital is already helping to save lives in Austin-Travis County.

Austin-Travis County Emergency Medical Services (ATCEMS), the City of Austin's Office of the Chief Medical Officer, and local blood bank We Are Blood launched the program in December 2021, ensuring that at least two response vehicles are equipped with whole blood at any time.

It has enabled ATCEMS paramedics to give patients who are losing blood in a traumatic or medical emergency a transfusion of Low Titer O+ Whole Blood at the scene of an emergency or on the way to the hospital, saving precious time for patients experiencing life-threatening blood loss.

The blood is carried in specialized coolers inside the ATCEMS units. These coolers maintain an FDA mandated temperature between one and six degrees Celsius.

In the first six months of the program a total of 28 patients have received blood in the field – 15 of them for trauma and 13 for a medical issue – giving them a much higher chance of survival than if they had waited until they arrived at the hospital for treatment.

Excessive bleeding is the leading cause of potentially survivable pre-hospital deaths. Patients who get transfused within 30 minutes of injury or life-threatening hemorrhage have a significantly increased chance of survival.

In launching the pilot program last December, after more than three years of planning, Austin-Travis County became one of several pre-hospital systems in the state who are revolutionizing the treatment of pre-hospital medicine.

“This program represents a huge shift in mindset in how we manage trauma,” said Dr. Jason Pickett, Chief Deputy Medical Director for the City of Austin. “Giving whole blood helps patients and saves lives. We’re not just getting them to the hospital, we’re reversing the effects of shock early, increasing their chances of long-term survival. Early use of whole blood can also reduce the amount of blood a patient has to receive by half, conserving our community resource.”

“By starting trauma resuscitation out in the field we are buying the patients time, getting them treatment earlier so they can make it to the hospital and surgery, increasing trauma survival rates,” said Heidi Abraham, Deputy Medical Director for the City of Austin.

“Even in the first few weeks of this program it became apparent this was a huge need within EMS,” said ATCEMS Captain David Leclere. “One unit of blood can make a difference, and after transfusions we can quickly see blood pressures increase, and an increased level of consciousness.”

Following initial results and data analysis, the City is in the process of expanding the program, as well as developing a strategy for the most equitable deployment of this resource. By the end of 2022 up to 11 EMS supervisor and EMS physician response vehicles are expected to carry whole blood.

ATCEMS is committed to and invested in making the lifesaving resource of whole blood even more readily available to residents and visitors to the City of Austin and Travis County.

For more information about We Are Blood, or to book an appointment at any of their three donation locations or multiple mobile drives, visit  weareblood.org.

In May 2022 Karanai Ravenscroft suffered a life-threatening hemorrhage and needed an emergency blood transfusion, which ATCEMS medics were able to provide on scene and on the way to the hospital, saving precious time and giving her the best chance to fully recover.

Today, June 30, Karanai met the EMS crew who gave her the life-saving blood transfusion. Speaking after the meeting, at an EMS station in northwest Austin, she said: "I needed to see the guys, and tell them what they mean to me. Today my four children have their mommy, my husband has his wife. This program saved my life and the lives of my family."