2015 has been an especially tragic year for Austin traffic deaths— in just over seven months more people have been killed than during all of last year.  For each person who dies, 3 or 4 more people are seriously injured. It’s a tragedy that touches many Austinites and leads us to a question of how many deaths and serious injuries are acceptable?

Safe transportation networks are the foundation for the complete communities envisioned by Austinites in the Imagine Austin Comprehensive Plan. Imagine Austin envisions an Austin that is more walkable, bikeable, and transit-friendly. It calls for a well-connected and safe transportation network that provides an array of options for the needs and capabilities of the diversity of Austinites as well as supporting complete communities across the city.

Vision Zero is a holistic approach which aims to achieve zero deaths & zero serious injuries while traveling by elevating safety as the top priority for the transportation system and requires a collaborative, multipronged approach addressing land use and transportation infrastructure, enforcement, and education and culture change.

Vision Zero has been successful in other cities and states because it treats traffic deaths and injuries not “accidents” but as a preventable, public health issue that can be solved. Some successes include:

Austin’s Vision Zero Task Force came together around the idea that any traffic death is too many. Looking at the top causes of collisions—intoxication, distraction, speed, failure to stop or yield—all are preventable, therefore no death is acceptable. 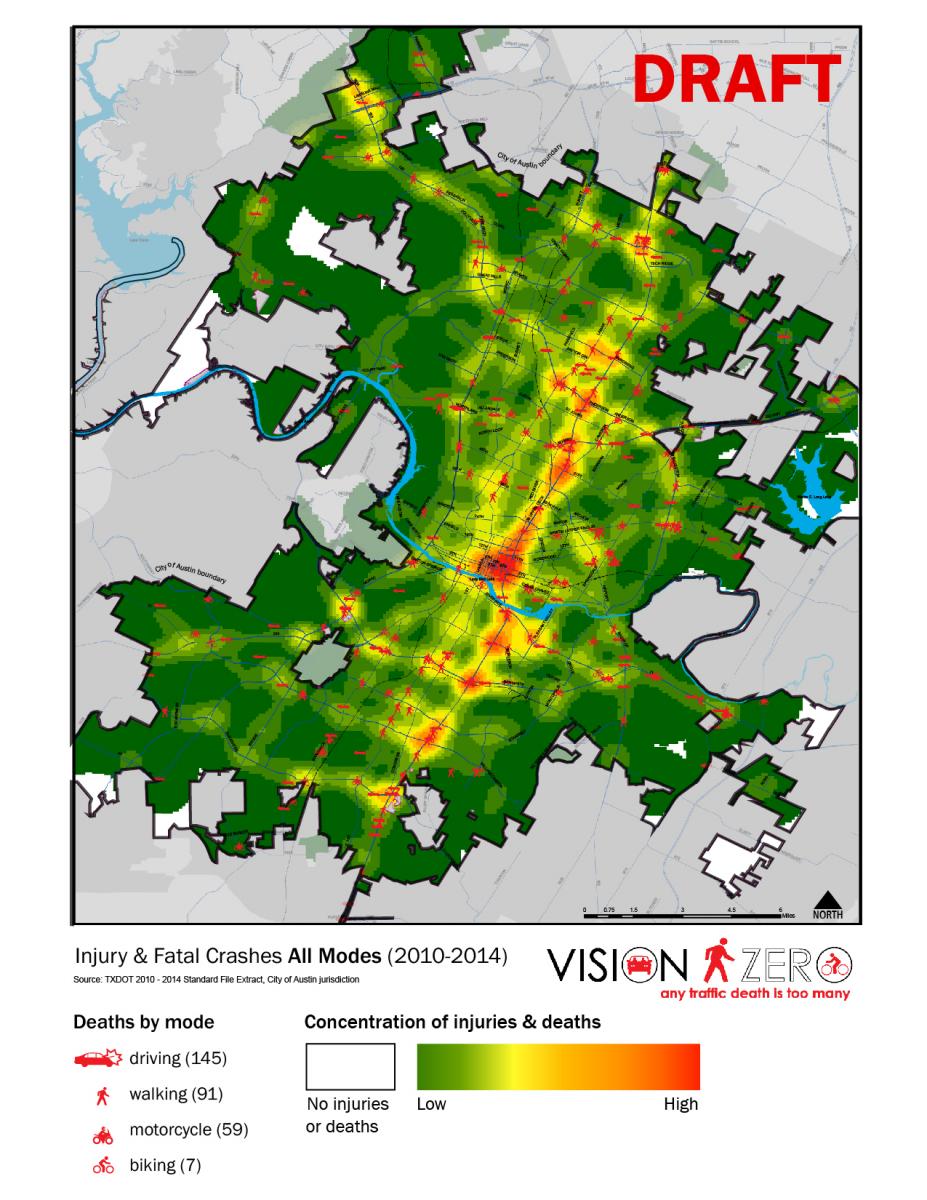 The Vision Zero Task Force convened in January of this year to bolster safety efforts already underway and to work toward holistic solutions for eliminating traffic deaths and injuries. The 60 members of the task force include the Austin Police Department, Austin Transportation Dept., other city depts., state and federal agencies, and community groups, all of which bring different perspectives and expertise on transportation safety. The Vision Zero Task Force is currently creating an action plan to identify short-term strategies for preventing injuries and saving lives. The Vision Zero Action Plan will go to City Council for adoption later this year, but agencies on the Task Force are already collaborating in new ways and changing how we approach traffic safety now.

Additionally, the Vision Zero Task Force has released an initial set of maps that identify the hotspots where deaths and injuries from collisions occur, based on 5-year data from TXDOT. Working with UT’s Center for Transportation Research, the Task Force is digging into the details of where, how, and why fatal and injury collisions occur, using longer-term data to identify patterns in otherwise seemingly random occurrences and create solutions that members of the Task Force can use immediately.

Too many Austinites know too well what it’s like to experience the loss of someone in a traffic collision or trauma of a serious crash. Most of us also know what it’s like to have a close call—maybe as the result of a mistake. As the Vision Zero Task Force moves forward with an analysis of collisions and the Vision Zero action plan to eliminate deaths and serious injuries, the City and its partners on the Task Force are looking at the collaborative solutions to help ensure those mistakes aren’t fatal.

1. Provo, Utah has a similar development pattern and population to Austin, and has experienced growth at the same proportional rates.