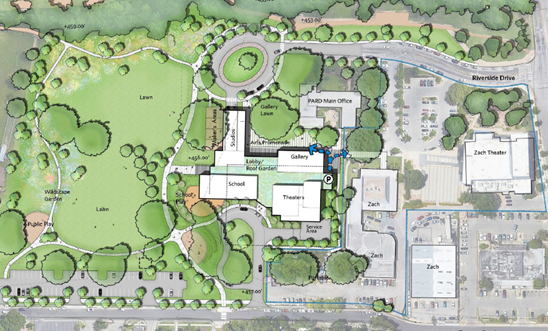 The Austin Parks and Recreation Department is continuing work toward moving the Dougherty Arts Center out of the beloved naval center and into a newly envisioned building to be constructed on Butler Shores Park. Since receiving City Council approval for the building’s location in Spring 2021, the DAC project team has made significant progress in designing a facility that will meet the needs of both PARD and the Austin arts community.

The DAC project team will share the current status of the facility design and information on the Art in Public Places (AIPP) opportunities that will be made available through this bond-funded project. Community members are invited to see firsthand how the new Dougherty Arts Center will inspire Austinites to create community through the arts.

Background
Built in 1947 as a Naval and Marine Reserve Center, the DAC was dedicated to the City and named for the late arts advocate Mary Ireland Graves in 1978. Since then, the DAC has been offering arts experiences for a broad audience through its three main components: The Dougherty Theater, Julia C. Butridge Gallery and the Dougherty Arts School.

As identified in a conditions assessment completed in 2010, the DAC building is beyond repair. The building was established as a temporary structure meant to be razed in the 1970s, but was adopted as a permanent home that has outlived its viability. Following multiple planning and community engagement processes which started in 2018, City Council gave final approval to the location and orientation of the new building in spring 2021.