Algae and Water Samples Negative for Toxins in Bull Creek

Results from lab tests indicate that no toxins were present in either algae or water samples taken on Friday, August 6, from Bull Creek.

When staff took the samples, the creek appeared normal with wispy green algae typical of Hill Country streams. The previous day, the City of Austin was informed that a person developed symptoms that could be associated with exposure to harmful algae after playing in Bull Creek on August 1.

Although the algae samples were negative, the flow of water in Bull Creek spiked twice between the exposure and the samplings. These spikes may have been enough to change the algae in the creek. Out of an abundance of caution, the City revisited the creek this morning and took additional samples. There has not been any change in the appearance of the algae over the past week. Lab results from today’s samples should be available towards the end of next week. 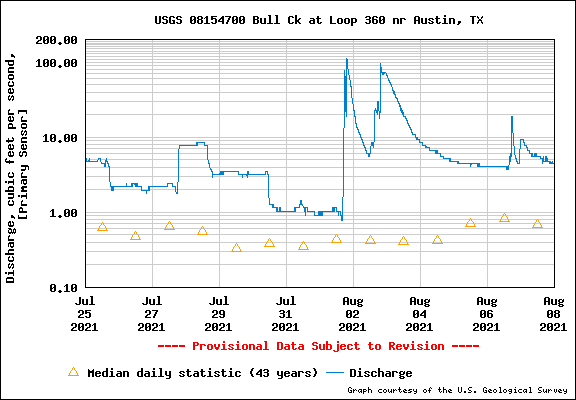 Cyanobacteria, or blue green algae, occurs naturally in Central Texas waterways. Some species can produce toxins under certain conditions, which is called a harmful algae bloom or proliferation. However, harmful algae are much less likely to appear in a creek environment when water is cool and flowing. Harmful algae proliferate more readily in stock ponds, stormwater ponds or stagnant pools or shorelines of a natural water body. Since it is impossible to tell by looking at algae if there are toxins, assume all algae may be toxic and avoid direct contact.

There can be other risks associated with swimming or wading in creeks and lakes. Natural water bodies contain microscopic organisms such as bacteria and parasites. There can also be physical dangers with uneven depths, debris, slippery surfaces, and strong currents. We advise people and pets to avoid warm, stagnant water. Steer clear of any discolored or foul-smelling water. It is always advisable to rinse off after being in a natural water body. Avoid swimming for a few days after heavy rainfall when bacteria levels tend to be higher.

Toxins were first detected in algae in Lady Bird Lake in 2019. The City of Austin ordered specialized lab tests after being told that a dog died after swimming in Lady Bird Lake. We are currently monitoring Lady Bird Lake and Lake Austin for harmful algae every other week. We have had isolated positive tests for dihydroanatoxin at Walsh Boat Landing in June and Jessica Hollis Park in March. We have detected decreasing levels of dihydroanatoxin in algae at Red Bud Isle since June. The City of Austin is currently conducting a pilot program to see if lowering nutrients levels around Red Bud Isle reduces the amount or toxicity of harmful algae in that location.

To date, the City of Austin has only detected toxins in mats of algae that can be found growing on the bottom of the lake or floating on the surface. This means exposure would come through touching or swallowing visible algae. The City is aware of five dogs who died after swimming in Lady Bird Lake in 2019 and warning signs have been posted there for this reason.

In people of all ages, symptoms of exposure to harmful algae may include:

In dogs, symptoms may include:

We encourage the public to call 3-1-1 or 512-974-2000 to report any illnesses in either people or pets from exposure to harmful algae. More information about harmful algae is at AustinTexas.gov/algae.