An endless number of “green” buildings does not a sustainable city make. The infrastructure that serves buildings, as well as the neighborhoods that are formed by multiple blocks and the people who live there, are the building blocks of sustainable cities. In addition to environmental issues such as water and climate, economic opportunity, community well-being, and ecological health are also fundamental ingredients for sustainable neighborhoods and cities.  Put all these ingredients in a pot and let them simmer with a little strategic planning and leadership and you’ll get an ecodistrict.

Part of the challenge is how to take the lessons we are learning from building green buildings, and apply these at the larger scale of neighborhoods and districts. How do we scale up green building innovations and aggregate the benefits so that a larger cohort of people can benefit? LEED® for Neighborhood Development has been an instructive tool in designing new greenfield development, but also has presented certification challenges for neighborhoods being built out in phases over a long period of time. In addition, LEED ND is not really applicable to existing neighborhoods where there is a desire to evolve in a sustainable direction.

EcoDistricts are a recent development in the conversation, and bring together how we address buildings, infrastructure, and residents in order to build partnerships that complete a much bigger, broader vision of how we live in cities. At the heart of an EcoDistrict is “a new model of private-public-civic partnership that emphasizes innovation, transparency, and collaborative action. Success requires the adoption of clear, upfront triple-bottom line performance metrics and a rigorous process management and monitoring framework to help stakeholders navigate planning, project delivery and performance over time” (EcoDistricts, 2014).

The nonprofit organization EcoDistricts is based in Portland Oregon, and oversees the ongoing development of the EcoDistrict tool and performance protocol. There are 8 EcoDistrict performance areas including: Access & Mobility, Energy, Water, Habitat & Ecosystem Function, Equitable Development, Health & Wellbeing, and Community Identity. These themes align well with the implementation categories of the Imagine Austin Comprehensive Plan, and with the goal of creating Compact, Connected neighborhoods.

Examples of EcoDistrict strategic initiatives include district energy and water management, bike sharing, green streets, urban agriculture, safe routes to school, and more. Many of these strategies are already in play in Austin at the policy level and in on-the-ground implementation.

Recognized by the Clinton Global Initiative as part of their 2014 commitment makers, the City of Austin is participating in a program called Target Cities, a pilot application of the EcoDistrict protocol across 8 North American cities including Atlanta, Boston, Cambridge, Denver, Los Angeles, and Washington D.C. 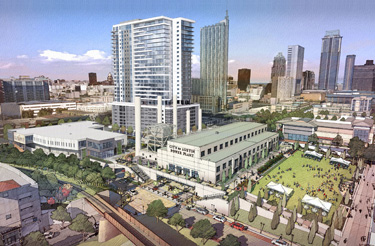 Austin’s EcoDistrict project is the Seaholm Redevelopment, a 70-acre area on the edge of downtown facing Cesar Chavez Street, an ideal opportunity for neighborhood scale, accelerated innovation. Under the expert leadership and management of the City’s Economic Development Department the Seaholm District is one of the City of Austin’s signature public/ private partnership redevelopment projects with maximum visibility and a very high level of financial, political and community support. Eight blocks are already in redevelopment, and will include a new Central Library, a boutique hotel, 1,475 residential units, offices, and retail space. All new development complies with LEED ® or Austin Energy Building Criteria. Apart from the built environment, the Seaholm EcoDistrict includes more than 44 acres of open space and nearly 10 acres of green infrastructure. Future plans include a community garden that will benefit the entire district, both residents and businesses. Additional projects in the district include:

Take a step back and look at the bigger picture, and you’ll see that these EcoDistricts can have a significant impact on how our future city unfolds and how we can meet the challenges of growth. As effective tools for sustainable change EcoDistricts can help to implement the goals of Imagine Austin through the application of big picture sustainable design innovation at the multiple block scale. At the intersection of buildings, infrastructure and people, neighborhoods shape the social and cultural landscape in which we live, work, learn, and play.

A Watershed Moment for the South Central Waterfront