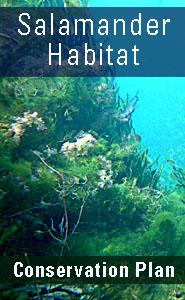 Jollyville Plateau salamanders are currently listed as threatened under the Endangered Species Act as of September 2013. Populations have declined in urbanized watersheds but remain stable in undisturbed portions of their range.

The ideal habitats for the Jollyville Plateau Salamander are springs, spring-fed streams, and caves with flowing water.  Most of the known populations are surface dwelling, or epigean, although this can be somewhat of a misleading classification because the salamanders will retreat to underground refugia during dry periods when the springs no longer flow at the surface. 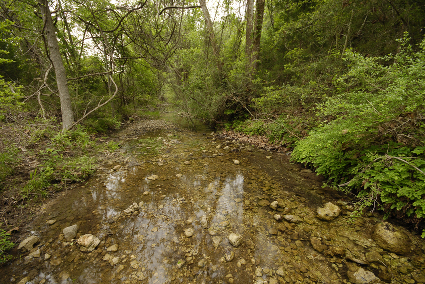 There also are at least a half dozen caves in the Buttercup Cave system inhabited by salamanders.  These salamanders are called troglobites because they spend their entire lives underground (although many may be able to survive on the surface, in which case they would be considered troglophiles).  It is unclear whether all cave populations are more closely related to each other than to surface populations, but it is clear that there is variation in morphological appearance among the different populations of cave-dwelling E. tonkawae.  Researchers currently are examining the population genetics of this species, which will give more insight into the relationships among the cave and surface populations. 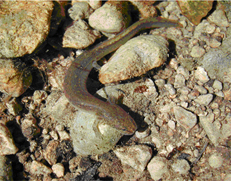 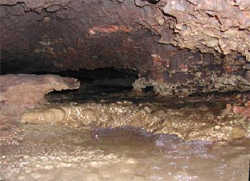 This is a picture of the cross-section of a stream bed when there is no surface flow and the water table has retreated to a sub-surface level.  The salamanders retreat with the water level and live under the stream bed until the stream begins to flow again.  Down there, they can move between the interstitial spaces created by larger stones below the surface of the stream, as shown in this picture. 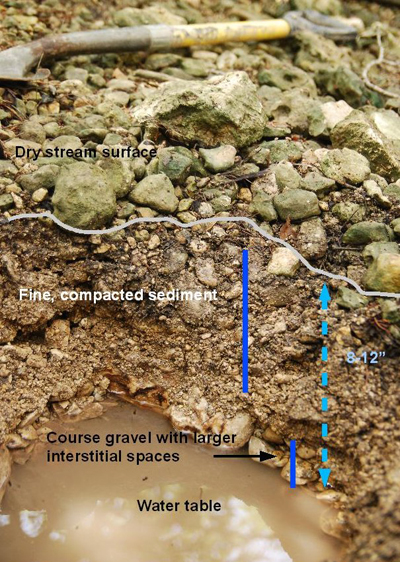 The City of Austin initiated an intensive two-year study in 1997 and 1998 to collect baseline information about the JPS. This effort established nine monitoring sites in three watersheds (Bull, Long Hollow, and Shoal) where transects were searched periodically and all salamander observations were recorded (direct count survey). From 1999 to 2003, City of Austin biologists continued to conduct direct count surveys at some of these original monitoring sites, but on a less frequent basis. Beginning in 2004, City of Austin biologists expanded monitoring efforts to include all nine long-term monitoring sites as well as new sites in other watersheds (Cypress, Walnut, and West Bull). The purpose of these surveys was to assess trends in relative abundance, habitat conditions, and seasonal variation in reproduction.

Recent efforts to understand the population dynamics of Jollyville Plateau salamanders began in response to the City’s plan to build a water treatment plant (WTP4) at the headwaters of Bull Creek, an ecologically-sensitive area and home to many large populations of salamanders.  This included a mark-recapture survey that tagged salamanders so they could be studied at three different sites to compare the effects of the proposed water treatment plant before and after construction.  In the past, all monitoring was conducted by periodically counting all salamanders observed in a given area.  However, this method did not take into consideration capture probability (the likelihood of capturing an animal that is present), which can have a large effect on estimated population size.  Mark-recapture allows for estimation of capture probability, and thus, much more accurate approximations of population size in addition to estimates of survival and migration.

In December 2007, the City Council voted to purchase an alternate site to move WTP4 out of the Bull Creek watershed.  However, the mark-recapture portion of the study is still ongoing, although with less frequent sampling.