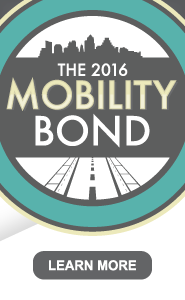 This Frequently Asked Questions (FAQ) is designed to provide general information about the proposal that will be presented in the November 5, 2013 election for the consideration of the registered voters of the City of Austin The publication does not advocate passage or defeat of the measure and is intended for informational purposes only.

This Frequently Asked Questions (FAQ) is designed to provide general information about the proposal that will be presented in the Nov. 5, 2013, election for the consideration of the registered voters of the City of Austin. The publication does not advocate passage or defeat of the measure and is intended for informational purposes only.

B. What is affordable housing?

C. If approved, who would be served by these bonds?

The people who may be eligible to participate in programs funded by the City’s Affordable Housing Bonds are described in the Voter Information Flier. The 2013 Income Limits for the City’s Neighborhood Housing and Community Development Department programs, including the 2006 Bond Program and (if approved) the 2013 Affordable Housing Bond Program can be viewed here. The City expects to provide such funding by partnering with organizations that offer affordable rental and ownership housing and that support the preservation of existing affordable housing.

E. Are voter-approved bonds the only source of funding for the City's affordable housing programs?

No. Funding for the City’s affordable housing programs has been provided by other sources, including private developers and other public sources. These sources have been used in conjunction with the City’s 2006 housing bonds.

F. How long do the investments made using bond funding stay affordable?

Developments funded through the City of Austin’s Housing Development Assistance Program can be affordable up to 40 years for rental housing and up to 99 years for ownership housing.

The property tax rate is composed of two parts: the operations and maintenance rate and the debt service rate. The debt service rate is set according to the amount of revenue necessary to make the City’s payments for tax-supported debt, such as voter-approved general obligation bonds.

When voters approve bond propositions, the City does not issue all of the debt immediately. Instead, debt issuances are spread out over several years. By monitoring the annual spending needs and not issuing all the debt at one time, the City can reduce debt service costs and keep the debt service tax rate more stable from year to year.

For additional tax impact and other financial information, please refer to the City’s budget documents available online at www.austintexas.gov/finance.

H. Where can I find information about the 2013 Affordable Housing Bond?

The 2013 Affordable Housing Bond Voter Information Flier, which can be viewed here, provides general information about the proposed affordable housing bonds. You may also call (512) 974-7840.

How does the City decide which capital projects to undertake?

Capital improvement projects range from a new curb ramp or sidewalk to construction of multimillion- dollar facilities, such as public libraries and cultural centers.

The City identifies potential capital improvement projects using technical assessments of infrastructure condition and need, public input received through individual department’s planning efforts, staff input and requests from City Boards and Commissions. The annual project identification and prioritization process typically begins early in the calendar year with each City department conducting an analysis to identify capital project needs for the next five years. Part of this analysis includes the review of spending plans for completing existing capital projects and programs as well as the allocation of General Obligation bond funding to projects that meet the public purpose of bond propositions approved by voters.

These departmental spending and funding allocation plans are then submitted to the Capital Planning Office and the Budget Office of the Financial and Administrative Services Department, which review the projects and compiles a five-year Capital Improvement Program (CIP) Plan. The CIP Committee of the Planning Commission regularly reviews the CIP Plan during its development, at which time citizens have the opportunity to provide comments and feedback. The full Planning Commission gives the five-year CIP Plan final approval. The CIP Plan functions as a planning and budgeting tool, and serves as the basis for the City’s annual Capital Budget.

How does the City of Austin’s debt compare to that of other cities?

In September 2012, the City of Austin had about $830 million in net total tax-supported General Obligation bond debt. This is debt that is directly supported by property tax revenue.

Austin's debt per capita is $1,287. The debt-to-assessed value (AV) ratio is 1.24%. This means that the City’s debt is 1.24% of the total assessed value of properties within city limits. These figures are lower than the national median for cities with more than 500,000 people, according to Moody’s data. The national median debt per capita is $1,525 and the median debt-to-AV ratio is 2.2%.

The City’s credit rating shows that it maintains a good standing with the credit rating agencies and is looked at favorably in how it implements capital programs and structures its debt. 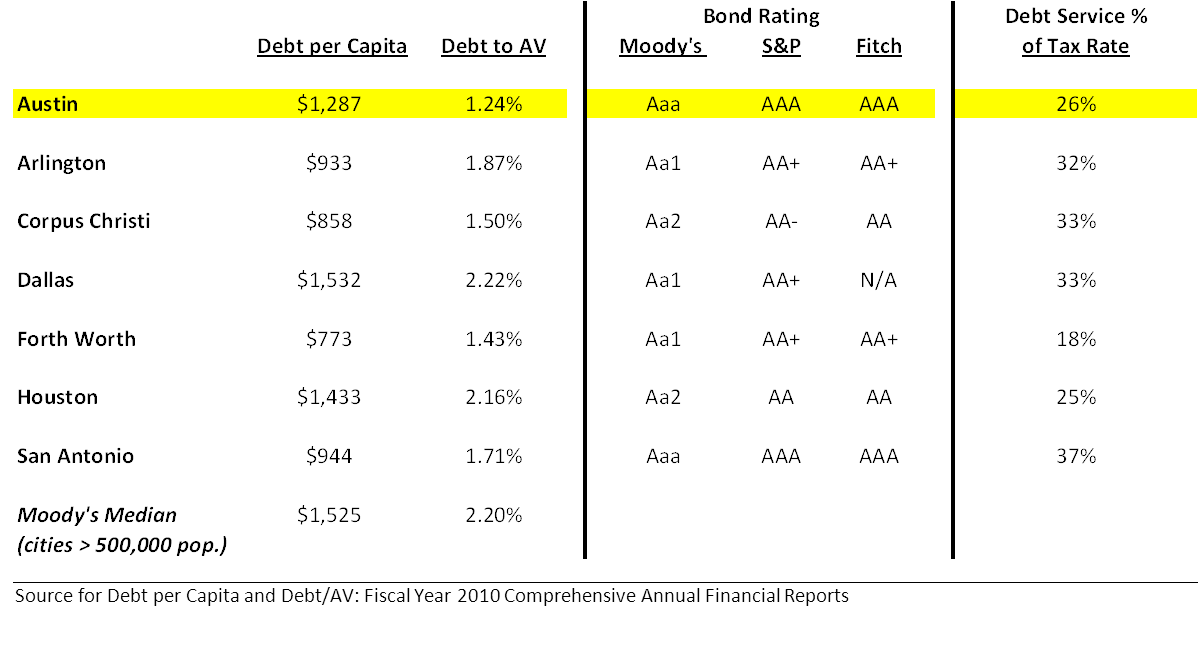 How does the City's Capital Budget differ from its Operating Budget?

The Operating Budget includes personnel costs and annual facility operating costs. It is funded primarily through local property and sales taxes; revenue transfers between departments; licenses, such as building and development fees; franchise fees for a company’s use of the City’s rights-of-way; charges for services; fines and other smaller sources of revenue such as interest on investments.

City Council holds public hearings on the proposed operating and capital budgets and then approves both budgets in August or September for the following fiscal year, which begins Oct. 1.

How is the Capital Improvement Program funded?

The Capital Improvement Program is supported by a number of different funding sources, including debt, operating transfers, grants, and various other smaller revenues. The type of funding utilized for a project can vary according to the type of project as well as the department. Debt sources include public improvement bonds (voter‐approved General Obligation bond programs), certificates of obligation, contractual obligations, and commercial paper.

The types of funding used for a project vary based on the type of project and whether the City department or agency overseeing the project is part of the General Government or Enterprise Departments. General Government departments are primarily funded through property and sales tax revenues. Enterprise Government departments, such as Austin Energy and Austin Water Utility, generate revenue from the sale of services (ie: utility rates and user fees) and use this revenue to fund capital improvement projects and operations.

The City currently has four active major bond programs, including 2006, 2010, 2012, and 2013. When a bond program is approved by the voters, the full authorized amount is not appropriated all at once. Instead, it is appropriated in installments in accordance with the prioritization, coordination, and timing of projects over the life of the bond program.

The following chart shows the new appropriations for the proposed FY 16-17 Capital Budget by funding source and program. New appropriations, or allocations of funding, and what the City plans to spend in the fiscal year are different. Full appropriations for capital projects are required for the City to contract professional service providers even though the funds may be expected during the course of multiple fiscal years. Expenditures may span multiple years because some capital projects take several years from design to construction to be completed. 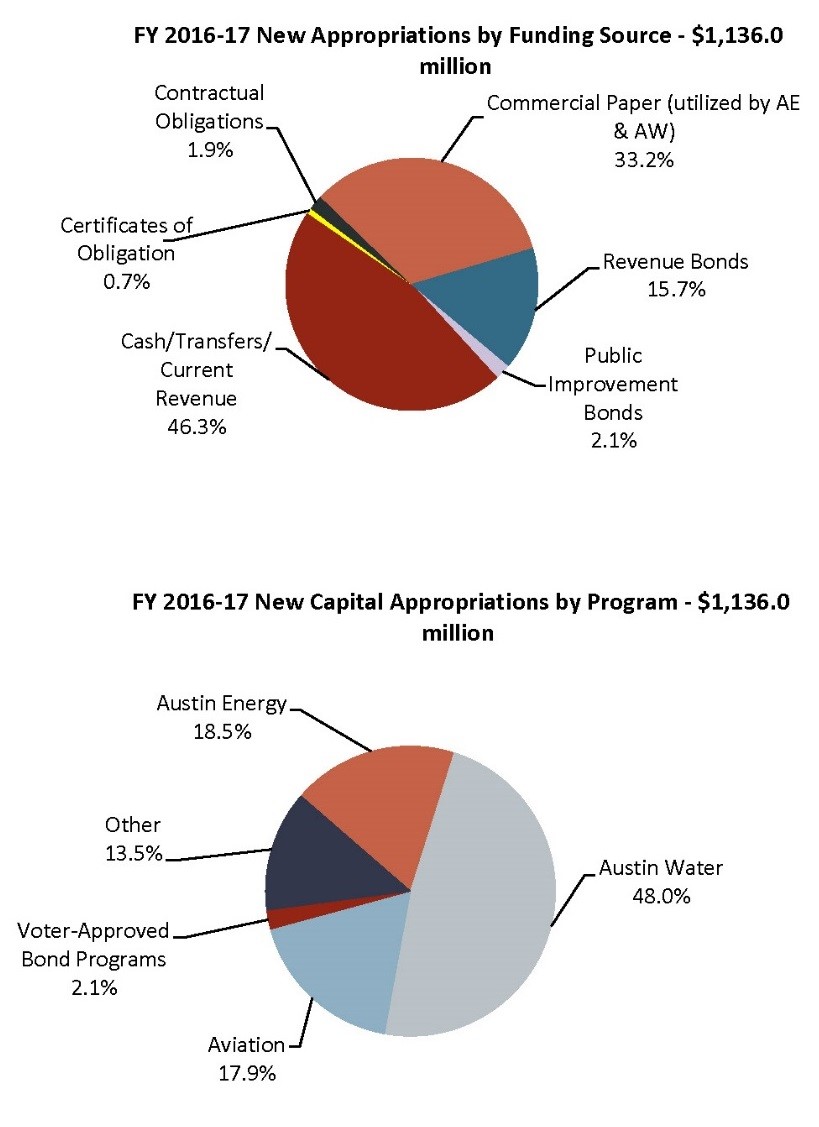 How much in prior year bond authorization is unspent and what is the plan to spend it?

When voters approve bond propositions, they are giving the City authorization to sell bonds (borrow money) to fund long-term capital improvement projects. As of September 2012, the City had about $335 million in unspent bond authorization. Prior to the 2012 bond election, the most recent City of Austin bond elections were held in 1998, 2000, 2006 and 2010. 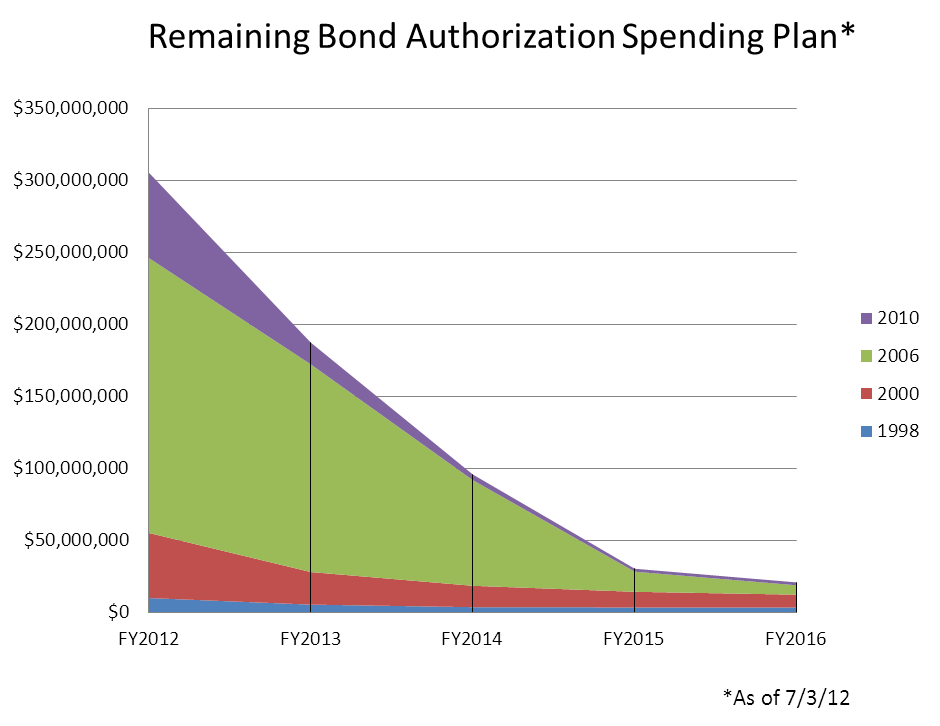 Is there a committee that oversees the City’s General Obligation bond programs?

A seven-member citizen Bond Oversight Committee has been appointed by City Council to review the annual allocation of funds and spending plans for the 2006 and 2010 bond programs as well as future bond programs, including the 2012 Bond Program. The Committee is responsible for helping ensure efficiency, equity, timeliness and accountability in the implementation of voter-approved bond programs.

What interest rate does the City pay on General Obligation bond debt?

What is a capital improvement project?

A capital improvement project is any major improvement to City facilities and infrastructure. Projects may include construction and renovation of recreation centers and libraries, acquisition of parkland, repaving of streets, replacement of water and wastewater lines, provision of power for residents and the purchase of new fleet vehicles and IT networks. Collectively, these projects are referred to as the Capital Improvements Program. Capital improvement projects are varied, so some may require years of planning and construction while others may be completed in a shorter timeframe.

Where can I get updates on General Obligation bond programs and projects?

The Capital Planning Office provides quarterly updates on the 2006 and 2010 bond programs, and will begin providing updates on the 2012 Bond Program. Those materials may be found by visiting the City’s Bond Oversight Committee webpage.

The City is addressing ways to improve its reporting on the Capital Improvements Program and bond spending.

Why and how does the City use bonds to fund some capital improvement projects?

GO Bonds are backed by the full faith and credit of the City of Austin. This means the City is obligated to pay back the bonds by pledging its ad valorem taxing power, or in other words its ability to collect property taxes, to repay the debt.

Bond debt can be compared to a home mortgage that is repaid over time, while O&M expenses are like the daily household expenditures that are paid for immediately, such as groceries. Like buying a house, major capital improvement projects, such as park or library improvements, have a long useful life, so their cost is spread out over many years and paid for by current and future citizens who use them. The debt is typically financed over a 20-year period.

Why does it sometimes take a long time before citizens see construction of projects associated with voter-approved bonds?

In some cases, voter-approved bonds are intended to pay only for initial phases of a project, such as preliminary engineering or design, rather than the entire project from start to finish. By allocating funding to the early phases of a project, it enables the project to be eligible for future funding opportunities including federal grants, state grants, or other grants or partnerships while freeing up resources for other projects to move forward as well.

Why does the City have multiple General Obligation bond programs?

Voter-approved General Obligation bond programs typically overlap because capital improvement projects may take several years to complete from planning to design and construction. As a result, spending may resemble a bell curve, with the largest amount of authorized funding being spent a few years after the bonds are approved by voters and then tapering toward the end of the bond program.

If a bond election is held after all of the previous bonds are spent, the result could be a lull in delivery of capital improvement projects.