A bypass tunnel is one of three alternatives under consideration for reducing flood risk along the middle portion of Williamson Creek. This alternative includes constructing a 26-foot diameter tunnel 50 to 80 feet below Stassney Lane. Starting in the Bayton Loop area, the tunnel would release water downstream of Congress Ave. The tunnel would divert floodwaters from Williamson Creek during floods, but not stop water flowing through the creek from smaller storms. It would be designed to avoid impacting houses downstream. 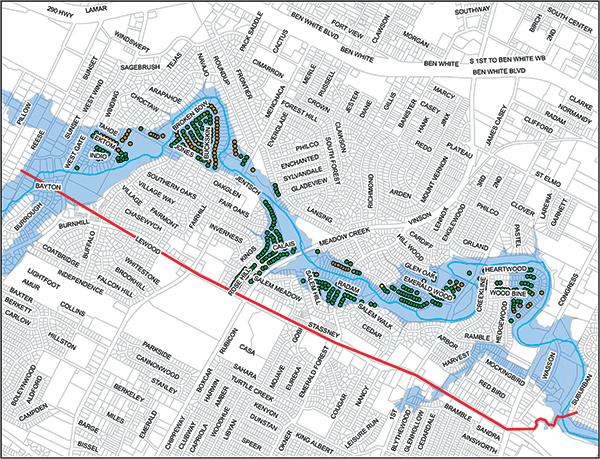 The red line represents the proposed alignment of the tunnel. Green dots show structures that would no longer be at risk of flooding in a 100-year storm. Orange dots shows structures with a reduced risk. Please note that this map is based on preliminary data and is subject to change.

The tunnel would be bored underneath Stassney Lane, meaning there would be no need to dig up Stassney Lane to install the tunnel. However, there would be short-term traffic and environmental impacts from construction. A federal permit and local variances are likely needed and there would also be some construction in the Edwards Aquifer Transition Zone. However, the majority of the creek would remain untouched. In addition, the City would need to buy easements from some private landowners.

This alternative provides significant protection from flooding without displacing people from their homes. However, it would take the longest of the three alternatives to implement.

The proposed tunnel would provide flood control via a 26-foot diameter, concrete-lined bypass tunnel that runs for about 2.4 miles. The depth of the tunnel would range from 50 to 80 feet below the ground. The tunnel could divert up to 15,000 cubic feet of water per second.

The bypass tunnel would release water into a small tributary of Williamson Creek just downstream of South Congress Ave. An outfall at this location does not appear to affect houses. This was not the case for potential outfall locations between Menchaca Road and South Congress Avenue.

There are a multitude of options for the locations of inlets where water would enter the tunnel. However, an inlet pond at Bayton Loop, where the City owns approximately eight acres, provides benefits for the entire project area.

The subsurface materials below Stassney Lane would be excavated using an open-face tunnel boring machine. Excavation operations would likely start at an initial workshaft near South Congress. Four additional workshafts may be needed along the length of the tunnel during construction.

Construction impacts would include potential roadway detours and traffic pattern changes, utility relocation, and increased noise. These impacts would be temporary, but have the potential to disrupt the local community.

There are no documented occurrences of any threatened or endangered species in the construction area. Construction of the bypass could be considered a long-term investment in the stability of the creek. It might limit the less frequent but more drastic transformations of the creek channel that occur with larger storm events.

The proposed inlet facility location is within city-owned property. The proposed outlet facility location would require the acquisition of approximately 1.25 acres of land. This alternative also requires two acres across 34 different properties of permanent drainage easement. An additional 9.5 acres across 46 properties of permanent drainage easement would be required to mitigate the marginally increased flood flows downstream.

Due to the depth necessary for the bypass, there are minimal anticipated water or wastewater utility impacts. There are roughly 3,000 linear feet of decommissioned water and wastewater lines in Bayton Loop which would need to be removed for the inlet facility and pond.

The time of implementation for this project, once funding is available, is anticipated to be 7 to 10 years.

Of all the proposed alternatives, the bypass is anticipated to have the highest operations and maintenance costs. It will be necessary to dewater the bypass to perform maintenance which can cost in the millions of dollars. Management of storm debris will be another major issue.