Public Artwork at the Central Library

The Art in Public Places Program has commissioned artworks in and near the Central Library and Seaholm EcoDistrict. 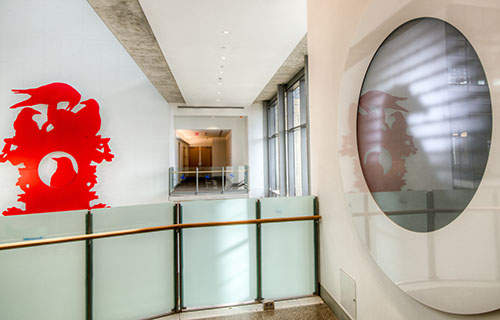 CAW, by artist Christian Moeller, is a 37-foot-tall kinetic sculpture resembling a gigantic cuckoo clock overtaken by blackbirds. It is accompanied by an LED screen on the fifth level of the library, which features an artist-created mystical black bird set within a Texas landscape. Instead of running on a conventional video loop, the bird's behavior and gestures on screen are controlled by a computer program, with the aid of an external human sensor and remote control kit. The artwork is inspired by Austin’s Grackle population and, since the artwork was created for a library, by the strong presence that black birds occupy in literature and mythology-- from the Greek myth of the god Apollo (who reportedly turned the bird's feathers from white and silver into black), as well as Edgar Allen Poe’s famous poem, “The Raven,” and Alfred Hitchcock’s thriller “The Birds”. The art piece contributes a strangely domestic element to the overall ambience of the Central Library, like a fireplace or an aquarium would. The artist hopes that it will be something we won’t tire of looking at, an object of character that grows on us and becomes a friendly companion during our hours of contemplation and thought. Mounted on the six-story wall in the library's atrium, it is dynamic and visually-engaging, enhancing the height and openness of the building's architecture. 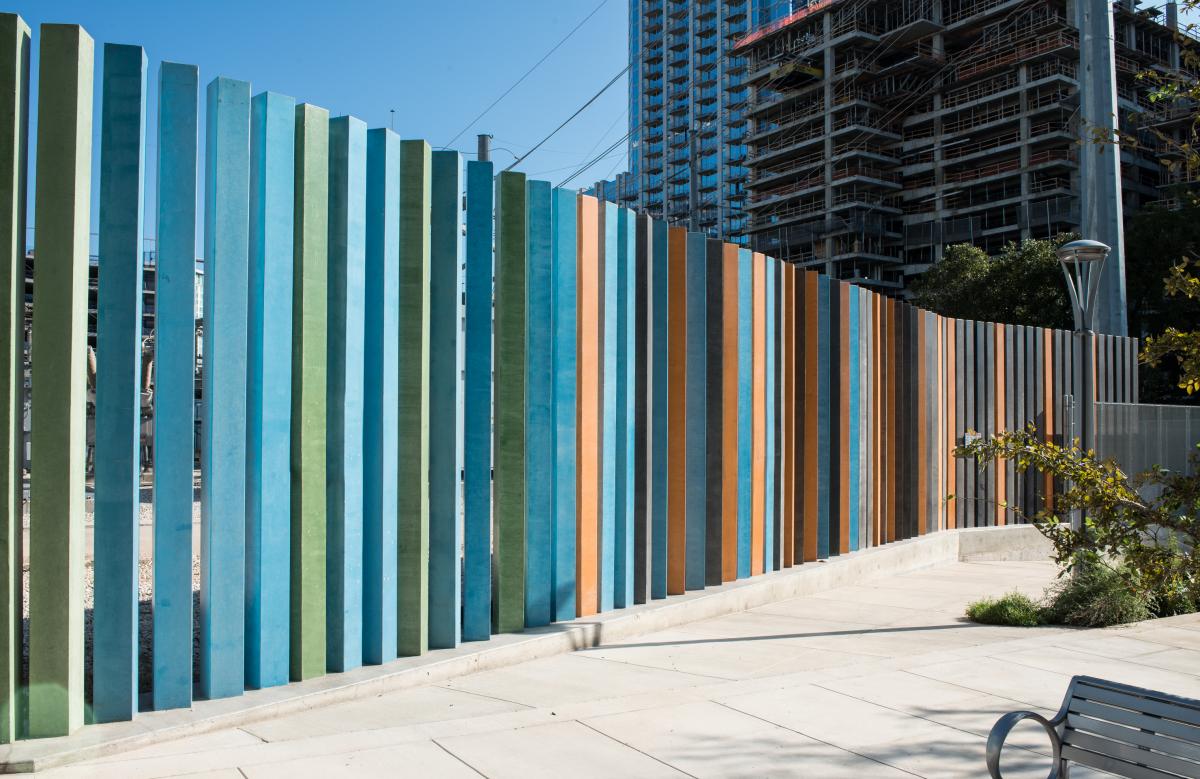 Power Picket, by artists Nader Tehrani and Dan Gallagher of the art/architecture studio NADAAA, enriches visitors' experience of the Seaholm EcoDistrict, while simultaneously keeping people safe and the electrical equipment secure within the District's Austin Energy electric power substation. The largest artwork in the AIPP collection to date, the installation is composed of pigmented precast concrete pillars on the north and south sides, and perforated metal panels on the east and west sides. The work straddles the line between art and infrastructure, balancing practical and aesthetic concerns. It responds to visitors' speed and scale when approaching the work, offering different visual experiences for pedestrians, cyclists, drivers, or those looking at it from the window of a vehicle or a nearby high rise building. 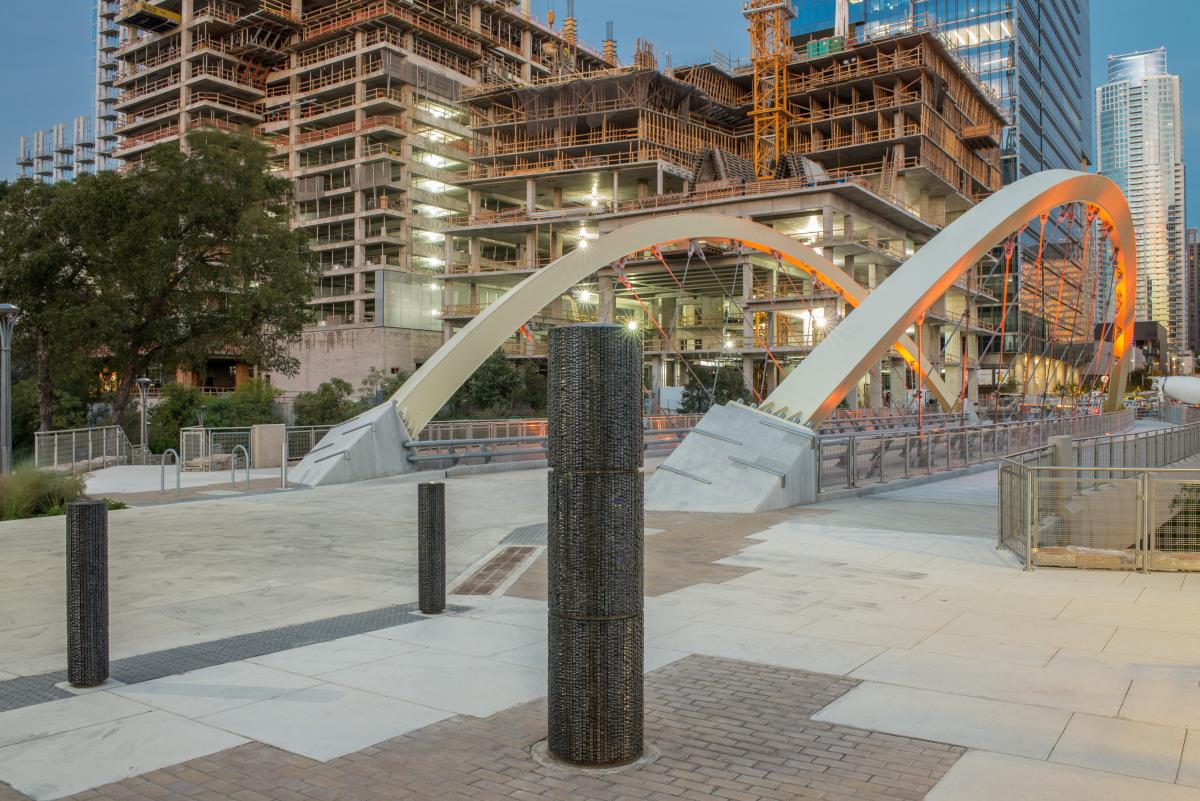 Array, by local artist Judd Graham, is comprised of hand-forged and textured steel sleeves installed over nine of the bollards along the street between Shoal Creek and the Seaholm Power Plant. (Since the 2nd Street Extension is a woonerf, or festival street, the bollards are used to define the road from pedestrian space, keeping people safe.) The companion work, Spin, is a seven-foot-tall sculpture that invites interaction with viewers of all ages. Resembling Array in its material and fabrication technique, this whimsical work is designed to be spun. Made of mild steel, both Array and Spin are heavily textured, with random patterns that create an organic look for this beautiful urban street. 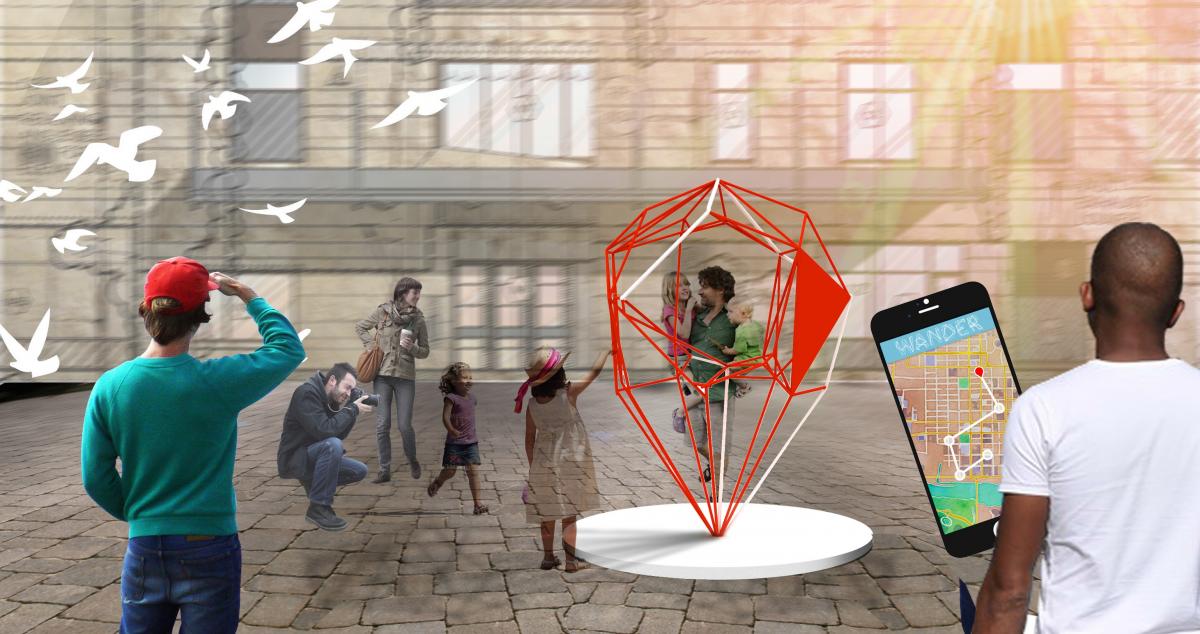 Wander, created by local artists Chris Gannon, Chadwick Wood, and Brockett Davidson, is a playful framework that leads participants along two simultaneous journeys - one through Austin’s rich urban fabric and one through a choose your own adventure style narrative. The artist team worked with local writers and illustrators, developing four separate adventures that an explorer can engage multiple times, seeing different points of interest and creating a new experience each time. The adventure begins in front of the new Central Library at the sculptural starting point known as the Beacon. The Beacon directs the users to a mobile web application or a printed edition to be checked out from the library. Upon selection of one of the four storylines, the user is presented with the first chapter. Each chapter ends with choices which direct the action in the story, prompting the adventurer to physically move to the next location in Austin. The locations include historic sites, public art installations, and the eclectic nooks and crannies within Austin's urban core. Visit wanderatx.org for more information. 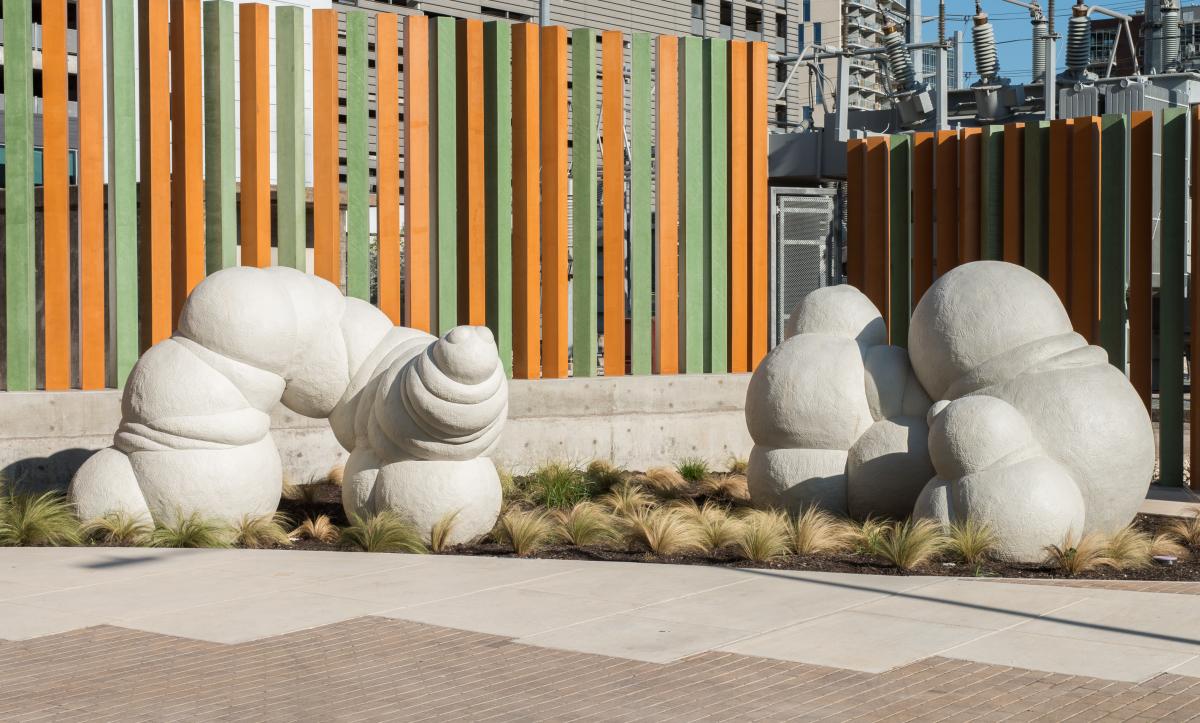 Tall Solo, Big Mama Baby, and Little Mama are three sculptures by Texas artist Sharon Engelstein that make up the family group titled Crullers. Inspired by the many possible definitions of family, the creature-forms hint at the familiar while inviting interpretation and conversation. One viewer might see an animal, while another might see a spacecraft, or scoops of ice cream or a rock formation. The artist used steel armature, milled foam and pigmented glass fiber reinforced concrete to create these whimsical shapes. Taking inspiration from beloved animals, specifically elephants and hippopotamuses, the artist crafted form and texture to evoke the sense that these sculptures are creatures. Big Mama Baby and Little Mama are nestled together within soft grasses across from the new Central Library, patiently waiting for Tall Solo, who has "wandered away" to 3rd Street and West Avenue.

Accordion16 is a massive mural project that was a collaboration between Austin muralist Josef Kristofoletti and Italian muralists Sten n Lex.  It was commissioned largely by the Seaholm Development with additional support from Art Alliance Austin and the Cultural Arts Division of the City of Austin Economic Development Department. The mural is over 300 feet long and covers an undulating retaining wall on Walter Seaholm Drive between 2nd and 3rd Streets. The mural was installed over about 2 months in the summer of 2016. 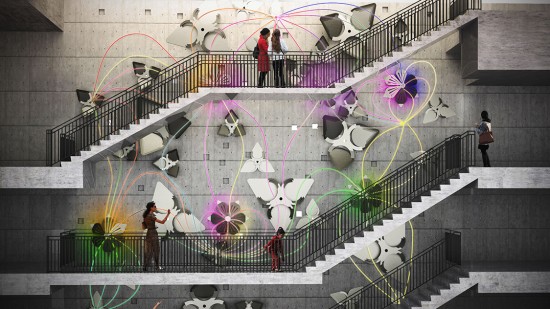 Golden Afternoon, by Urban Matter Inc. is a responsive public art installation in the parking structure of the Seaholm Redevelopment Project. Inspired by the wildflowers of Texas, the installation mimics a hanging garden that has overgrown from the flower beds on the plaza level, down the open stairwell, making its way into the parking structure. Reminiscent of a trip down the rabbit hole from Alice’s Adventures in Wonderland, the artwork experience is heightened by lighting which responds to people moving up and down the stairs. 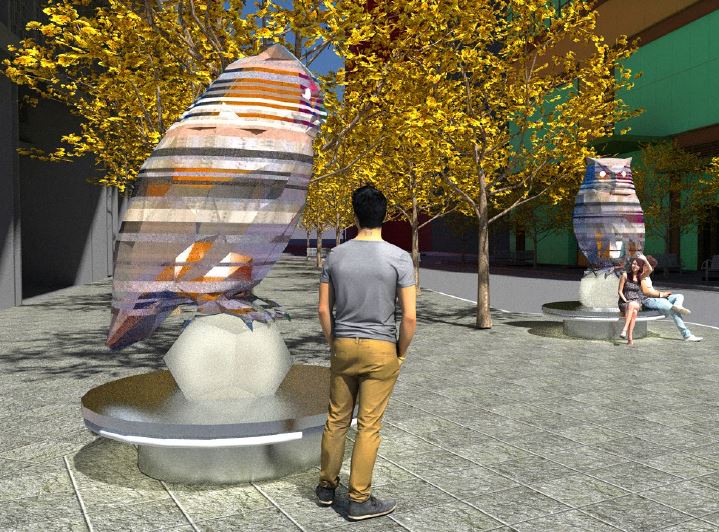 Inspired by the 18th-century robotics of Wolfgang Von Kempelen, Kempelen’s Owls, by New American Public Art, will be an interactive sculpture that fosters curiosity. Two Texan great horned owls, each standing 7’ tall and constructed of layered metal and composite materials, will perch atop dodecahedrons (12 sided geometric shapes) and silently observe surrounding passersby. The interactive features of the work are hidden, awaiting discovery by visitors who can activate them to trigger movement in the owls