Proposition B and Homeless in Austin

On May 1, 2021, Austin voters approved Proposition B, making it a criminal offense (Class C misdemeanor punishable by a fine) for anyone to sit, lie down, or camp in public areas and prohibiting solicitation of money or other things of value at specific hours and locations.

Austin Police Department is working with other city departments and community-based providers to promote voluntary compliance for people who are camping in public spaces in violation of the new law. Officers are taking action when voluntary compliance does not occur through citations and in some cases, arrest.

Passage of Proposition B

What does Proposition B actually do?

When do these laws become effective?

These laws became effective on May 11, 2021 when the City Council officially certified (called “canvassing”) the May 1 election results.

What are the penalties for violating these laws?

Most persons who receive a citation for violating f these laws will be eligible to participate in a deferral or conditional dismissal program instead of receiving a fine, if that option is appropriate to address social service needs. In addition, if a person receives a fine but is financially unable to pay, the Austin Municipal Court judges will attempt to find alternatives to the fine such as community service work.

Will the police get special training on how to enforce these laws?

Yes. APD developed specific training materials for its officers to guide their enforcement of these new laws. The training materials emphasize both the importance of enforcing these laws and the options that officers have to achieve compliance without the need for citations and arrests whenever reasonable alternatives exist.

What are the provisions of the camping ordinance?

Camping means using public areas for living accommodations, including by:

Camping is prohibited in public areas in the City of Austin. Public areas are outdoor areas accessible to the public including a street, highway, park, parking lot, alleyway, pedestrian way, and the common areas of a school, hospital, apartment building, office building, transport facility, or business.

For the camping ordinance, the City of Austin has developed a phased approach. The plan, developed through collaboration across departments, focuses on safely and humanely helping people experiencing homelessness comply with the new ordinances. In practice, it emphasizes outreach and education, prioritizes health and safety, and facilitates connecting people with the appropriate resources and services.

Education and outreach are included in all phases of implementation, including coordination with City’s Homeless Outreach Street Teams, and, wherever possible, providing information about alternative options such as storing personal items, available shelter, and other resources. Officers aim to inform and encourage voluntary compliance before progressing to citations and/or arrest for violating the public camping ordinance.

Community engagement and education, during which APD will provide available resources and verbal warnings, except in the case of imminent threats to health or safety.

APD will generally issue written warnings, and may issue citations for violating the camping ordinance if they encounter individuals who have already been warned.

If a written warning has already been issued, APD will then issue a citation. Arrests for violating the camping ordinance will only be utilized in situations where individuals refuse to vacate areas that have been deemed dangerous for the public (e.g. flood prone or wildfire danger, next to a busy or high-speed roadway, etc).

If an APD officer issues a citation and the individual does not stop the prohibited conduct (e.g. voluntarily leave the area), APD will arrest the individual for violation of the camping ordinance, regardless of whether the area is specifically deemed dangerous for the public. When APD does arrest an individual for violation of the camping ordinance, that person will be processed through the Downtown Austin Community Court whenever possible.

Will the police confiscate the personal property of persons who are camping in public spaces?

Will the City have other temporary housing alternatives available for homeless persons once enforcement of the no-camping ordinance starts?

The City recognizes that the challenge of providing housing for homeless individuals in our community will not go away simply by enforcing a ban on camping in public areas. The City is committed to addressing this chronic problem comprehensively, and our Homeless Strategy Officer is working to address both the short and long-term housing needs of people experiencing homelessness in our community.

What are the “sit and lie” provisions of the ordinance?

The ordinance creates an offense for a person who, after having been notified by a law enforcement officer that their conduct violates the ordinance, is either asleep outdoors; or sitting or lying down either on a sidewalk or on an object placed on the sidewalk.  As further explained below, the ordinance applies only in a limited area of the City.

To ensure that people have adequate notice before they get a citation, APD will give people 30 minutes to come into compliance after receiving notice.

What areas of the City does the “sit and lie” ordinance cover?

The ordinance covers areas beyond the City’s traditional downtown boundaries, including areas east and north of the University of Texas campus, but not actual UT campus property. 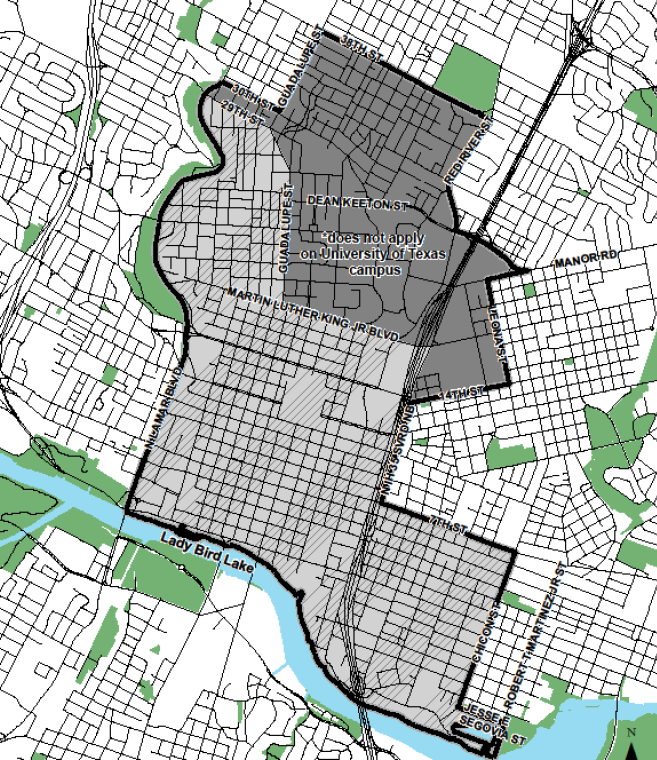 Are there exceptions to sitting and lying provisions of the ordinance?

Yes, individuals are NOT in violation of the ordinance if they are:

How will APD begin implementing and enforcing the “sit and lie” ordinance?

Until June 12, Austin Police are focused on outreach, education, and issuing warnings. Officers hope to work with individuals to get them to comply voluntarily, rather than resorting to citations right away. Officers are approaching individuals who are sitting, lying down, or sleeping outdoors in areas that present the most risk to their safety, like those near busy roadways or in areas that pose a higher risk for wildfire or flooding.

After June 13, police officers began giving individuals verbal notice that they are in violation of the ordinance and providing them with a minimum of 30 minutes to stop the behavior before issuing a citation.

Restrictions on Panhandling or Solicitations (Section 9-4-13)

What are the restrictions on panhandling or solicitations?

The ordinance prohibits “solicitation in an aggressive manner in a public area” throughout the city. It also prohibits all solicitations in specific areas and specific times of day.

Specifically, the ordinance prohibits solicitations within the boundaries of the City of Austin:

Here are a few helpful definitions (as stated in the ordinance):

Aggressive solicitation behaviors may overlap with other legal offenses including disorderly conduct, obstructing highway or other passageway and assault. If police officers find that a person’s conduct contains the elements of these offenses, and there is probable cause, they can pursue enforcement of such offense(s).

This webpage will continue to be updated as more information and resources are available to help all community members, including those without housing, understand implementation and enforcement of Proposition B. Last updated: 8/11/2021