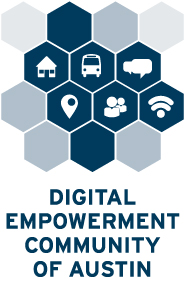 The Community Technology & Telecommunications Commission adopted policy that the City of Austin should periodically engage in a residental technology survey to develop a profile of the information and communication technology means, skills, and needs in the community; the survey should be revised and administered at three year intervals.

The Telecommunications and Regulatory Affairs Office (TARA) manages the implementation of the Digital Inclusion Strategic Plan, adopted by the Austin City Council in 2014. The Plan is supported by the outcomes of a periodic residential technology survey (the survey) that evaluates and assesses residents’ access to technology resources and literacy and training programs. This Interlocal Agreement with the University of Texas at Austin – Department of Radio, Television and Film serves to develop the survey to be sent to households identified by examining neighborhood demographics, including data gathered during the previously conducted surveys which commenced in 2011 and 2014.

The sample of residents were sent a postcard announcing that they were selected to participate in the survey; a few days later, they received the survey with a postage-paid return envelope. A follow up reminder postcard was sent a week later to participants who did not respond. Each survey recipient received a URL to complete the survey online instead of the paper-and-pencil version. The esimate for respondents to complete the survey was less than twenty minutes.

The above links require an access code provided to 11,000 residents who received a random sample survey via postal delivery.  While this link is not available for those without a code, this survey is intended to fulfill Digital Inclusion Program Objectives to evaluate and assess residents' access to technology resources and literacy and training programs and to identify unmet needs and barriers.  The 2018 survey can be viewed in both English and Spanish.

As a follow-up to the 2018 report, the City and University of Texas researchers conducted a second, slightly reduced version, of the survey with residents who used public access and training services of several major City partners. While the main survey was a random sample of City residents, the follow-up was a purposive sample that targeted more disadvantaged, lower income residents that did not respond in significant numbers to the original mail survey. This sample was reached by working through major City digital inclusion partners to survey their clients or users.

Additional information regarding the Austin Digital Assessments from 2018, 2014, and 2011 may be found on our Bloomfire site or the City of Austin Open Data Portal.