Beginning September 1, 2021, HB1927 made it legal in Texas for most people 21 or over to carry a handgun in a holster without a permit both openly and/or concealed.

This law modified the previous open carry law from 2016 by eliminating the requirement to have a license to carry.

This means that most people 21 or over may carry a handgun without a license to carry.

The following is allowed by law for handgun owners:

Please be advised that handguns and other weapons are prohibited in these places:

Still have questions? We have answers.

Where is it legal to open carry?

Where is it not legal to openly carry?

What weapons are not allowed to be carried openly?

Do public schools have to post "no carry" signs or are they just understood "no carry" zones?

What should citizens do if a business tells them they cannot have their gun exposed but they don't have the prohibited sign posted?

Is there a limit to the number of firearms you can carry?

Have APD officers been trained on the new permitless carry law?

Have 911 call takers been trained on the new permitless carry law?

Can private businesses opt out of concealed, open and permitless carry? 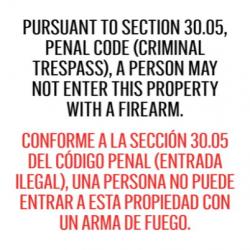 Can city employees open carry on the job?

Does this change the law for open carrying of Long Guns (shotguns and rifles)?

Find more information about Handgun Licensing in Texas from the Texas Department of Public Safety.