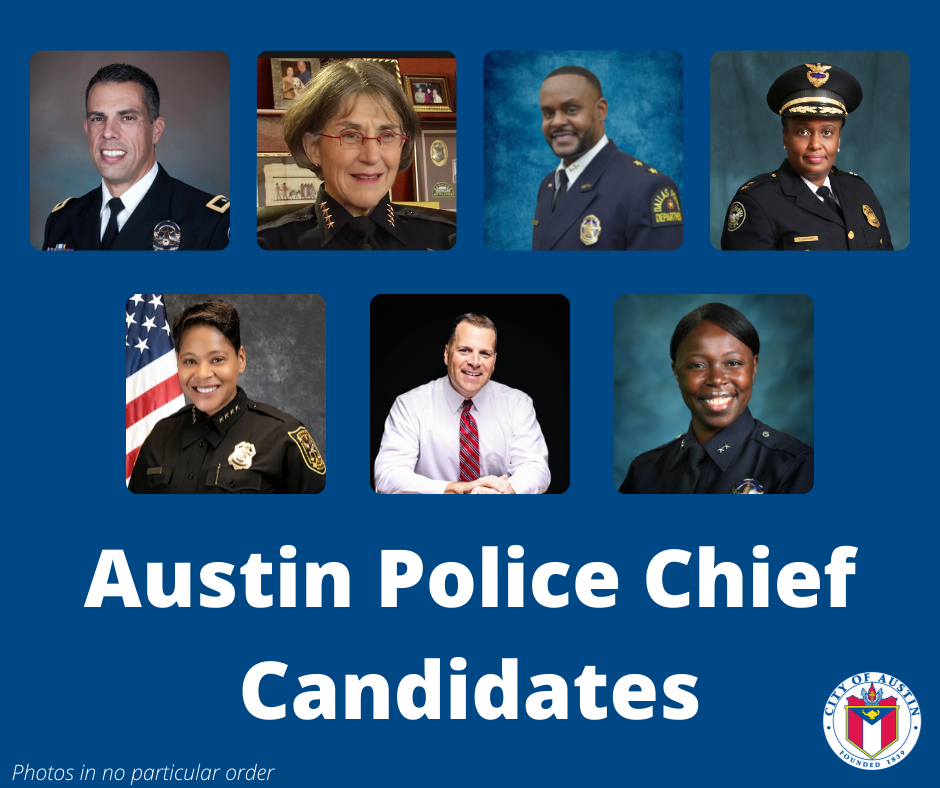 The City Manager hopes to announce a new Chief of Police before the end of August.

Austin City Manager Spencer Cronk has announced the top seven candidates for the Chief of Police position out of a field of 46 applicants.

Finalists for the position are:

The City Manager hopes to announce a new Chief of Police before the end of August.

The Chief of Police will oversee 1,809 sworn officers and 734 non-sworn professional staff and has a FY 20-21 budget of $240.8 million. Like many major cities in America, Austin is reimagining how it provides public safety services. Austin is approaching this process in a methodical and strategic approach, and the next Chief of Police will begin their duties during a period of intense change for the Austin Police Department (APD). The challenges and opportunities related to this initiative alone are many. The Chief of Police will help APD and the City adapt and emerge from reimagining law enforcement in a manner that improves public safety for all who visit, live, and work in Austin.

“I am excited about the diverse slate of individuals we have identified for this position,” said Cronk. “I look forward to discussing with them how we can accomplish the goals of the community and the City Council.”

In March, a survey was released to the public asking them to identify the skills and characteristics, background and experience, and top priorities they believed were most important for the next Chief of Police. The responses to the survey helped establish the selection criteria for the position.

“Thank you to everyone who participated and shared their thoughts throughout this process through online feedback, virtual meetings, or via 311,” said Cronk. “We received input that our community members want to see the next Chief have exceptional communication skills and create dialogue with the community. They want to see the Chief be reform minded and transparent and have a track record of fostering community involvement and accountability. The candidates selected show these characteristics in various ways.”

Applications for the position opened April 26, 2021.

Interviews with the Chief of Police candidates will occur in the coming weeks, with several community input opportunities on the top finalists.

Joseph Chacon -Joseph Chacon is the Interim Chief of Police with the Austin Police Department, a role he has served in for four months. Prior to his appointment, Chief Chacon served as an Assistant Chief for almost five years, overseeing Patrol, Special Operations, Specialized Patrol, Investigations, Intelligence, Professional Standards and Training/Recruiting.

Chacon has a Master’s Degree in Public Administration and a Bachelor of Applied Arts and Sciences.  He is a graduate of PERF’s Senior Management Institute for Police, Texas State University’s Certified Public Manager Program, and MCCA’s Police Executive Leadership Institute.

Anne Kirkpatrick - Anne Kirkpatrick started her policing career in 1982 in the Memphis Police Department. During her 38 years in policing she has been with 8 agencies, 4 as a Chief of Police. She has a BA in Business Administration, a Master’s in Counseling, a Law degree and she has been a licensed attorney for 30 years. Kirkpatrick is also a graduate of the FBI National Academy, the FBI’s Law Enforcement Executive Development School and the FBI’s National Executive Institute.

Celeste Murphy - Deputy Chief Celeste Murphy joined the Atlanta Police Department in 1997, and has served in every rank from Patrol Officer, Detective, Sergeant, Lieutenant, Captain, and Major.  Appointed to Deputy Chief in January 2020, she manages the Community Services Division

She holds a Bachelor of Arts degree in Mathematics and a Master of Criminal Justice.  Chief Murphy is a graduate of the Police Executive Research Forum’s Senior Management Institute for Police and Northwestern University School of Police Staff and Command.

Mirtha V. Ramos - Chief Mirtha V. Ramos began her law enforcement career in 1997 with the Miami-Dade Police Department.  She served in various assignments, including uniform patrol, investigations, emergency management, community policing, and police administration.  She rose through all the civil service ranks until her appointment to Police Major and subsequently to Division Chief, managing the high liability functions of the Department.  On November 4, 2019, Chief Ramos was appointed to Chief of the DeKalb County Police Department.

She holds a master’s degree in Psychology of Leadership and is a graduate of the FBI National Academy in Quantico, Virginia.

Gordon Ramsay - Gordon Ramsay has been a police chief for fifteen years and is nationally recognized for his work in community policing, mental health, victim services, race relations, and reconciliation. He currently serves as chief of the Wichita Police Department .

He holds a B.A. in Criminology and Sociology, an M.A. in Management, is a graduate of the FBI National Academy, and serves on the Major City Chiefs Association Executive Board.

Emada E. Tingirides - Emada E. Tingirides is a Los Angeles Police Department (LAPD) Deputy Chief. In 1995, she joined the LAPD to serve the city her family called home for generations. Mayor Eric Garcetti and Chief of Police Michel Moore promoted Emada to Deputy Chief and she was named the Commanding Officer of the newly formed Community Safety Partnership Bureau (CSPB). The relationship-based public health approach policing model that defines CSPB was born to find new and innovative ways to build trust, relationships, and address quality of life issues in some of Los Angeles’ most underserved and challenging communities.

Tingirides holds a B.S. in Criminal Justice and an M.A. in Criminology, Law, and Society.