Proposition A: Approving the City’s property tax rate and dedicating 8.75 cents of the operations and maintenance portion of the tax rate for Project Connect, a high-capacity transit system. See the Project Connect website for up-to-date information about next steps and ways to get involved.

Proposition A asked voters to vote for or against approving the maintenance and operations portion of the City’s property tax rate and dedicating 8.75-cents towards the implementation of Project Connect, and ensuring that the initial investment is completed. See a map of the proposed initial investment here.

Federal funding is anticipated to provide approximately 45% of the program’s estimated $7.1 billion capital cost. The property tax revenue will provide funding for the rest of the capital cost plus operations and maintenance of the transit system once built. The initial investment also includes $300 million for transit-supportive anti-displacement housing strategies.

The dedicated property tax revenue, along with Capital Metro revenue and Federal funding, will be directed to a new, independent government organization called the Austin Transit Partnership. This organization will oversee, finance and implement Project Connect.

The Proposition appeared on the official ballot in substantially the following form, and the ballot was prepared to permit voting "for" or "against" the Proposition:

"Approving the ad valorem tax rate of $0.5335 per $ 100 valuation in the City of Austin for the current year, a rate that is $0.0875 higher per $100 valuation than the voter-approval tax rate of the City of Austin, for the purpose of providing funds for a citywide traffic-easing rapid transit system known as Project Connect, to address traffic congestion, expand service for essential workers, reduce climate change emissions, decrease traffic fatalities, create jobs, and provide access to schools, health care, jobs and the airport; to include neighborhood supportive affordable housing investments along transit corridors and a fixed rail and bus rapid transit system, including associated road, sidewalk, bike, and street lighting improvements, park and ride hubs, on-demand neighborhood circulator shuttles, and improved access for seniors and persons with disabilities; to be operated by the Capital Metropolitan Transportation Authority, expending its funds to build, operate and maintain the fixed rail and bus rapid transit system; the additional revenue raised by the tax rate is to be dedicated by the City to an independent board to oversee and finance the acquisition, construction, equipping, and operations and maintenance of the rapid transit system by providing funds for loans and grants to develop or expand transportation within the City, and to finance the transit-supportive anti-displacement strategies related to Project Connect. Last year, the ad valorem tax rate in the City of Austin was $0.4431 per $100 valuation."

The planned light rail system includes a new rail system with 27 miles of service and 31 stations, along with the following lines:

Light rail is proposed to travel underground downtown. The City expects operating rail service beneath the streets to increase the system’s travel time reliability and to be safer than operating at street level.

The plan proposes 15 new neighborhood circulators, on-demand pickup and drop-off to locations within zones. Circulators provide first-mile/last-mile service and connections to transit stations and other destinations.

The tax rate includes $300 million for transit-supportive anti-displacement housing strategies. These strategies will be guided by the Austin Strategic Housing Blueprint and Federal Transit Administration, and the needs of the communities for housing along the Project Connect System Plan.

For the typical Austin homeowner, the tax bill for the all taxing jurisdictions is based on a tax rate of $2.16 per $100 of value. Proposition A will increase the tax rate by 8.75 cents, or approximately 4%; the impact on total tax bill is also approximately 4%. (See charts below.) 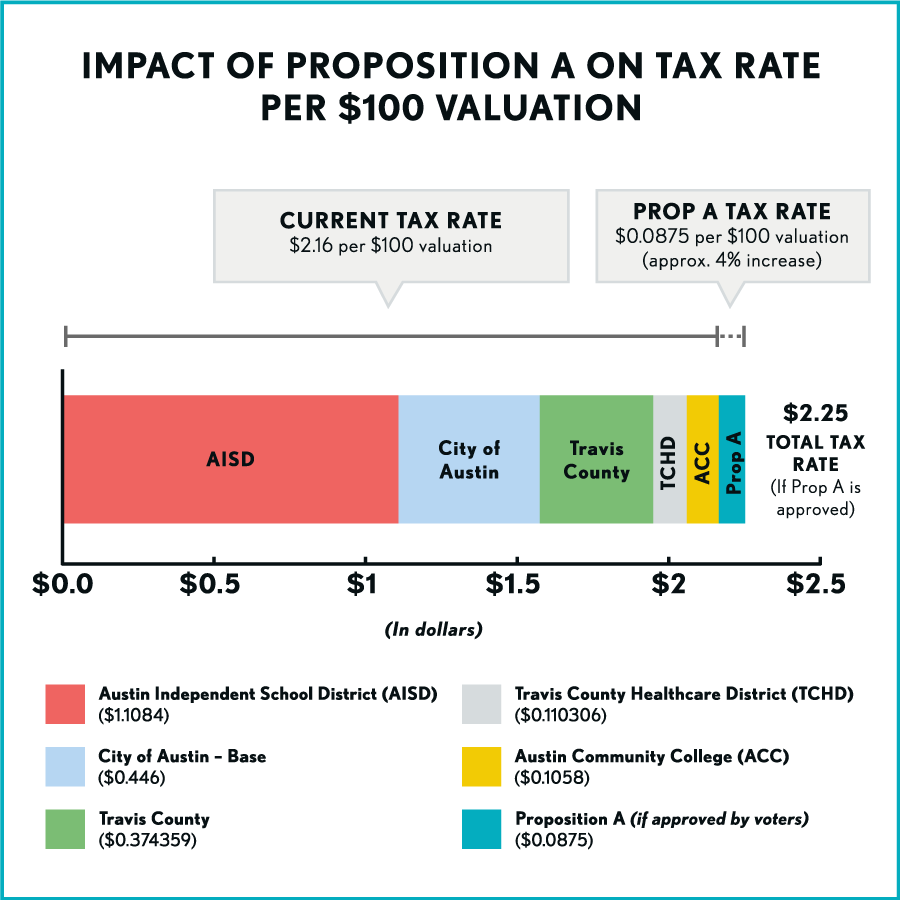