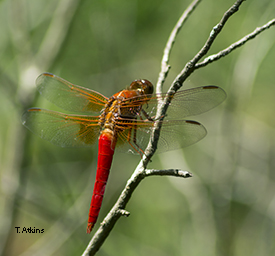 Spotted! This Neon Skimmer (Libellula croceipennis) was spotted here in Austin! A native to Texas, the neon skimmer can also be found around the Southwest including Arizona and Southern California. Known for its vivid red color and unusual mating patterns, skimmers are often seen hanging out around lakes and ponds in Central Texas. Their mating ritual is quite entertaining to watch, while the males can be seen on the lookout for females from tall spears of grass, females are often oblivious to their counterpart’s presence. Males typically approach females with an inflated abdomen clearly visible by her and observers.

With this, the neon skimmer’s characteristic courtship begins, females often flee and cause what one would describe as a wild goose chase as the male follows her. Once successfully courted, the Neon Skimmer is observed mating, no longer than 30 seconds, on twigs or occasionally in flight. The female’s process of laying eggs is quite the show! While she quickly flies, hovering over the water, she glides her abdomen in the water then flings the egg with droplets of water on shore, while the male temporarily stands guard by threatening other males by lowering their abdomen.

Next time you find yourself near your local swimming hole, keep your eyes peeled for these spectacular creatures flying about!

How Structured is Your Lake?