Shorelines are a very important part of the lake ecosystem. Poor biological health is three times more likely in lakes with poor lakeshore habitat, according to the EPA. Healthy, natural shorelines can improve water quality and floodplain function, reduce the erosive impacts of waves, and provide nurseries for juvenile fish, habitat for shorebirds, places for turtles to lay eggs, and much, much more. Unfortunately, some areas of Lake Austin’s shoreline are eroding. Although some of this erosion is due to the natural process of river evolution, it is likely that much is due to wave action from intense recreational use. 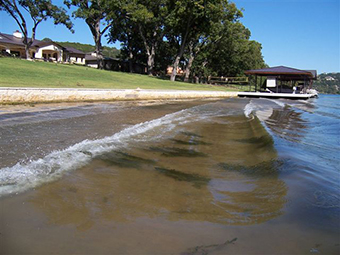 Waves slamming the shore from recreational use 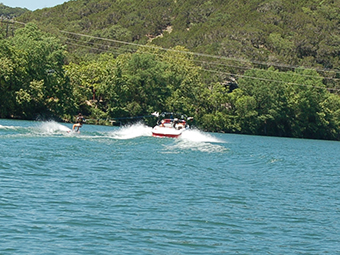 In addition to loss of habitat, shoreline erosion increases sediment washing into the lake, which can reduce clarity, impact fish communities and may increase nutrients. An old strategy for shoreline stabilization was to construct a vertical wall (called a bulkhead), but these walls have negative effects that may be worse than the erosion. A natural shorelines gradual slope absorbs the energy of waves, while a steep, eroded slope or vertical wall allows waves to crash into the shore, drastically increasing erosion. Bulkheads also destroy habitat and disconnect the aquatic environment from access to terrestrial environment. 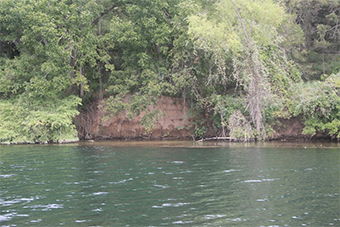 So what can we do to save our beloved shores? In an effort to address the need for an inexpensive and progressive method for shoreline stabilization that restores both stability and environmental function, in 2009 the City of Austin Watershed Protection Department initiated a small-scale study to stabilize shorelines with coir (coconut husk fiber) logs and the planting of wetland vegetation. 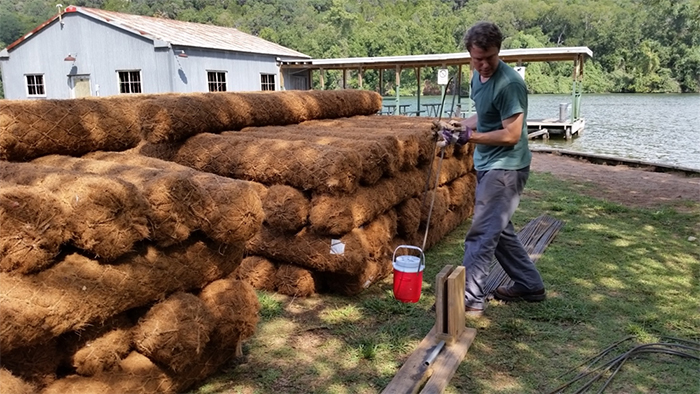 Coir logs, woven logs made of coconut husk fiber, are staged and prepped at Commons Ford Park for shoreline installation.

Results of the monitoring period (Sep 2009 – May 2014) indicate that the method can successfully stabilize eroding sections of the Lake Austin shoreline by dissipating wave energy while promoting growth and recruitment of native plants. Observations of the study included increased stabilization of the shoreline, slow decomposition of coir material, and proliferation of Native American water-willow (Justicia americana). These sites become colonized by native wetland plants as well. One site had twelve new species emerge at the newly stabilized shoreline. 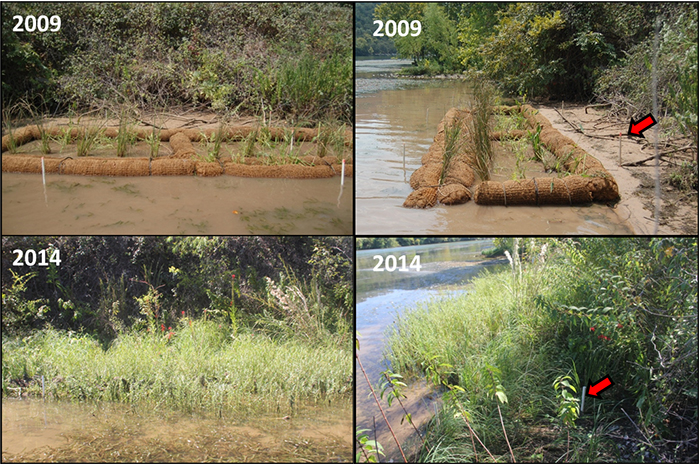 Before and after pictures of two coir log shoreline stabilization sites on Lake Austin from the study conducted from 2009-2014.

Due to the success of the pilot study, the City of Austin expanded the strategy on an additional 0.4 mile of publically owned Lake Austin shoreline in fall 2014. Over 500 coir logs were installed and over 800 aquatic plants were planted, consisting of American water-willow, Emory’s carex (Carex emoryi), and Common three-square (Schoenoplectus pungens). Since installation, sites are already showing signs of sediment retention and stability. Juvenile fish have also been seen taking refuge between coir logs. The City of Austin will continue to monitor these sites for years to come with the hope that this more ecologically sensitive method of bank protection will increase in popularity among homeowners.

Resources for creekside and lakeside homeowners: