To implement elements of the Imagine Austin Comprehensive Plan, the 2014 Austin Bicycle Plan's goals are to significantly increase bicycle use and improve safety for people riding bicycles throughout Austin. To achieve these goals, an All Ages and Abilities Network is being built out to provide additional transportation options for Austin residents and visitors. Austin City Council adopted the plan on Nov. 6, 2014. 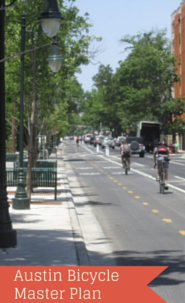 Previous action by boards and commissions