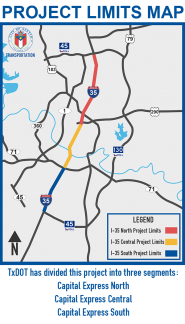 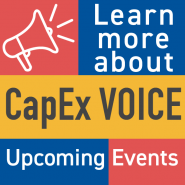 The I-35 expressway through the heart of Austin and Central Texas is being reconstructed to address safety, mobility and east-west connectivity needs. The Texas Department of Transportation is leading the project to make improvements to I-35 in Travis County from SH 45 North to SH 45 Southeast. This page provides details of the City of Austin's role and involvement in partnership with TxDOT to achieve this vision, and how you can participate, as well.

About the I-35 Capital Express projects

I-35's Austin-area section carries nearly 200,000 vehicle trips per day, 85% of which are local to the region. The roadway has evolved since its construction in the 1950s to become a critical mobility link connecting Austin, Central Texas and beyond.

The highway's construction and current design on top of East Avenue also had consequences, becoming a physical barrier between East and West Austin, and perpetuating racial and economic divisions for decades. The City of Austin first established a racial barrier along East Avenue by adopting its 1928 land use plan that segregated the city for years. Austin has long since removed the segregationist language from its legal code and land use plan, but the physical barrier has remained. The redesign and construction of the new I-35 Capital Express has a role to play in rectifying this historical inequity for Central Texas. The Austin Transportation Department seeks to address this historical barrier in our approach to partnering with TxDOT.

The reconstruction of I-35 is one of the most important mobility projects for the Central Texas region, and critically important for all partners to get right for the future of the area. Along with the major transit investment our community is making with Capital Metro, this project will have a long-term footprint on the fabric of our community.

Not only is this project important for freight movement and automobile users, the I-35 corridor is also important for transit riders. Capital Metro currently operates MetroExpress, MetroFlyer, and UT Shuttle bus routes along the corridor and has plans to expand transit service on I-35 as part of the Project Connect system plan. That proposed expansion includes new service opportunities to outlying Austin neighborhoods and suburban cities, new park-and-rides, new prioritization for transit on future managed/HOV lanes, and preferential transit access ramps. All of these new transit enhancements are dependent on the design of the future I-35.

The City of Austin has been a partner with TxDOT since the inception of the reconstruction program and was an early funder for design and environmental efforts.  We have consistently represented our residents in seeking an improved I-35 that prioritizes the movement of people and goods through the corridor, improves the efficiency in accessing the downtown and central Austin street grid system, improves east-west connectivity, improves safety and promotes non-motorized bicycle and pedestrian activities.

Why I-35 needs to be replaced

The City of Austin's role

In a 2010 bond election, Austin residents authorized a $1 million engineering analysis to examine how to improve I-35 within its existing footprint. The City of Austin has since worked with TxDOT and other transportation agencies to identify short-, mid-, and long-term strategies to improve I-35 through the metropolitan area. As TxDOT embarks on the long-term construction projects, estimated to total $5.6 billion, the City of Austin is a Participating Agency in TxDOT’s National Environmental Policy Act (NEPA) study that is required of federally funded projects.

The City of Austin departments have consolidated our comments on TxDOT's scoping materials and environmental publications to date for the Capital Express Central project, and the Austin Transportation Department commented on TxDOT’s public hearings for the North and South I-35 environmental assessment processes.

The City of Austin's goals

Austin City Council passed a resolution to TxDOT on March 25, 2021 supporting the goals provided by City staff, including:

Our Future 35 is a community-centered initiative to build new city infrastructure and co-create public spaces over the I-35 highway.

Because the Texas Department of Transportation (TxDOT) is proposing to widen and lower portions of I-35 through central Austin, the City has an opportunity to re-connect East and West Austin through new "caps" and "stitches" that can assist in making important strides toward unifying and mending the divide created by the original construction of I-35 and replacing it with amenities that celebrate and connect all Austinites.

Working alongside and in collaboration with TxDOT's freeway project, Our Future 35 - Austin's Cap and Stitch Program is a community-centered effort to co-create new public spaces over I-35. The project will reconnect East and West Austin physically, socially, and economically after decades of divide.

Our Future 35 is a once-in-a-generation opportunity to re-stitch our community and create community benefits for those who have been harmed by past decisions. Learn more about this project and get involved here.

A Citizen’s Guide to NEPA: The Council on Environmental Quality (CEQ) January 2021

Our Future 35: A collaboration between the Downtown Austin Alliance and a diverse coalition of Austin leaders

Areas of Persistent Poverty along the I-35 corridor - Illustrative map.pdf

TxDOT is providing multiple methods for residents to give their feedback.

Visit: TxDOT's I-35 website to learn more about the Central, North and South Capital Express projects.

Ask: Request a presentation to your civic organization or neighborhood association. Call 512-832-7357 or email My35CapEx@txdot.gov.