Mosquitos are in your face again. Every year around this time a few citizens reach out to the Surface Water Team of the Watershed Protection Department because they think that droves of mosquitoes are emerging from the neighborhood creek or pond. City environmental scientists have found that this has not yet been true and that the real story is much more insidious.

Let’s start with the lowly mosquito, a little fly (Mosquito is Spanish for “little fly”)

At best, they seem to be a quick snack for dragonflies and at worst, they are a vector for disease. They have changed the course of human history and remain an important part of the ecosystem, but most of us know very little about them. Besides the basic understanding that they spend their larval stages in water and emerge as adults, most people don’t know anything about the diversity, intrigue, details and ramifications of their life cycle. If they did, we probably wouldn’t have as many mosquitoes buzzing around. The Xerces Society www.Xerces.org has great information if you are interested. Mosquito larvae are delicious food for a lot of fish, frogs and predatory aquatic insects like dragonflies, damselflies and beetles. Due to these predators, mosquitos have generally evolved to avoid laying eggs in locations where their predators live (like streams and ponds). As a testament to this, for over 19 years the environmental scientists of the City of Austin have been monitoring water quality in creeks by collecting aquatic bugs and their records show that out of the 763,126 invertebrates collected to date, there were only 1,440 mosquitos, which is less than two-tenths of one percent (0.0019)! 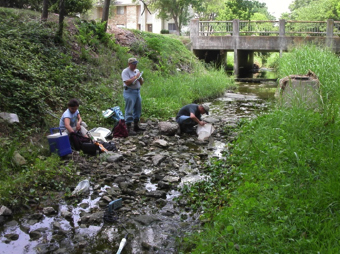 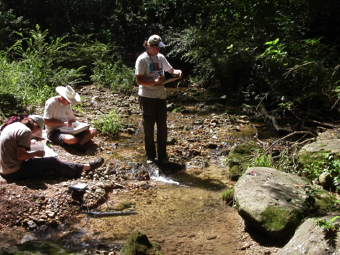 So if the creeks and ponds aren’t chock full of larvae, where are all the mosquitoes coming from?

In our area, mosquitoes that typically bite us fall in to a group often referred to as “container breeding mosquitoes.” These species select small, temporary, stagnant habitats as their egg-laying sites because those areas don’t have predators that prey on the larvae. Their natural habitats are places like cavities in trees, pools of rainwater on top of bedrock and small puddles left from receding floodwaters. These pools just need to be as big as a tablespoon of water, last for about a week and are usually nutrient-poor. Residential areas provide an explosion of new habitat options ranging from clogged gutters, French drains, pet dishes, bird baths, buckets, potted plants, old tires, tarps, forgotten cups and lots and lots of trash (http://mosquitosafari.tamu.edu/index.swf). The trade-off for developing in these nutrient-poor habitats is that female mosquitoes must supplement their normal diet of plant nectar to produce eggs, and they do this by stealing a blood meal from a host animal, which varies depending on the species of mosquito. Most often the sources of nuisance mosquitoes are found within a few feet of the home of the resident calling in a complaint. Species such as the Asian tiger mosquito rarely fly more than 50 feet to bite, and their average lifetime flight distance is less than 200 yards. 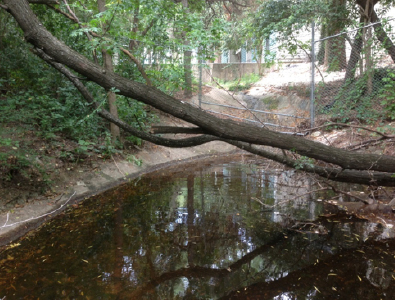 This pool in a creek didn’t have any mosquitos, probably because of the fish and dragonflies. 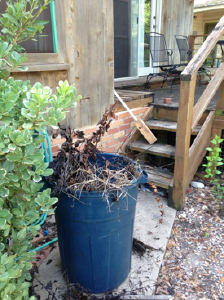 Can you spot the mosquito nursery in this picture?

When environmental scientists from the City respond to citizen requests to investigate a creek near the source of a mosquito complaint, the sampling reveals that mosquitoes are rare or absent from the creek, but are numerous in nearby containers. These pictures show the results of recent investigations. The picture of the trash can near a house is where hundreds of mosquito larvae were found, but the nearby pool of water in a creek (which was blamed for the mosquitos), didn’t reveal any larvae.

What should I do?

The historic strategy of scorched-earth, broad-spectrum mosquito management has led to environmental disasters both on large and small scale. Attempts to treat ponds and creeks would kill a lot of other invertebrates and it would not even be effective at controlling the species that bite most frequently (the container breeding species that live around homes). The most effective way for homeowners to control container breeding mosquitoes is to conduct a careful inspection of areas around the home and to reduce or eliminate containers of standing water adjacent to the home. Bird baths and pet dishes are okay, as long as the water is not allowed to stand for more than 4 days. When treatment is absolutely necessary, fungal and/or bacterial treatments are better than broad spectrum pesticides as they are better suited to targeting mosquitoes and other flies without affecting other beneficial organisms. These types of treatment are most effective when they were used in proper places like gutters, rain barrels, yard drains, air conditioner condensate collectors, etc.

The Xerces Society www.Xerces.org published an excellent article in 2013 by Mazzacano and Black that is a thorough and detailed review of practices, risk, benefits and recommendations called “Ecologically Sound Mosquito Management in Wetlands”.